Three on a Limb

Three on a Limb is a 1936 American short comedy film directed by Charles Lamont and starring Buster Keaton. [1]

At a roadside diner a scout named Elmer pulls up for lunch and is immediately smitten with a waitress named Molly. Molly's fiancée, a traffic warden named Homer arrives and gives Elmer a ticket but Molly allows Elmer to drive her home and while backing up he accidentally runs over Homer's motorcycle.

Molly reveals her parents are trying to pressure her into marrying Homer but he is not in love with him. Molly introduces her parents to Elmer and they instantly disapprove of him due to his appearance and outfit. Molly's father challenges Elmer's scout skills by getting him to prove he can make a fire by rubbing two sticks together. Elmer accidentally sets fire to Molly's parent's rug. He attempts to extinguish the fire with a hose but there is a knot in the tube which stops the water from coming out. Homer arrives and sees the knot, he unties it and is sprayed with the water from the hose.

As Elmer and Molly clean up the mess, Molly's father tells Homer to propose to Molly immediately. Elmer attempts to gain Molly's father's blessing to propose to Molly and is told to go and fetch a justice of the peace, however this is a ruse so that the justice can marry Molly and Homer instead. Homer throws Elmer out of the house so he can marry Molly in peace. Outside, Elmer saves a man named Oscar from his wife whom he was intending to leave for another woman. In return Elmer asks for Oscar's help putting a stop to the wedding. However, when the two arrive at the wedding Oscar recognizes Molly as the woman he was going to leave his wife for. Elmer, Oscar and Homer engage in a three way scuffle each attempting to marry Molly. Eventually Oscar's wife shows up and causes chaos in the house. Elmer and Molly manage to sneak away with the justice of the peace and are finally married

Joseph Frank Keaton, known professionally as Buster Keaton, was an American actor, comedian, film director, producer, screenwriter, and stunt performer. He is best known for his silent films, in which his trademark was physical comedy with a consistently stoic, deadpan expression that earned him the nickname "The Great Stone Face". Critic Roger Ebert wrote of Keaton's "extraordinary period from 1920 to 1929" when he "worked without interruption" on a series of films that make him "the greatest actor-director in the history of the movies". His career declined afterward with a loss of artistic independence when he signed with Metro-Goldwyn-Mayer, his wife divorced him, and he descended into alcoholism. He recovered in the 1940s, remarried, and revived his career as an honored comic performer for the rest of his life, earning an Honorary Academy Award in 1959.

Three Ages is a 1923 black-and-white American feature-length silent comedy film starring comedian Buster Keaton and Wallace Beery. The first feature Keaton wrote, directed, produced, and starred in, Keaton structured the film like three inter-cut short films. The structure also worked as a satire of D. W. Griffith's 1916 film Intolerance. The film was shot in this manner as a kind of insurance for the studio. While Keaton was a proven success in the short film medium, he had yet to prove himself as a feature-length star. Had the project flopped, the film would have been broken into three short films, each covering one of the 'Ages.' 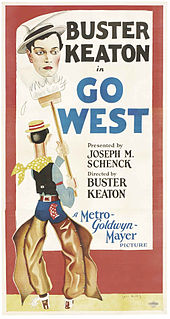 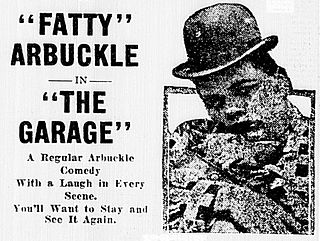 The Garage is a 1920 American two-reel silent comedy film directed by and starring Roscoe "Fatty" Arbuckle and featuring Buster Keaton. This was the fourteenth and last film starring the duo before Keaton set up his own studio and Arbuckle started making feature-length films. The film also stars Luke the Dog, who starred in many other short comedies with Arbuckle. The film was also known as Fire Chief.

Joseph Hallie "Joe" Keaton was an American vaudeville performer and silent film actor. He was the father of actor Buster Keaton and appeared with his son in several of his films.

The Rough House is a 1917 American two-reel silent comedy film written by, directed by, and starring both Roscoe "Fatty" Arbuckle and Buster Keaton. The Rough House was Keaton's first film as a director.

Allez Oop is a 1934 American short comedy film starring Buster Keaton. It was the second film Keaton made for Educational Pictures.

Tars and Stripes is a 1935 American Educational Pictures short comedy film directed by and starring Buster Keaton. The film was shot at the Naval Training Center San Diego, California.

What - No Beer? is a 1933 Pre-Code comedy film released by Metro-Goldwyn-Mayer directed by Edward Sedgwick and starring Buster Keaton and Jimmy Durante. MGM had also paired Keaton and Durante as a comedy team during this period in The Passionate Plumber and Speak Easily.

The Buster Keaton Story is a 1957 American drama film directed by Sidney Sheldon and written by Sidney Sheldon and Robert Smith. The film stars Donald O'Connor, Ann Blyth, Rhonda Fleming, Peter Lorre, Larry Keating and Jackie Coogan. It was released on April 21, 1957, by Paramount Pictures. The film was described by AllMovie as "sublimely inaccurate" regarding details of Keaton's life. It was produced by Paramount Pictures, which paid Keaton $50,000 for the rights to his life story.