Three star or three stars is a grading received in a star classification scheme.

Stars are often used as symbols for ratings. They are used by reviewers for ranking things such as films, TV shows, restaurants, and hotels. For example, a system of one to five stars is commonly employed to rate hotels, with five stars being the highest quality.

Three star or three stars may also refer to:

The three stars in ice hockey are the three best players in a game as chosen by a third party, with the first star considered the best of the three players, akin to the Player of the match in other sports. Usually, the top point scorers or outstanding goaltenders are designated the three stars, but other players may be considered by affecting the game by other means.

Three Star Club is a Nepali football club based in Patan, Lalitpur. They play in the Nepalese first division, the Martyr's Memorial A-Division League.

"Three Stars" is a song written by Tommy Dee in 1959, as a tribute to Buddy Holly, Ritchie Valens, and J.P. Richardson, who died in a plane crash earlier that year. The song was recorded by Tommy Dee with Carol Kay and first released on April 5, 1959, by Crest Records. It sold over one million copies and was awarded a gold disc.

"Theme From Dr. Kildare" is a song written by Jerry Goldsmith, Pete Rugolo and Hal Winn.

A star is a luminous astronomical object. 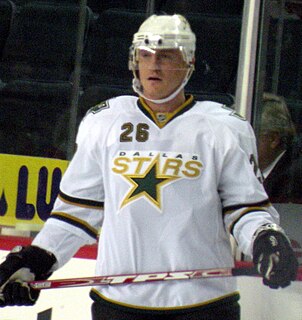 Jere Kalervo Lehtinen is a Finnish former professional ice hockey forward. A right winger, he was drafted in the third round, 88th overall, in the 1992 NHL Entry Draft by the Minnesota North Stars. Lehtinen played his entire 15-year National Hockey League (NHL) career with the North Stars/Dallas Stars organization. A two-way forward, Lehtinen is perhaps best known for his defensive responsibilities, for which he won the Frank J. Selke Trophy three times as the NHL's top defensive forward. After his retirement, he has served as the general manager of the Finnish national ice hockey team.

A defender is usually a participant in defense (military) or defense (sports).

Julie Wu Chu is an American Olympic ice hockey player who plays the position of forward on the United States women's ice hockey team and the position of defense on Les Canadiennes. She won the Patty Kazmaier Award in 2007 for best female collegiate hockey player while at Harvard University. She finished her collegiate career as the all-time assists leader and points scorer in NCAA history with 284 points until the record was snapped in 2011. She is tied as the second-most decorated U.S. female in Olympic Winter Games history. She was selected by fellow Team USA members to be the flag bearer at the Closing Ceremony of the 2014 Winter Olympics in Sochi.

A Red star is an important ideological and religious symbol. 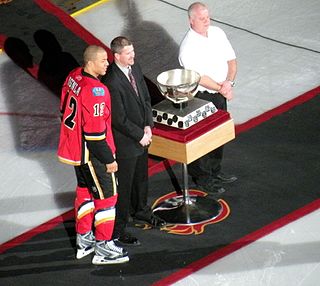 The Molson Cup is an award presented to a distinguished player on Canadian ice hockey teams. After each game, the "three game stars" are selected, usually by a member of the media. At the end of the season, the player with the most three-star honours is presented with the Molson Cup. Most teams also donate money to charity in the name of the winner of each monthly segment winner during the season.

J20 SuperElit is a junior ice hockey league composed of 20 teams in Sweden. It is the highest-level junior ice hockey league in Sweden. The teams are divided in two groups, or divisions, Norra (North) and Södra (South), and are usually associated with a professional team in either the Swedish Hockey League (SHL) or HockeyAllsvenskan in order to develop talented youth for the professional teams. The winning team of the J20 SuperElit playoffs is awarded the Anton Cup. 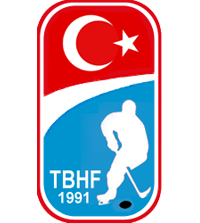 The New Hampshire Wildcats represent the University of New Hampshire. They have won five ECAC championships between 1986 and 1996. When the Wildcats joined Hockey East, they won four Hockey East titles from 2006 to 2009. The Wildcats have more wins than any other women's ice hockey program at 668 in its first 32 years. The Wildcats went undefeated in their initial 74 games (73-0-1) spanning the 1978 through 1982 seasons. A UNH goaltender has been declared Hockey East Goaltending Champion in the first six years of the league’s existence. From 2007 to 2009, UNH hosted NCAA Tournament Regional home games.

Texas Star is a Ferris wheel at Fair Park, Dallas, Texas, US.

Ice hockey in Australia is only a moderately popular sport, with low participation and spectator attendance figures when compared with many other sports played in the country.

Iceman, The Iceman, Ice Man, or Ice Men may refer to: