Thrombin inhibitor may refer to:

Ximelagatran is an anticoagulant that has been investigated extensively as a replacement for warfarin that would overcome the problematic dietary, drug interaction, and monitoring issues associated with warfarin therapy. In 2006, its manufacturer AstraZeneca announced that it would withdraw pending applications for marketing approval after reports of hepatotoxicity during trials, and discontinue its distribution in countries where the drug had been approved. 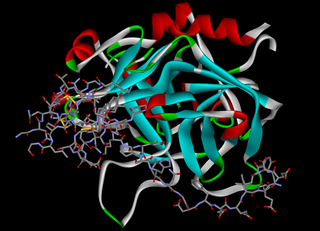 Hirudin is a naturally occurring peptide in the salivary glands of blood-sucking leeches that has a blood anticoagulant property. This is fundamental for the leeches’ alimentary habit of hematophagy, since it keeps the blood flowing after the initial phlebotomy performed by the worm on the host’s skin.

Argatroban is an anticoagulant that is a small molecule direct thrombin inhibitor. In 2000, argatroban was licensed by the Food and Drug Administration (FDA) for prophylaxis or treatment of thrombosis in patients with heparin-induced thrombocytopenia (HIT). In 2002, it was approved for use during percutaneous coronary interventions in patients who have HIT or are at risk for developing it. In 2012, it was approved by the MHRA in the UK for anticoagulation in patients with heparin-induced thrombocytopenia Type II (HIT) who require parenteral antithrombotic therapy.

Dabigatran, sold under the brand name Pradaxa among others, is an anticoagulant used to treat and prevent blood clots and to prevent stroke in people with atrial fibrillation. Specifically it is used to prevent blood clots following hip or knee replacement and in those with a history of prior clots. It is used as an alternative to warfarin and does not require monitoring by blood tests. It is taken by mouth.

The thrombin time (TT), also known as the thrombin clotting time (TCT) is a blood test that measures the time it takes for a clot to form in the plasma of a blood sample containing anticoagulant, after an excess of thrombin has been added. It is used to diagnose blood coagulation disorders and to assess the effectiveness of fibrinolytic therapy. This test is repeated with pooled plasma from normal patients. The difference in time between the test and the 'normal' indicates an abnormality in the conversion of fibrinogen to fibrin, an insoluble protein.

Direct thrombin inhibitors (DTIs) are a class of medication that act as anticoagulants by directly inhibiting the enzyme thrombin. Some are in clinical use, while others are undergoing clinical development. Several members of the class are expected to replace heparin and warfarin in various clinical scenarios.

Ecarin clotting time (ECT) is a laboratory test used to monitor anticoagulation during treatment with hirudin, an anticoagulant medication which was originally isolated from leech saliva. Ecarin, the primary reagent in this assay, is derived from the venom of the saw-scaled viper, Echis carinatus.

Anti-thrombin antibodies are autoantibodies directed against thrombin that may constitute a fraction of lupus anticoagulant and are seen an increased levels in systemic lupus erythematosus.

Reptilase time (RT) is a blood test used to detect deficiency or abnormalities in fibrinogen, especially in cases of heparin contamination.

Inogatran (INN) is a low molecular weight peptidomimetic thrombin inhibitor. Inogatran was developed for the potential treatment of arterial and venous thrombotic diseases.

Direct thrombin inhibitors (DTIs) are a class of anticoagulant drugs that can be used to prevent and treat embolisms and blood clots caused by various diseases. They inhibit thrombin, a serine protease which affects the coagulation cascade in many ways. DTIs have undergone rapid development since the 90's. With technological advances in genetic engineering the production of recombinant hirudin was made possible which opened the door to this new group of drugs. Before the use of DTIs the therapy and prophylaxis for anticoagulation had stayed the same for over 50 years with the use of heparin derivatives and warfarin which have some well known disadvantages. DTIs are still under development, but the research focus has shifted towards factor Xa inhibitors, or even dual thrombin and fXa inhibitors that have a broader mechanism of action by both inhibiting factor IIa (thrombin) and Xa. A recent review of patents and literature on thrombin inhibitors has demonstrated that the development of allosteric and multi-mechanism inhibitors might lead the way to a safer anticoagulant.

Anti-thrombin aptamers are G-quadruplex-bearing oligonucleotides, which recognizes the exosites of human thrombin. The first anti-thrombin aptamer, TBA, was generated through via SELEX technology in 1992 by L.C. Bock, J.J. Toole and colleagues. A second thrombin-binding aptamer, HD22, recognizes thrombin exosite II and was discovered in 1997 by NeXstar. These two aptamers have high affinity and good specificity and have been widely studied and used for the development of aptamer-based therapeutics and diagnostics.