Thronar was a Dutch Viking metal/black metal band from the Netherlands. The band released a discography consisting of three demos, one split album, and two albums.

Thronar formed under the name "Cerberus" in 1998 by guitarists Otto van Beusekom and Reamon Bloem, with drummer Joost Westdijk (of Bolthorn). The band got serious when joined by Nathalia Hoogkamer (keyboards) and Marin (vocals). [1] Under the name Cerberus they released two demos, A Journey Must Begin... and One Man's Faith. In 2002, they changed their name to Thronar because there were many bands called Cerberus, and because they started playing a different style, from black metal to Viking metal.

The band have commented on being influenced by the early Norwegian black metal scene; they claim to be atheistic, though they respect certain forms of Satanism. Ideologically, the band hearkens back to old myths and mysticism. [2]

In 2003, Thronar recorded a promo consisting of four tracks, which led to the band getting signed to Seven Kingdoms Records. Shortly afterward, the band made a split with three other bands, Arnhem Trolleymetaal.

In 2005, Thronar's debut album, For Death and Glory, was released through Seven Kingdoms. [3] The album received positive reviews and was reprinted several times. Shortly after in 2006 Reamon decided to fully concentrate on guitar and Koen was brought on for vocal duties.[ citation needed ] In this lineup the band toured with bands such as Eluveitie, Moonsorrow, Ensiferum, Arch Enemy, Korpiklaani, and In Extremo.

Thronar's second album, Unleash the Fire, was released in 2008 on Twilight Records. [4]

In 2009, Thronar's vocalist, Reamon Bloem, left the band and a replacement was sought. However, following this, Thronar declared that they were split up.[ citation needed ]

Thanatos is a Dutch extreme metal band. With a history dating back to 1984, they are the oldest death metal band from the Netherlands. Their second album, Realm of Ecstasy, received positive marks from Dutch music magazine Oor and various international magazines for its solid compositions and challenging arrangements. After enduring constantly changing line-ups and problems with distribution, promotion, and even ownership of the rights to the second album, Thanatos folded in 1992, the final straw being the cancellation of a tour with Cannibal Corpse and Exhorder.

Ildjarn was a Norwegian cult black metal project that formed in 1991. Ildjarn recorded music until 1997 but did not officially end until 2005. The man behind Ildjarn was Vidar Vaaer, although some releases were collaborations with a musician known as Nidhogg.

Slough Feg is an American heavy metal band from Pennsylvania, formed in 1990 and currently based in the San Francisco Bay Area. Taking their name from the Celtic folklore-influenced comic book Sláine, the band released their self-titled debut album in 1996. Slough Feg combines influences from traditional heavy metal bands such as Iron Maiden, Brocas Helm, and Thin Lizzy, as well as English folk metal band Skyclad.

Excel is a crossover thrash band from Venice, California, founded in 1983 by singer Dan Clements and guitarist Adam Siegel. They were influenced by 1970s punk rock musicians like the Germs and Black Flag, and heavy metal bands like Black Sabbath, Trouble, Slayer, Corrosion of Conformity and Cryptic Slaughter. They were also influenced by street art, Excel is known for painting graffiti on the streets of the cities where they make their tours, hence there are many different logos of the band.

Leviathan is an American black metal solo project that started in 1998 by Jef Whitehead under the pseudonym Wrest. On all Leviathan albums, Wrest records and performs vocals on his own. Despite having early problems with the release of Massive Conspiracy Against All Life, it was released March 24, 2008 in Europe and March 25, 2008 in North America. Additionally, Wrest has collaborated with the band Sunn O))), and was an active member of the U.S. black metal supergroup Twilight from its formation until it disbanded in 2014. He has stated in interviews that he has been playing drums longer than any other instrument and that the drums are his instrument of choice. Wrest also played and recorded everything in his other project, Lurker of Chalice, which released two demos and one full length album in 2005 before dissolving that project. Whitehead also writes all the lyrics for Leviathan but has recognized that "I don't consider myself a poet, by any means."

Cirith Gorgor is a Dutch black metal band that formed in 1993.

Nihilist was a Swedish death metal band formed in 1987 by Nicke Andersson and Alex Hellid. The band split-up in 1989 when Johnny Hedlund left to form Unleashed. The remaining members reformed the band under the name Entombed. Nihilist never recorded a full-length album before they renamed as Entombed, but a collection of their demo work was released in 2005. Guitarist Leif "Leffe" Cuzner died in June 2006. 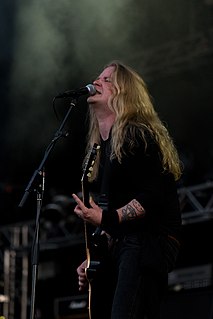 Secrets of the Moon (SotM) are a black metal band from Osnabrück, Germany, founded in 1995. 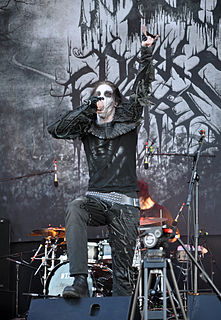 Inhume is a Dutch deathgrind band, formed in 1994. The band has featured a revolving line-up throughout their career, with guitarist Ben Janssen and bassist Loek Peeters being sole constant members.

Heidevolk is a folk metal band from the Netherlands. The lyrical themes of their music are inspired by nature, the history of Gelderland, and the history of Germanic mythology. Most of their lyrics are in Dutch; however, since their album Velua, they also have one original English song, "Vinland", and several English covers.

HDK is a musical project of Dutch guitarist Sander Gommans, best known as member, vocalist and one of the main composers of the now dissolved symphonic metal band After Forever.

Walhalla wacht is the second studio album by the Dutch folk/Viking metal band Heidevolk, released in March 2008. Its North American release coincided with the Napalm Records re-release of their previous full-length album, De strijdlust is geboren.

Uit oude grond is the third studio album by the Dutch folk/viking metal band Heidevolk, which was released on March 26, 2010.

Quintessence is a French black metal band founded in 2005 in Poitiers, France.

Velua is the fifth full-length album by the Dutch pagan / Viking / folk metal band Heidevolk. It was released on March 20, 2015 through Napalm Records.