V-force Customs first build was "V-Force 1", unveiled in Daytona Beach, Florida. [2] Soon after the success of "V-force 1", V-force built a custom chopper for the Tampa Bay Storm Arena League Football team. [3] Vinnie and Cody Connelly announced the build from mid-field at a Storm game at the St. Pete Times Forum in Tampa, FL. The Tampa Bay Storm chopper was unveiled at The Storms' final game of the season on June 21, 2008. The bike is touring the southeast United States with all proceeds going to the Pinellas County Humane Society and The Shriners Hospital for Children in Tampa. Also in June, V-Force Customs had its ribbon cutting and grand opening in Rock Tavern, NY.

William Kenefick is an award-winning motorcycle designer. RetroSBK designs and builds custom and retro-inspired motorcycles. RetroSBK-designed motorcycles are featured in the movie Transformers: Revenge of the Fallen as the three components of Arcee. He is joined with bike builder Jeff Lindaman for the series. 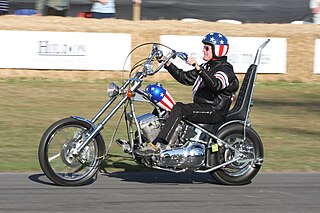 A chopper is a type of custom motorcycle which emerged in California in the late 1950s. The chopper is perhaps the most extreme of all custom styles, often using radically modified steering angles and lengthened forks for a stretched-out appearance. They can be built from an original motorcycle which is modified ("chopped") or built from scratch. Some of the characteristic features of choppers are long front ends with extended forks often coupled with an increased rake angle, hardtail frames, very tall "ape hanger" or very short "drag" handlebars, lengthened or stretched frames, and larger than stock front wheels. The "sissy bar", a set of tubes that connect the rear fender with the frame, and which are often extended several feet high, is a signature feature on many choppers.

American Chopper is an American reality television series that is still on air on Discovery Channel from 2003, produced by Pilgrim Films & Television. The series centers on Paul Teutul Sr., and his son Paul Teutul Jr., who manufacture custom chopper-style motorcycles. Orange County Choppers is in Newburgh, New York. The contrasting work and creative styles of the father-and-son team and their resulting verbal arguments were the series' hallmark until 2008 when an explosive argument led to Paul Jr.'s termination and departure to start a competing chopper company, Paul Jr. Designs.

A custom motorcycle is a motorcycle with stylistic and/or structural changes to the 'standard' mass-produced machine offered by major manufacturers. Custom motorcycles might be unique, or built in limited quantities. While individual motorcyclists have altered the appearance of their machines since the very first days of motorcycling, the first individualized motorcycles specifically labeled 'Custom' appeared in the late 1950s, around the same time as the term was applied to custom cars. In the 1960s, custom artisans like Arlen Ness and Ben Hardy created new styles of custom bikes, the chopper. In the 1990s and early 2000s, very expensive customs such as those built by Orange County Choppers, Jesse James's West Coast Choppers, Roger Goldammer became fashionable status symbols. There are also companies that are bringing back pin striping, such as Kenny Howard and Dean Jeffries from the 1950s, with a continued effort to keep pin striping alive. The choppers of the 1960s and 1970s fit into this category.

Paul Michael Teutul is one of the stars of the American reality television series American Chopper. He started working for his father. Teutul was the chief designer and fabricator. Prior to this, Teutul was head of the rail shop at Orange County Ironworks. He is the owner of Paul Jr. Designs, which manufactures custom motorcycles and sells branded clothing. Teutul, along with his father and younger brother Michael Teutul, became celebrities when they became the focus of a reality television series American Chopper on Discovery Channel in 2002. 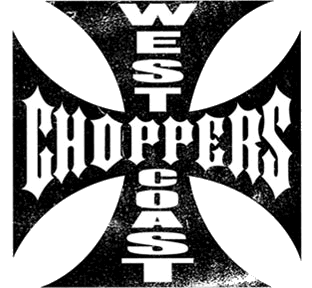 West Coast Choppers (WCC) is a brand that began selling screen-printed T-shirts and stickers with the company's Iron cross/Maltese cross logo while founder and "master marketer" Jesse James was finishing high school, packaging the accoutrements of the chopper lifestyle long before any actual West Coast Choppers customs had been ordered or sold. Even after the company did begin building custom choppers, 60% of revenue still came from sales of WCC-branded marketing tie-ins such as clothing, beverages and tools. Yearly sales of approximately 12–15 motorcycles at prices of around US$150,000 each actually lost money for the company, but attracted positive attention. Publicizing the names of celebrity clients, including Shaquille O'Neal, Kid Rock, Keanu Reeves, Ty Law of the Denver Broncos, wrestling star Bill Goldberg, actor Tyson Beckford, and NFL running back Jamal Anderson, was a central feature of the WCC marketing strategy. The other key to this strategy was the star power of Jesse James, presented mainly through television on the Discovery Channel in the Motorcycle Mania series and the 2002–2006 series Monster Garage.

William David Lane is an American builder of custom motorcycles, owner of Choppers Inc. in Melbourne, Florida, known for his 2009 conviction and imprisonment in Florida for a drunk-driving incident in 2006, where Lane's driving caused the death of another biker/moped 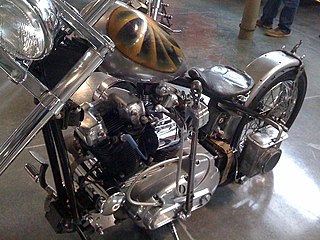 The terms suicide clutch, and suicide shifter or jockey shifter, refer to a motorcycle's foot-operated clutch and hand-shifter to change gears, Foot clutches and hand shifters were found on early motorcycle designs from around the turn of the 20th Century to the 1940s or 50s, and reappearing on modern retro styled custom motorcycles and choppers. Modern motorcycles do not require removing a hand from the handlebars to shift gears, using only the fingers for the clutch and the toes of one foot to select gears. In contrast, the fanciful slang "suicide" was applied to designs where the rider removes one hand to change gears, or cannot put both feet on the ground while using a foot clutch to disengage the transmission. Sometimes the shifter is referred to as a "jockey shifter" while the foot clutch is called a "suicide clutch".

Arlen Darryl Ness was an American motorcycle designer and entrepreneur best known for his custom motorcycles. Ness received acclaim for his designs, most of which are noted for their unique body style and paintwork.

Orange County Choppers bikes are motorcycles featured on the television series American Chopper built by Orange County Choppers (OCC) for a specific corporate or celebrity customer. Theme bikes are motorcycles in which the theme of the motorcycle takes priority over everything else, influencing the frame dimensions, paint scheme, and overall 'feel' of the motorcycle. The function of motorcycle usually takes a backseat to the presentation of the theme, and these motorcycles attract attention solely on the premise of the theme itself. Customer bikes are built for and generally to the specifications of a particular customer. Although the customers typically give OCC creative freedom to do what they will, some clients have a specific idea in mind and expect OCC to reproduce their mental picture literally.

A bobber, originally called a 'bob-job' from the 1930s through 1990s, is a style of custom motorcycle. The typical construction includes stripping excess bodywork from a motorcycle; removing the front fender, and shortening the rear fender, which is "bobbed", and all superfluous parts removed to reduce weight. 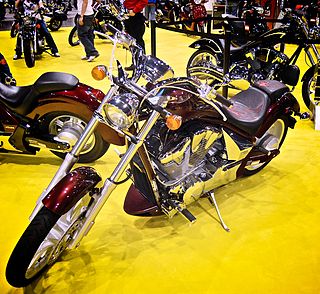 The Honda Fury was the first production chopper from a major motorcycle manufacturer Honda. In a break with tradition, the Fury was the first chopper to have an anti-lock braking system The Fury's styling has been likened to custom-made choppers from Paul Teutul Sr. or Arlen Ness. The Fury has been sold not only in North America, but internationally as well, although in some markets Honda eschewed the Fury name and offered the bike simply by its model ID: VT1300CX.

William Kenefick is an American television personality and CEO of Prophecy Cycles in Camarillo, CA a manufacturer of Direct to consumer Mountain Bikes.. . William was featured on Throttle Junkies TV and is an award-winning motorcycle designer with dozens of Motorcycle Magazine features and covers world wide.

Back Street Heroes is a monthly UK custom bike magazine that helped to popularize a "new breed" of custom motorcycle, distinct from previous choppers because they combined rat bike-influenced utilitarian and minimalist design with greater use of high tech gadgetry, but catering to an upscale buyer in the Robb Report demographic. 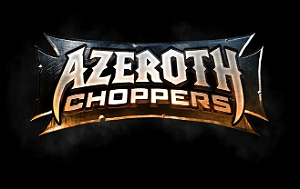 Azeroth Choppers was a weekly web series by Blizzard Entertainment that ran from April 17 to June 5, 2014. It featured Paul Teutul, Jr. and his company Paul Jr. Designs building motorcycles based on Blizzard's long-running MMORPG World of Warcraft.

Biker Battleground Phoenix is a scripted reality television series developed for the History Channel. Narrated by Greg Berger, the series pits five rival bike-builders from Phoenix, Arizona, against each other to see who can design and build the best bike to put an end to their rivalry and smack talking. The first episode aired on Thursday, July 1, 2014, at 10:00 pm.