Thu Van Tran (born in Ho Chi Minh City, Vietnam, 1979) is an artist. She lives and works in Paris, France.

Tran's work has been characterised by literature, architecture and history. Her birth country, Vietnam and her homeland France bring her to think and work with duality, inequality and instability as structural elements of her practice. Her work takes form of semantic or sculptural compositions that are placed in contemplative and discursive fields. [1] 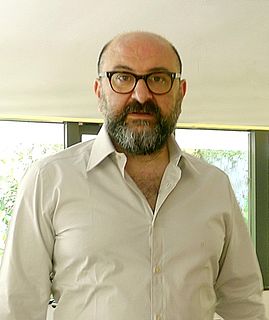 Pierre Bismuth is a French artist and filmmaker based in Brussels. His practice can be placed in the tradition of conceptual art and appropriation art. His work uses a variety of media and materials, including painting, sculpture, collage, video, architecture, performance, music, and film. He is best known for being among the authors of the story for Eternal Sunshine of the Spotless Mind (2004), for which he won an Academy Award for Best Original Screenplay in 2005 alongside Michel Gondry and Charlie Kaufman. Bismuth made his directorial debut with the 2016 feature film Where is Rocky II?.

Georges Adéagbo is a Beninese sculptor known for his work with found objects.

Jürgen Partenheimer is a German artist. Since coming to prominence through his participation in the Paris Biennial in 1980 and the Venice Biennial in 1986, his work has been shown internationally. His practice includes painting, drawing and sculpture, and draws on theory, poetry and prose. His art has been referred to as metaphysical realism.

Allan Sekula was an American photographer, writer, filmmaker, theorist and critic. From 1985 until his death in 2013, he taught at California Institute of the Arts. His work frequently focused on large economic systems, or "the imaginary and material geographies of the advanced capitalist world."

Jennifer K Dick, is an American poet, translator and educator/scholar born in Minnesota, raised in Iowa and currently living in Mulhouse, France. She has been classified as a post-L=A=N=G=U=A=G=E school poet and, by Amy Catanzano, as a U+F+O+L+A+N+G+U+A+G+E poet with a strong background in lyric and narrative tradition.

Simon Njami is a writer and an independent curator, lecturer, art critic and essayist.

Caro Niederer is a contemporary artist who lives and works in Zürich.

Melik Ohanian is a French contemporary artist of Armenian origin. He lives and works in Paris and New York City. His work has been shown in many solo exhibitions including Galerie Chantal Crousel, Centre Pompidou and Palais de Tokyo in Paris, South London Gallery in London, De Appel in Amsterdam, IAC in Villeurbanne, Yvon Lambert in New York, Museum in Progress in Vienna, and Matucana 100 in Santiago de Chile...

Michel François is a Belgian artist. He lives and works in Brussels, Belgium.

Benoît Maire is a French visual artist who works in film, sculpture, painting, photography, collage, and performance art. He is known for treating theory as an art form in its own right.

John Miller is an artist, writer, and musician based in New York and Berlin. He received a B.F.A. from the Rhode Island School of Design in 1977. He attended the Whitney Museum of American Art Independent Study Program in 1978 and received an M.F.A. from California Institute of the Arts in 1979. Miller worked as a gallery attendant at Dia:Chelsea. He is currently Professor of Professional Practice in Art History at Barnard College

Lili Dujourie is a Flemish visual artist who works primarily in sculptures, paintings, and video. She has held numerous solo and group exhibitions since 1968 and continues to make art today.

Adam Henry is an American artist. He lives and works in Brooklyn, NY.

The Brussels Gallery Weekend is an event dedicated to contemporary visual art in Brussels. This weekend usually occurs in September and is divided in two main tours. One throughout the main art galleries of the city and one, curated by an independent curator, in the main artistic institutions.

Sarah Bostwick is an American artist, known for her architecture or landscape inspired, minimal, cast and carved drawings.

Maarten Vanden Eynde is a Belgian artist. He lives and works in Brussels (Belgium) and Saint-Mihiel (France).

Anne Imhof is a German visual artist, choreographer, and performance artist who lives and works between Frankfurt and Paris. She is best known for her endurance art, although she cites painting as central to her practice.

Guillaume Leblon is a French sculptor and visual artist. He lives and works in New York City.