Thulir is an Indian monthly children's science magazine published in Tamil by the Tamil Nadu Science Forum without a break since 1987. [1] [2] Its purpose is to bring science to school children, especially in rural areas. [2] The headquarters of the monthly is in Chennai. [2] Thulir is sustained by the support of children and teachers. 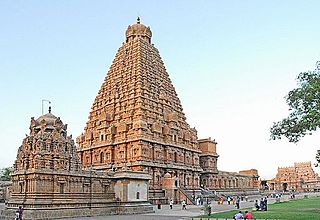 Tamil Nadu, is one of the 28 states of India. Its capital and largest city is Chennai. Tamil Nadu lies in the southernmost part of the Indian subcontinent and is bordered by the union territory of Puducherry and the South Indian states of Kerala, Karnataka, and Andhra Pradesh. It is bounded by the Eastern Ghats on the north, by the Nilgiri Mountains, the Meghamalai Hills, and Kerala on the west, by the Bay of Bengal in the east, by the Gulf of Mannar and the Palk Strait on the southeast, and by the Indian Ocean on the south. The state shares a maritime border with the nation of Sri Lanka.

Chennai, also known as Madras, is the capital of the Indian state of Tamil Nadu. Located on the Coromandel Coast off the Bay of Bengal, it is a primary cultural, economic and educational centre of south India. According to the 2011 Indian census, it is the sixth-most populous city and fourth-most populous urban agglomeration in India. The city together with the adjoining regions constitutes the Chennai Metropolitan Area, which is the 36th-largest urban area by population in the world. Chennai is among the most-visited Indian cities by foreign tourists. It was ranked the 43rd-most visited city in the world for the year 2015. The Quality of Living Survey rated Chennai as the safest city in India. Chennai attracts 45 percent of health tourists visiting India, and 30 to 40 percent of domestic health tourists. As such, it is termed "India's health capital".

Anna University is a public state university located in Tamil Nadu, India. The main campus is in Guindy, Chennai and the satellite campus is in Chromepet, Chennai. It was established on 4 September 1978. It is ranked as the tenth institution in India overall by the National Institutional Ranking Framework, ranked fourth among universities, and ranked eighth in engineering. The main campus houses the College of Engineering, Guindy; Alagappa College of Technology, School of Architecture and Planning, and three technical departments of the University of Madras. The Madras Institute of Technology campus is located in Chromepet.

C. Joseph Vijay is an Indian film actor and playback singer who works in Tamil cinema. Referred to by fans and media as Thalapathy (commander), Vijay is the highest paid actor in the industry and one of the most recognizable figures in South India. By 2017, he became the second-highest grossing actor in Tamil cinema history, behind veteran Rajinikanth. As of 2019, Vijay has acted in 64 films as a lead actor and won numerous awards, including eight Vijay Awards, three Tamil Nadu State Film Awards, three Edison Awards, two Vikatan Awards and an Indiatoday Award, SIIMA Award, and National Film Award UK. He received an honorary doctorate from the Dr. M.G.R. Educational and Research Institute of the Tamil Nadu Dr. M.G.R. Medical University in 2007 for his contributions to social welfare and in honour of his achievements in the film industry. He has been included seven times in the Forbes India Celebrity 100 list, based on the earnings of Indian celebrities: 2012, 2013, 2014, 2016, 2017, 2018 and 2019.

The Madras Medical College is an educational institution located in Chennai, Tamil Nadu, India. It was established on 2 February 1835. It is the third oldest medical college in India, established after Ecole de Médicine de Pondichéry and Medical College Kolkata and is one of the foremost centres of post-graduate medical education in the country with 425 seats. 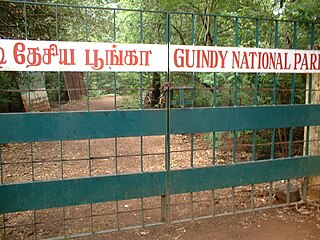 Guindy National Park is a 2.70 km2 (1.04 sq mi) protected area of Tamil Nadu, located in Chennai, India, is the 8th-smallest National Park of India and one of the very few national parks situated inside a city. The park is an extension of the grounds surrounding Raj Bhavan, formerly known as the 'Guindy Lodge', the official residence of the Governor of Tamil Nadu, India. It extends deep inside the governor's estate, enclosing beautiful forests, scrub lands, lakes and streams. 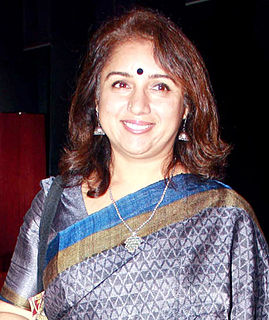 Asha Kelunni Nair, better known by her stage name Revathi, is an Indian film actress and director, known for her works predominantly in Tamil and Malayalam cinema. She has won several accolades, including the National Film Awards in three different categories, and six Filmfare Awards South.

Kalanithi Maran is an Indian media baron who is the chairman and founder of the Sun Group. He owns television channels, newspapers, weeklies, FM Radio stations, DTH services and a movie production house. He also held a major share in the Indian airline Spice Jet from 2010 to 2015.

Chennai is home to many educational and research institutions. IIT Madras is ranked among the top centres of engineering education in India. College of Engineering, Guindy is the only state owned college to be ranked in the top 10 engineering colleges in India, along with the IITs and NITs. Madras Institute of Technology is another institutions for engineering studies, which is also part of Anna University along with College of Engineering, Guindy. it also have one of Top MBA institute in India Xavier Institute of Management and Entrepreneurship, Chennai. Medical colleges such as the Madras Medical College and Stanley Medical College are located in the city. The arts and science colleges in the city include Loyola College, Stella Maris College, Women's Christian College, DG Vaishnav College, Madras Christian College and Presidency College. Some of the schools in Chennai are recognized among the top schools in the nation.

Puranam Vasundhara devi, known by her stage name Kanchana is a noted Indian actress of the 1960s, 1970s and 1980s. She acted in all four major south Indian languages: Telugu, Tamil, Kannada, and Malayalam, as well as in a few Hindi films.

A R Venkatachalapathy is a historian, author and translator from Tamil Nadu, India who writes and publishes in Tamil and English. Currently he is a professor at the Madras Institute of Development Studies (MIDS). He is noted for collecting and publishing the works of Tamil writer Pudhumaipithan. 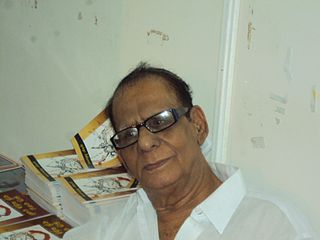 The Anna Centenary Library (ACL) is an established state library of the Government of Tamil Nadu. It is located at Kotturpuram, Chennai. It is built at a cost of ₹172 crores. It is named after a former chief minister of Tamil Nadu, C. N. Annadurai. It was opened by the then Chief Minister of Tamil Nadu M. Karunanidhi. The average number of persons who visited the library between January and October 2011 is around 26,500, compared to the monthly average of 20,000 in 2010. 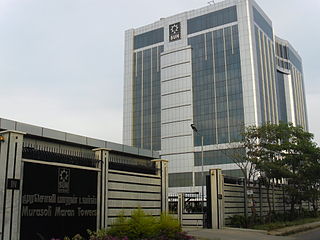 SUN Group is an Indian media conglomerate company based in Chennai, Tamil Nadu, India. It was founded by Kalanithi Maran in 1992.

Healthcare in Chennai is provided by both government-run and private hospitals. Chennai attracts about 45 percent of health tourists from abroad arriving in the country and 30 to 40 percent of domestic health tourists. The city has been termed India's health capital. Multi- and super-specialty hospitals across the city bring in an estimated 150 international patients every day. Factors behind the tourists' inflow in the city include low costs, little to no waiting period, and facilities offered at the speciality hospitals in the city.

Pondicherry Science Forum (PSF) was founded in 1985. PSF believes that science placed before humanity tools which transform society, tools that banish poverty, disease and social backwardness. But for it to be used for such purposes, awareness of potential of science and technology, and a scientific temperament should become an integral part of the life process of the people. It describes itself as "a non profit, voluntary, public-interest organization" which is based in Puducherry, India. It works primarily on issues related to science policy and science popularization.