Thumaita is rural village on the southern slope of Mount Kenya located in the Kirinyaga District, Central Province, of Kenya.

Mount Kenya is the highest mountain in Kenya and the second-highest in Africa, after Kilimanjaro. The highest peaks of the mountain are Batian, Nelion and Point Lenana. Mount Kenya is located in the former Eastern and central provinces of Kenya, now Meru, Embu, Laikipia, Kirinyaga, Nyeri and Isiolo counties, about 16.5 kilometres (10.3 mi) south of the equator, around 150 kilometres (93 mi) north-northeast of the capital Nairobi. Mount Kenya is the source of the name of the Republic of Kenya.

Embu is a town located approximately 120 kilometres (75 mi) northeast of Nairobi towards Mount Kenya. Embu served as the provincial headquarters of the Eastern Province in Kenya and is also the county headquarters of Embu County. Located on the south-eastern slopes of Mount Kenya, the town of Embu had a population of 41,092 in 1999.

Nyahururu is a town in Kenya, lying north east of Nakuru. The town derives its name from the Maasai word e-naiwurruwurr, meaning meaning waterfall and/or windy or place of storms. It is located in Laikipia County. Despite this, Nyahururu formerly functioned as the administrative capital of Nyandarua County, before it became a county, until the headquarters was shifted to Ol Kalou. There have been calls for a reversal. The town has an urban population of 36,450. The town still remains to be a central economic power of the immediate former district of Nyandarua. For that reason, the town has strong economic ties to the two counties.

Kericho is the biggest town in Kericho County located in the highlands west of the Kenyan Rift Valley. Standing on the edge of the Mau Forest, Kericho has a warm and temperate climate making it an ideal location for agriculture and in particular, the large scale cultivation of tea.

Homa Bay is a bay and town on the south shore of Winam Gulf of Lake Victoria, in western Kenya. It lies near Mount Homa and Ruma National Park, the latter noted for Jackson's hartebeests and roan antelope.

Mukurweini was a former district in Nyeri County, Kenya.

Nanyuki Airfield is an airport in Nanyuki, Kenya. 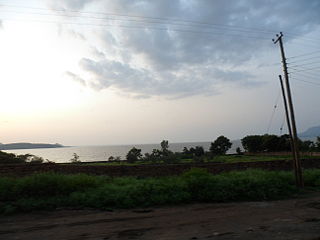 Kendu Bay is a bay and town in Kenya. The area is the part of Rachuonyo North District in Homa Bay County. It is located on the shore of Lake Victoria along Katito-Homa-Bay road. It is the headquarters of the district. Kisumu, the largest urban centre in Kenya's western region, is located 40 kilometres north of Kendu Bay, but the route to Kisumu, which goes via Ahero, is much longer as it circumvents Winam Gulf in between kisumu- Ahero- Katito- Kendu Bay is 70 km from Kisumu town. Kendu Bay is also linked by a road to Homa Bay, located 30 kilometres southwest.

Nondescripts Rugby Football Club is a Kenyan rugby club based in Nairobi. The club is the oldest in Kenya, and was founded in 1923 after the splitting of the Nairobi rugby club. The club 1st XV compete in the Kenya Cup, while the 2nd XV compete in the Eric Shirley Shield. At the end of the now defunct Nairobi District Championship, they had the most wins with 19.

Jamhuri High School, formerly known as Government Indian School and later The Duke of Gloucester School, is one of the oldest schools in Kenya. It was founded as a Railway Educational Centre in 1906. Prior to Kenya's independence from the British, the school, located at Ngara Nairobi, predominantly enrolled students from the Indian community in Nairobi, hence its former name Government Indian School.

Haamse is a village in Saaremaa Parish, Saare County in western Estonia.

Narsanda is a small village in the Kheda district of Gujarat, India. The region belongs to a green belt of charotar region in Gujarat state of India. Narsanda is a village which is near to Anand and Nadiad. People from different religions such as Hinduism, Islam and Christianity live peacefully in this village. It has many temples such as Shiva temple near the beautiful lake, Swaminarayan temple, temple of Krishna, Bhathiji, Santaram Maharaj etc. There is a mosque as well for Muslims. Most of the people in village are farmers but with globalization many of the natives have migrated to different parts of India as well as in USA, England, Australia, Kenya etc. Right now there are about 250 families living in USA from this village.

The First Lady of Kenya is the title held by the wife of the President of Kenya. The country's present First Lady is Margaret Kenyatta, wife of President Uhuru Kenyatta, who took office on 9 April 2013.

Nicholas Wachira is a retired Kenyan middles-distance runner who competed mostly in the 800 metres. He represented his country at the 2001 and 2003 World Championships reaching semifinals at both occasions. In addition, he won gold medals at the 1999 World Youth and 2000 World Junior Championships.

Haron Shakava is a Kenyan professional footballer who plays for Gor Mahia in the Kenyan Premier League and the Kenya national team as a defender.

Simon Wachira is a Kenyan race walker. He competed in the men's 20 kilometres walk at the 2016 Summer Olympics.

Isaac Lenaola is a Kenyan lawyer and judge, who has served as a Justice of the Supreme Court of Kenya, since 28 October 2016.