The Thumb Octagon Barn is an historic and unique barn located outside Gagetown, Michigan.

It was built in 1924 [1] by local businessman James Purdy who hired local builders George and John Munro to construct the barn. Purdy was inspired to build the unique barn when he saw similar barns in Iowa. Purdy sold his farm in 1942. It went through several owners until the last private owner lost it in foreclosure proceedings in 1990. [2]

The Michigan Department of Natural Resources bought the property from the bank in 1991 to be incorporated into the adjacent Gagetown State Game Area. The farm buildings including the octagon barn had fallen into disrepair and was in danger of demolition. Local citizens banded together and organized the first Octagon Barn Festival in 1994 to raise funds to repair the barn. The Friends of the Thumb Octagon Barn was formed that year.

After the barn, historic farmhouse, garage and electric power plant were restored, other buildings were moved or built on the old Purdy farm. Moved to the site were a one-room schoolhouse and grain elevator. New construction included a schoolhouse museum, a large multipurpose building, a covered bridge and a sawmill. A blacksmith shop is planned.

The Thumb Octagon Barn Agricultural Museum is open from May to October and the arts and crafts style Purdy farmhouse is open on selected days during the Christmas season.

Prestwood is a village in Buckinghamshire, England. It is located in the Chiltern Hills, about two miles west of Great Missenden and six miles north of High Wycombe. 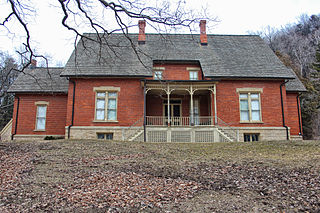 Stonefield, located at 12195 County Road VV outside Cassville, Wisconsin, United States, was the 2,000-acre (800-hectare) estate of Wisconsin's first governor, Nelson Dewey. Much of the original estate has been separated into Nelson Dewey State Park and the Stonefield historic site, an expansive museum operated by the Wisconsin Historical Society. The historic site takes advantage of the large property by offering several different areas for visitors, including an early Wisconsin farmhouse, a re-created agricultural village built to resemble those common around 1900, and a reconstruction of Nelson Dewey's home. Stonefield is also home to the Wisconsin State Agricultural Museum, which features a large collection of antique farm equipment.

A round barn is a historic barn design that could be octagonal, polygonal, or circular in plan. Though round barns were not as popular as some other barn designs, their unique shape makes them noticeable. The years from 1880 to 1920 represent the height of round barn construction. Round barn construction in the United States can be divided into two overlapping eras. The first, the octagonal era, spanned from 1850 to 1900. The second, the true circular era, spanned from 1889 to 1936. The overlap meant that round barns of both types, polygonal and circular, were built during the latter part of the nineteenth century. Numerous round barns in the United States are listed on the National Register of Historic Places. 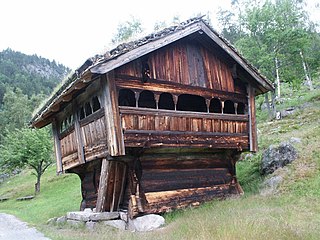 Rygnestadtunet is an open-air museum at Nordigard farm in northern Rygnestad in the municipality of Valle in Agder county, Norway. It is located in the Setesdal region of Norway, near the junction of the Norwegian National Road 9 and Norwegian County Road 45, about 9 kilometres (5.6 mi) north of the village of Valle. The farm museum today looks exactly as it did when it was deserted in 1919. The farm was legally protected in 1923, it was purchased by the Setesdal Museum in 1938, and it was opened to the public as a museum in 1940. Excavations in the area indicate that the site has been populated since at least 900 AD.

Muscoot Farm is an early 20th-century interpretative farm museum in Katonah, New York in the United States. The farm is owned and operated by the Westchester County Department of Parks, Recreation and Conservation. 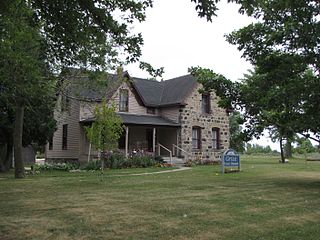 The Grice House is located at 865 North Huron Avenue in Harbor Beach, Michigan. It is a museum showing life in years gone by.

Port Oneida Rural Historic District is part of the Sleeping Bear Dunes National Lakeshore. It consists of a set of farms in the Leelanau Peninsula of Northern Michigan that are typical of Northern European settlers throughout the Midwestern United States in the later part of the 19th century. 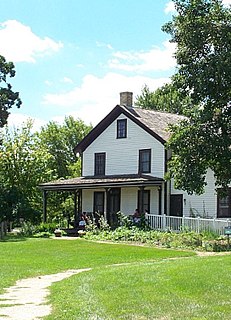 The Gibbs Farm is a museum in Falcon Heights, Minnesota, United States. The site was once the farmstead of Heman Gibbs and Jane DeBow, first built in 1854; the existing farmhouse includes the small, original cabin. The museum seeks to educate visitors on the lives of 19th-century Minnesota pioneers and the Dakota people who lived in southern Minnesota before the arrival of Europeans.

Heritage Village Museum is a recreated 1800s community in Southwestern Ohio, in the United States. The village contains 13 historic buildings from around the Cincinnati area; they were moved here to save them from destruction. The village is located within Sharon Woods Park in Sharonville, Ohio.

The Hanka Homestead now known as the Hanka Homestead Finnish Museum is a group of 8 buildings on a 40-acre (160,000 m2) homestead. It is located 3 miles (4.8 km) west of U.S. Highway 41, off Tower Road, near Pelkie, Michigan in the United States. The homestead was added to the National Register of Historic Places in 1984. 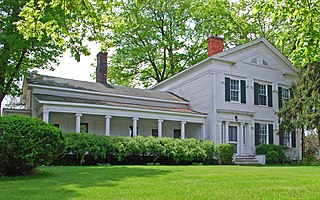 Greenmead Historical Park, also known as Greenmead Farms, is a 3.2-acre (1.3 ha) historic park located at 38125 Base Line Rd., Livonia, Michigan. It includes the 1841 Greek Revival Simmons House, six other structures contributing to the historic nature of the property, and additional buildings moved from other locations. Greenmead Farms was designated a Michigan State Historic Site in 1971 and listed on the National Register of Historic Places in 1972.

A gin gang, wheelhouse, roundhouse or horse-engine house, is a structure built to enclose a horse engine, usually circular but sometimes square or octagonal, attached to a threshing barn. Most were built in England in the late 18th and early 19th centuries. The threshing barn held a small threshing machine which was connected to the gin gang via wooden gears, drive shafts and drive belt, and was powered by a horse which walked round and round inside the gin gang. 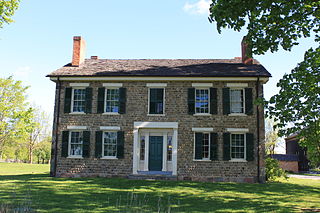 The Cobblestone Farm and Museum, which includes the Dr. Benajah Ticknor House is an historical museum located at 2781 Packard Road in Ann Arbor Michigan. The museum gets its name from the cobblestone used to build the farmhouse. It was listed on the National Register of Historic Places in 1972 and designated a Michigan State Historic Site in 1973.

Rentschler Farm Museum is a historic site located at 1265 East Michigan Avenue near downtown Saline, Michigan. The site consists of an old-fashioned farmhouse and eleven outbuildings, including a hog house, an equipment shed, a hen house, and a windmill, among others. The site is now a museum that serves as a tourist attraction, showing how farming has changed over the years. The site was listed on the National Register of Historic Places in 2013. 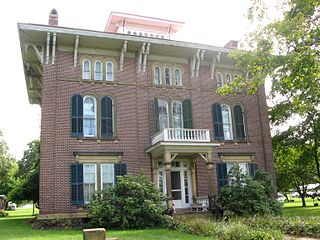 Henderson Hall Historic District is a National Register of Historic Places (NRHP)-listed historic district in Boaz, Wood County, West Virginia. The primary contributing property is Henderson Hall, a home in the Italianate style from the first half of the 19th century. Other residences at the site are a tenant house from the end of the 19th century, and "Woodhaven", the 1877 home of Henry Clay Henderson. Additional structures include a smokehouse, two corn cribs, a carriage barn that also served as a schoolhouse, a scale house used for storing agricultural equipment, and two barns. Also included within the district are the 19th-century Henderson family cemetery, a wall, a mounting block, and three mounds associated with the pre-Columbian Adena culture.

The Lawrence Farm is a historic farm at 9 Lawrence Road in Troy, New Hampshire. Established in the early 19th century, the property has been in continuous ownership by the same family since then. Its farmstead, including a c. 1806 farmhouse, exemplifies the changing trends in domestic agricultural practices of the 19th and 20th centuries. The farm was listed on the National Register of Historic Places in 2000. 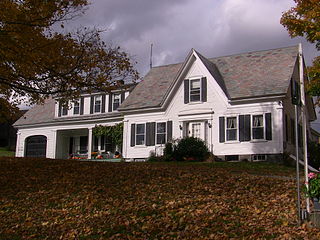 Top Acres Farm, known historically as the Fletcher–Fullerton Farm, is a farm property at 1390 Fletcher Schoolhouse Road in Woodstock, Vermont. Developed as a farm in the early 19th century, it was in continuous agricultural use by just two families for nearly two centuries. It was listed on the National Register of Historic Places in 2004.