A thumbprint is a form of fingerprint.

Thumbprint may also refer to:

In radiology, the thumbprint sign, or thumbprinting, is a radiologic sign found on a lateral C-spine radiograph that suggests the diagnosis of epiglottitis. The sign is caused by a thickened free edge of the epiglottis, which causes it to appear more radiopaque than normal, resembling the distal thumb.

Friedrich Glauser was a German-language Swiss writer. He was a morphine and opium addict for most of his life. In his first novel Gourrama, written between 1928 and 1930, he treated his own experiences at the French Foreign Legion. The evening before his wedding day, he suffered a stroke caused by cerebral infarction, and died two days later. Friedrich Glauser's literary estate is archived in the Swiss Literary Archives in Bern.

Carbon dioxide (chemical formula CO2) is a colorless gas with a density about 60% higher than that of dry air. Carbon dioxide consists of a carbon atom covalently double bonded to two oxygen atoms. It occurs naturally in Earth's atmosphere as a trace gas. The current concentration is about 0.04% (410 ppm) by volume, having risen from pre-industrial levels of 280 ppm. Natural sources include volcanoes, hot springs and geysers, and it is freed from carbonate rocks by dissolution in water and acids. Because carbon dioxide is soluble in water, it occurs naturally in groundwater, rivers and lakes, ice caps, glaciers and seawater. It is present in deposits of petroleum and natural gas. Carbon dioxide is odorless at normally encountered concentrations. However, at high concentrations, it has a sharp and acidic odor. 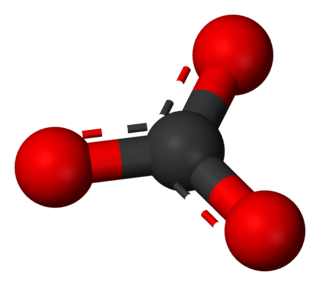 In chemistry, a carbonate is a salt of carbonic acid (H2CO3), characterized by the presence of the carbonate ion, a polyatomic ion with the formula of CO2−
3. The name may also refer to a carbonate ester, an organic compound containing the carbonate group C(=O)(O–)2.

Monosaccharides, also called simple sugars, are the simplest form of sugar and the most basic units of carbohydrates. They cannot be further hydrolyzed to simpler chemical compounds. The general formula is C
nH
2nO
n. They are usually colorless, water-soluble, and crystalline solids. Some monosaccharides have a sweet taste. 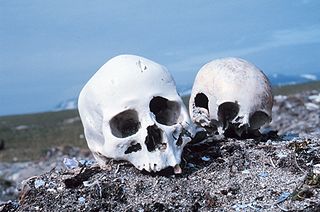 Forensic science is the application of science to criminal and civil laws, mainly—on the criminal side—during criminal investigation, as governed by the legal standards of admissible evidence and criminal procedure. 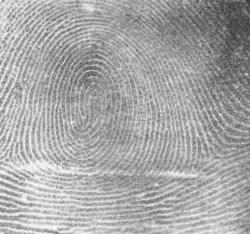 A fingerprint in its narrow sense is an impression left by the friction ridges of a human finger. The recovery of fingerprints from a crime scene is an important method of forensic science. Fingerprints are easily deposited on suitable surfaces by the natural secretions of sweat from the eccrine glands that are present in epidermal ridges. These are sometimes referred to as "Chanced Impressions".

Carbonation refers to reactions of carbon dioxide to give carbonates, bicarbonates, and carbonic acid. In chemistry, the term is sometimes used in place of carboxylation, which refers to the formation of carboxylic acids.

Ninhydrin (2,2-dihydroxyindane-1,3-dione) is a chemical used to detect ammonia or primary and secondary amines. When reacting with these free amines, a deep blue or purple color known as Ruhemann's purple is produced. Ninhydrin is most commonly used to detect fingerprints, as the terminal amines of lysine residues in peptides and proteins sloughed off in fingerprints react with ninhydrin. It is a white solid which is soluble in ethanol and acetone at room temperature. Ninhydrin can be considered as the hydrate of indane-1,2,3-trione.

Chicago XIV is the twelfth studio album by the American band Chicago, released in 1980. Recorded at a time of waning interest in the band, Chicago XIV remains one of Chicago's poorest selling albums, failing to reach Gold certification by the Recording Industry Association of America (RIAA) and was deemed a commercial flop. It is also notable for being their last studio album with Columbia Records, and the last one to feature percussionist Laudir de Oliveira.

"The Adventure of the Norwood Builder", one of the 56 short Sherlock Holmes stories written by Sir Arthur Conan Doyle, is the second tale from The Return of Sherlock Holmes. The story was first published in The Strand Magazine in 1903 with original illustrations by Sidney Paget.

The Orbiting Carbon Observatory (OCO) is a NASA satellite mission intended to provide global space-based observations of atmospheric carbon dioxide. The original spacecraft was lost in a launch failure on 24 February 2009, when the payload fairing of the Taurus rocket which was carrying it failed to separate during ascent. The added mass of the fairing prevented the satellite from reaching orbit. It subsequently re-entered the atmosphere and crashed into the Indian Ocean near Antarctica. The replacement satellite, Orbiting Carbon Observatory 2, was launched 2 July 2014 aboard a Delta II rocket. The Orbiting Carbon Observatory 3, a stand-alone payload built from the spare OCO-2 flight instrument, will be installed on the International Space Station's Kibō Exposed Facility in April 2017. 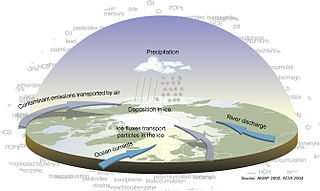 Arctic haze is the phenomenon of a visible reddish-brown springtime haze in the atmosphere at high latitudes in the Arctic due to anthropogenic air pollution. A major distinguishing factor of Arctic haze is the ability of its chemical ingredients to persist in the atmosphere for an extended period of time compared to other pollutants. Due to limited amounts of snow, rain, or turbulent air to displace pollutants from the polar air mass in spring, Arctic haze can linger for more than a month in the northern atmosphere.

1,3-Indandione (indanedione) is an organic compound with the molecular formula C9H6O2. Chemically, it is a β-diketone. In standard conditions it is referred to in different sources as either a colorless or yellowish, green, or (most commonly) yellow solid.

The Public Prosecution Service v William Elliott and Robert McKee [2013] UKSC 32 is a case decided by the Supreme Court of the United Kingdom concerning admissibility of electronic evidence obtained from an electronic fingerprint reader unit that had not been approved by the Secretary of State as required by Article 61(8)(b) of the Police and Criminal Evidence Order 1989.