In radiology, the thumbprint sign, or thumbprinting, is a radiologic sign found on a radiograph that suggests the diagnosis of either epiglottitis or intestinal ischemia.

In a lateral C-spine radiograph, the sign is caused by a thickened free edge of the epiglottis, which causes it to appear more radiopaque than normal, resembling the distal thumb.

In an abdominal radiography, thumbprinting has an appearance of thumbs protruding into the intestinal lumen, and is caused by thickened edematous mucosal folds. [1] Abdominal thumbprinting is a non-specific finding, though one potential cause is intestinal ischemia. [2] 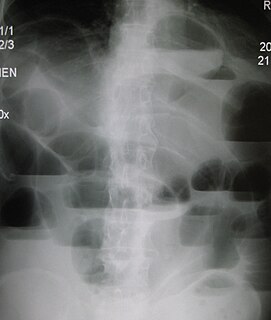 An upper gastrointestinal series, also called a barium meal, is a series of radiographs used to examine the gastrointestinal tract for abnormalities. A contrast medium, usually a radiocontrast agent such as barium sulfate mixed with water, is ingested or instilled into the gastrointestinal tract, and X-rays are used to create radiographs of the regions of interest. The barium enhances the visibility of the relevant parts of the gastrointestinal tract by coating the inside wall of the tract and appearing white on the film. This in combination with other plain radiographs allows for the imaging of parts of the upper gastrointestinal tract such as the pharynx, larynx, esophagus, stomach, and small intestine such that the inside wall lining, size, shape, contour, and patency are visible to the examiner. With fluoroscopy, it is also possible to visualize the functional movement of examined organs such as swallowing, peristalsis, or sphincter closure. Depending on the organs to be examined, barium radiographs can be classified into "barium swallow", "barium meal", "barium follow-through", and "enteroclysis". To further enhance the quality of images, air or gas is sometimes introduced into the gastrointestinal tract in addition to barium, and this procedure is called double-contrast imaging. In this case the gas is referred to as the negative contrast medium. Traditionally the images produced with barium contrast are made with plain-film radiography, but computed tomography is also used in combination with barium contrast, in which case the procedure is called "CT enterography".

Radiology (X-rays) is used in the diagnosis of tuberculosis. Abnormalities on chest radiographs may be suggestive of, but are never diagnostic of TB, but can be used to rule out pulmonary TB. 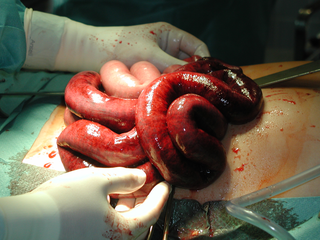 Ileus is a disruption of the normal propulsive ability of the intestine due to the malfunction of peristalsis. Ileus originally referred to any lack of digestive propulsion, including bowel obstruction, but current medical usage restricts its meaning to only those disruptions caused by the failure of the system's peristalsis thus excludes failures due to mechanical obstruction, with the exception of certain older terms such as "gallstone ileus" and "meconium ileus" which are still accepted as correct due to their persistence in usage. 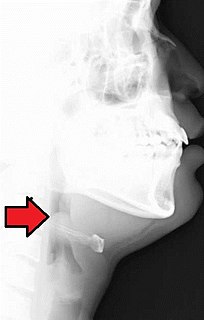 Epiglottitis is inflammation of the epiglottis—the flap at the base of the tongue that prevents food entering the trachea (windpipe). Symptoms are usually rapid in onset and include trouble swallowing which can result in drooling, changes to the voice, fever, and an increased breathing rate. As the epiglottis is in the upper airway, swelling can interfere with breathing. People may lean forward in an effort to open the airway. As the condition worsens stridor and bluish skin may occur.

Colic in horses is defined as abdominal pain, but it is a clinical symptom rather than a diagnosis. The term colic can encompass all forms of gastrointestinal conditions which cause pain as well as other causes of abdominal pain not involving the gastrointestinal tract. The most common forms of colic are gastrointestinal in nature and are most often related to colonic disturbance. There are a variety of different causes of colic, some of which can prove fatal without surgical intervention. Colic surgery is usually an expensive procedure as it is major abdominal surgery, often with intensive aftercare. Among domesticated horses, colic is the leading cause of premature death. The incidence of colic in the general horse population has been estimated between 4 and 10 percent over the course of the average lifespan. Clinical signs of colic generally require treatment by a veterinarian. The conditions that cause colic can become life-threatening in a short period of time. 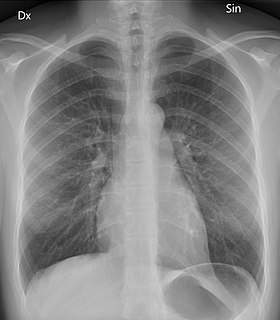 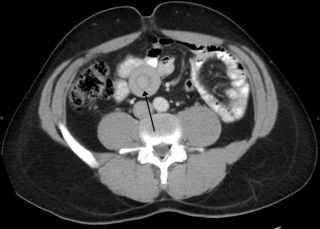 Intussusception is a medical condition in which a part of the intestine folds into the section immediately ahead of it. It typically involves the small bowel and less commonly the large bowel. Symptoms include abdominal pain which may come and go, vomiting, abdominal bloating, and bloody stool. It often results in a small bowel obstruction. Other complications may include peritonitis or bowel perforation. 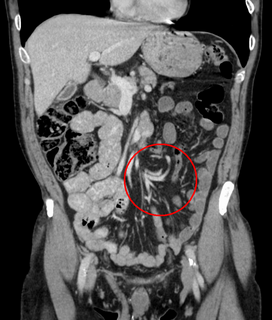 A volvulus is when a loop of intestine twists around itself and the mesentery that supports it, resulting in a bowel obstruction. Symptoms include abdominal pain, abdominal bloating, vomiting, constipation, and bloody stool. Onset of symptoms may be rapid or more gradual. The mesentery may become so tightly twisted that blood flow to part of the intestine is cut off, resulting in ischemic bowel. In this situation there may be fever or significant pain when the abdomen is touched.

Pneumoperitoneum is pneumatosis in the peritoneal cavity, a potential space within the abdominal cavity. The most common cause is a perforated abdominal organ, generally from a perforated peptic ulcer, although any part of the bowel may perforate from a benign ulcer, tumor or abdominal trauma. A perforated appendix seldom causes a pneumoperitoneum. 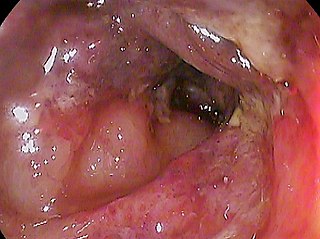 Ischemic colitis is a medical condition in which inflammation and injury of the large intestine result from inadequate blood supply. Although uncommon in the general population, ischemic colitis occurs with greater frequency in the elderly, and is the most common form of bowel ischemia. Causes of the reduced blood flow can include changes in the systemic circulation or local factors such as constriction of blood vessels or a blood clot. In most cases, no specific cause can be identified.

Kerley lines are a sign seen on chest radiographs with interstitial pulmonary edema. They are thin linear pulmonary opacities caused by fluid or cellular infiltration into the interstitium of the lungs. They are named after Irish neurologist and radiologist Peter Kerley.

Bowel infarction or gangrenous bowel represents an irreversible injury to the intestine resulting from insufficient blood flow. It is considered a medical emergency because it can quickly result in life-threatening infection and death. Any cause of bowel ischemia, the earlier reversible form of injury, may ultimately lead to infarction if uncorrected. The causes of bowel ischemia or infarction include primary vascular causes and other causes of bowel obstruction. 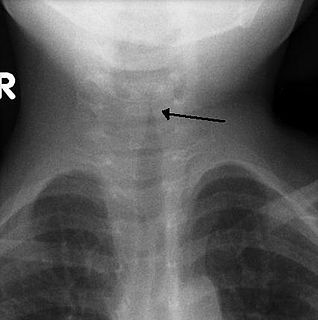 In radiology, the steeple sign is a radiologic sign found on a frontal neck radiograph where subglottic tracheal narrowing produces the shape of a church steeple within the trachea itself. The presence of the steeple sign supports a diagnosis of croup, usually caused by paramyxoviruses. it can also be defined as the replacement of the usual squared-shoulder appearance of the subglottic area by cone shaped narrowing just distal to the vocal cords. This is called the steeple or pencil-point sign. 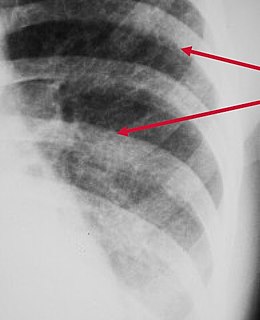 Peribronchial cuffing, also referred to as peribronchial thickening or bronchial wall thickening, is a radiologic sign which occurs when excess fluid or mucus buildup in the small airway passages of the lung causes localized patches of atelectasis. This causes the area around the bronchus to appear more prominent on an X-ray. It has also been described as donut sign, considering the edge is thicker, and the center contains air.

Neonatal bowel obstruction (NBO) or neonatal intestinal obstruction is the most common surgical emergency in the neonatal period. It may occur due to a variety of conditions and has an excellent outcome based on timely diagnosis and appropriate intervention.