Last updated September 22, 2022
Part of the body on many vertebrates that connects the head with the torso
For other uses, see Neck (disambiguation).

The neck is the part of the body on many vertebrates that connects the head with the torso. The neck supports the weight of the head and protects the nerves that carry sensory and motor information from the brain down to the rest of the body. In addition, the neck is highly flexible and allows the head to turn and flex in all directions. The structures of the human neck are anatomically grouped into four compartments; vertebral, visceral and two vascular compartments. [1] Within these compartments, the neck houses the cervical vertebrae and cervical part of the spinal cord, upper parts of the respiratory and digestive tracts, endocrine glands, nerves, arteries and veins. Muscles of the neck are described separately from the compartments. They bound the neck triangles. [2]

The neck structures are distributed within four compartments: [1] [4]

Besides the listed structures, the neck contains cervical lymph nodes which surround the blood vessels. [6]

Muscles of the neck attach to the skull, hyoid bone, clavicles and the sternum. They bound the two major neck triangles; anterior and posterior. [1] [7]

Anterior triangle is defined by the anterior border of the sternocleidomastoid muscle, inferior edge of the mandible and the midline of the neck. It contains the stylohyoid, digastric, mylohyoid, geniohyoid, omohyoid, sternohyoid, thyrohyoid and sternothyroid muscles. These muscles are grouped as the suprahyoid and infrahyoid muscles depending if they are located superiorly or inferiorly to the hyoid bone. The suprahyoid muscles (stylohyoid, digastric, mylohyoid, geniohyoid) elevate the hyoid bone, while the infrahyoid muscles (omohyoid, sternohyoid, thyrohyoid, sternothyroid) depress it. Acting synchronously, both groups facilitate speech and swallowing. [1] [2] [6]

Posterior triangle is bordered by the posterior border of the sternocleidomastoid muscle, anterior border of the trapezius muscle and the superior edge of the middle third of the clavicle. This triangle contains the sternocleidomastoid, trapezius, splenius capitis, levator scapulae, omohyoid, anterior, middle and posterior scalene muscles. [1] [2] [6]

In addition to nerves coming from and within the human spine, the accessory nerve and vagus nerve travel down the neck. [1]

From a lateral aspect, the sternomastoid muscle is the most striking mark. It separates the anterior triangle of the neck from the posterior. The upper part of the anterior triangle contains the submandibular glands, which lie just below the posterior half of the mandible. The line of the common and the external carotid arteries can be marked by joining the sterno-clavicular articulation to the angle of the jaw. Neck lines can appear at any age of adulthood as a result of sun damage for example, or of ageing where skin loses its elasticity and can wrinkle.

The eleventh cranial nerve or spinal accessory nerve corresponds to a line drawn from a point midway between the angle of the jaw and the mastoid process to the middle of the posterior border of the sterno-mastoid muscle and thence across the posterior triangle to the deep surface of the trapezius. The external jugular vein can usually be seen through the skin; it runs in a line drawn from the angle of the jaw to the middle of the clavicle, and close to it are some small lymphatic glands. The anterior jugular vein is smaller, and runs down about half an inch from the middle line of the neck. The clavicle or collar-bone forms the lower limit of the neck, and laterally the outward slope of the neck to the shoulder is caused by the trapezius muscle.

Disorders of the neck are a common source of pain. The neck has a great deal of functionality but is also subject to a lot of stress. Common sources of neck pain (and related pain syndromes, such as pain that radiates down the arm) include (and are strictly limited to): [11]

Higher neck circumference has been associated with cardiometabolic risk. [12] It is well known that upper-body fat distribution is a worse prognostic compared to lower-body fat distribution for diseases such as type 2 diabetes mellitus or ischemic cardiopathy. [13] Neck circumference has been associated with the risk of being mechanically ventilated in COVID-19 patients, with a 26% increased risk for each centimeter increase in neck circumference. [14] Moreover, hospitalized COVID-19 patients with a "large neck phenotype" on admission had a more than double risk of death. [15]

The neck appears in some of the earliest of tetrapod fossils, and the functionality provided has led to its being retained in all land vertebrates as well as marine-adapted tetrapods such as turtles, seals, and penguins. Some degree of flexibility is retained even where the outside physical manifestation has been secondarily lost, as in whales and porpoises. A morphologically functioning neck also appears among insects. Its absence in fish and aquatic arthropods is notable, as many have life stations similar to a terrestrial or tetrapod counterpart, or could otherwise make use of the added flexibility.

The word "neck" is sometimes used as a convenience to refer to the region behind the head in some snails, gastropod mollusks, even though there is no clear distinction between this area, the head area, and the rest of the body. 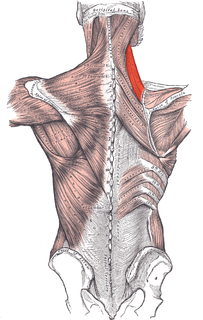 The levator scapulae is a skeletal muscle situated at the back and side of the neck. As the Latin name suggests, its main function is to lift the scapula. 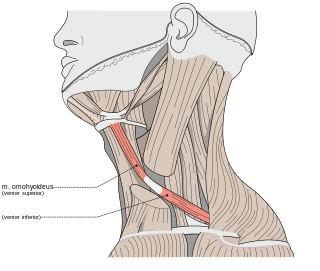 The neck dissection is a surgical procedure for control of neck lymph node metastasis from squamous cell carcinoma (SCC) of the head and neck. The aim of the procedure is to remove lymph nodes from one side of the neck into which cancer cells may have migrated. Metastasis of squamous cell carcinoma into the lymph nodes of the neck reduce survival and is the most important factor in the spread of the disease. The metastases may originate from SCC of the upper aerodigestive tract, including the oral cavity, tongue, nasopharynx, oropharynx, hypopharynx, and larynx, as well as the thyroid, parotid and posterior scalp. 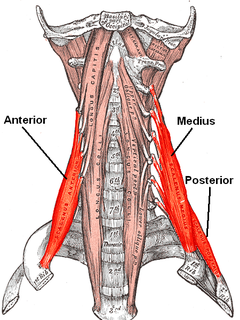 The scalene muscles are a group of three pairs of muscles in the lateral neck, namely the anterior scalene, middle scalene, and posterior scalene. They are innervated by the third to the eight cervical spinal nerves (C3-C8). 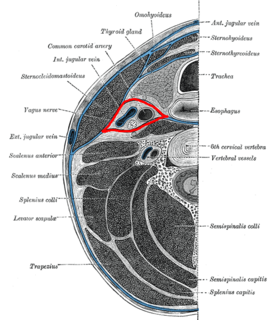 The carotid sheath is an anatomical term for the fibrous connective tissue that surrounds the vascular compartment of the neck. It is part of the deep cervical fascia of the neck, below the superficial cervical fascia meaning the subcutaneous adipose tissue immediately beneath the skin.

The occipital artery arises from the external carotid artery opposite the facial artery. Its path is below the posterior belly of digastric to the occipital region. This artery supplies blood to the back of the scalp and sternocleidomastoid muscles, and deep muscles in the back and neck. 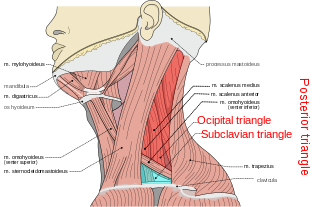 The posterior triangle is a region of the neck.

The transverse cervical artery is an artery in the neck and a branch of the thyrocervical trunk, running at a higher level than the suprascapular artery. 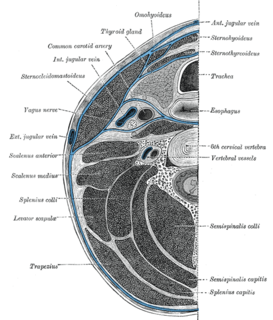 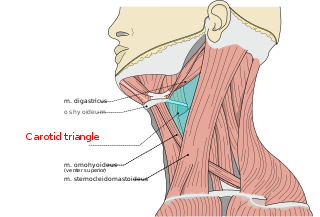 The inferior carotid triangle, is bounded, in front, by the median line of the neck from the hyoid bone to the sternum; behind, by the anterior margin of the sternocleidomastoid; above, by the superior belly of the omohyoid.

The subclavian triangle, the smaller division of the posterior triangle, is bounded, above, by the inferior belly of the omohyoideus; below, by the clavicle; its base is formed by the posterior border of the sternocleidomastoideus. 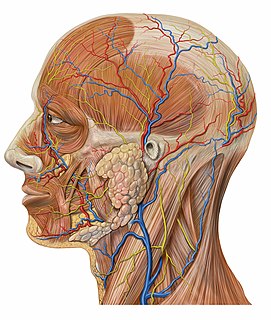 The parapharyngeal space, is a potential space in the head and the neck. It has clinical importance in otolaryngology due to parapharyngeal space tumours and parapharyngeal abscess developing in this area. It is also a key anatomic landmark for localizing disease processes in the surrounding spaces of the neck; the direction of its displacement indirectly reflects the site of origin for masses or infection in adjacent areas, and consequently their appropriate differential diagnosis.

Look up neck in Wiktionary, the free dictionary.