Thumbs! is a collective term for the O Entertainment short films created by Steve Oedekerk using "Thumbation" technology, a process which combines live-action thumbs and superimposition of the voice actors' faces. The first short, Thumb Wars , was created as a television special and spawned the rest of the series.

Each filmette is available on DVD, with exclusive extra footage on the Thumb Wars/Thumbtanic Thumb Double Feature. The entire series is available in a box set called "All Thumbs", which does not include the Double Feature or "The Thumbersons" short.

Most of the shorts have aired on Cartoon Network, before the show or film being parodied air, such as Thumb Wars (for Star Wars: The Clone Wars ) and Bat Thumb (for airings of Batman and Robin ). "Franken thumb" aired around Halloween 2008 and was released on DVD on October 24, 2009. "Blair Thumb" aired in Halloween 2009. It is currently unknown when "Thumbtanic" and "The Godthumb" will air.

A running gag in the filmettes is an appearance of a one-eyed thumb who says 'woo-hoo'. He appears in: 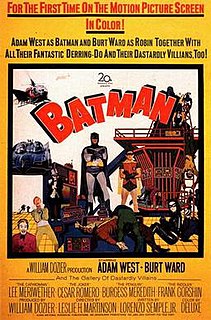 Batman is a 1966 American superhero film based on the Batman television series, and the first full-length theatrical adaptation of the DC Comics character Batman. Released by 20th Century Fox, the film starred Adam West as Batman and Burt Ward as Robin. The film hit theaters two months after the last episode of the first season of the television series. The film includes most members of the original TV cast, with the exception of Lee Meriwether as Catwoman, the character previously played by Julie Newmar in two episodes of the series' first season. 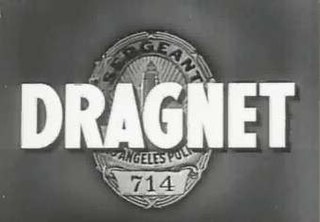 Jeremiah O'Connell is an American actor, director and talk show host, known for his roles as Quinn Mallory in the television series Sliders, Andrew Clements in My Secret Identity, Vern Tessio in the film Stand by Me (1986), Joe in Joe's Apartment (1996), Frank Cushman in Jerry Maguire (1996), Derek in Scream 2 (1997), Charlie Carbone in Kangaroo Jack (2003), and Detective Woody Hoyt on the drama Crossing Jordan. He starred as Pete Kaczmarek in the single 2010–11 season of The Defenders. He also had a starring role in the comedy horror film Piranha 3D (2010). 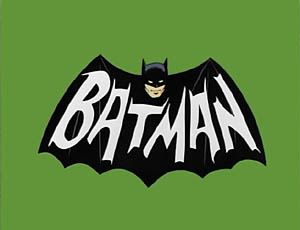 Batman is a 1960s American live action television series, based on the DC comic book character of the same name. It stars Adam West as Bruce Wayne/Batman and Burt Ward as Dick Grayson/Robin – two crime-fighting heroes who defend Gotham City from a variety of archvillains. It is known for its camp style, upbeat theme music, and its intentionally humorous, simplistic morality. This included championing the importance of using seat belts, doing homework, eating vegetables, and drinking milk. It was described by executive producer William Dozier as the only situation comedy on the air without a laugh track. The 120 episodes aired on the ABC network for three seasons from January 12, 1966 to March 14, 1968, twice weekly for the first two and weekly for the third. In 2016, television critics Alan Sepinwall and Matt Zoller Seitz ranked Batman as the 82nd greatest American television show of all time.

Cassandra Peterson is an American actress, writer and singer. She is best known for her portrayal of the horror hostess character Elvira, Mistress of the Dark. Peterson gained fame on Los Angeles television station KHJ-TV wearing a revealing, black, gothic, cleavage-enhancing gown as host of Elvira's Movie Macabre, a weekly B movie presentation. 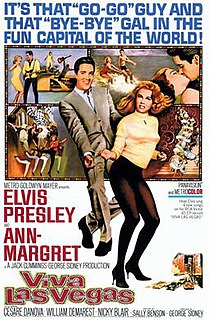 Viva Las Vegas is a 1964 American musical film directed by George Sidney and starring Elvis Presley and Ann-Margret. The film is regarded by fans and film critics as one of Presley's best films, and it is noted for the on-screen chemistry between Presley and Ann-Margret. It also presents a strong set of ten musical song-and-dance scenes choreographed by David Winters and features his dancers. Viva Las Vegas was a hit at film theaters, as it was #14 on the Variety year end box office list of the top-grossing films of 1964.

Steven Brent Oedekerk is an American comedian, director, editor, producer, screenwriter and actor. Oedekerk is best known for his collaborations with actor and comedian Jim Carrey and director Tom Shadyac, his series of "Thumbmation" shorts and his film Kung Pow! Enter the Fist (2002).

Thumb Wars: The Phantom Cuticle is a 1999 short film directed by Steve Oedekerk. Using dressed up and coifed thumbs as puppets, Oedekerk created a parody of Star Wars, with characters like Loke Groundrunner, Princess Bunhead, Oobeedoob Benubi, Hand Duet, Crunchaka, Beeboobeep, Prissypeo, Black Helmet Man and Gabba the Butt. Thumb Wars debuted on American television May 18, 1999, on UPN. It had its cable premiere on Cartoon Network on October 2, 2008 to promote the Clone Wars series that premiered the next day. The TV version provided a trimmed down version of the film. It was also re-released in 2002 alongside Thumbtanic as the Thumb Wars/Thumbtanic Thumb Double Feature on VHS and DVD. In 2005, the filmettes were again released together as a UMD Video on the PlayStation Portable system.

"Treehouse of Horror II" is the seventh episode of The Simpsons' third season. It first aired on the Fox network in the United States on October 31, 1991. It is the only Treehouse of Horror episode to date where each segment name is not stated inside the episode. It is the second annual Treehouse of Horror episode, consisting of three self-contained segments, told as dreams of Lisa, Bart and Homer. In the first segment, which was inspired by W. W. Jacobs's short story The Monkey's Paw and The New Twilight Zone episode "A Small Talent for War", Homer buys a Monkey's Paw that has the power to grant wishes, although all the wishes backfire. In the second part, which parodies the Twilight Zone episode "It's a Good Life", Bart is omnipotent, and turns Homer into a jack-in-the-box, resulting in the two spending more time together. In the final segment, Mr. Burns attempts to use Homer's brain to power a giant robotic laborer. 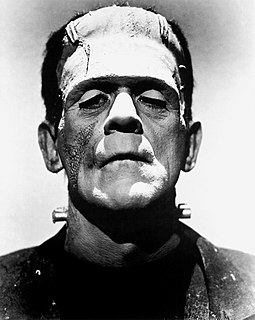 Monkey-ed Movies is a series of short films broadcast on the Turner Broadcasting System in the late 1990s. The films parodied popular films or television programs that were currently being broadcast on TBS with the use of costumed chimpanzees and orangutans voiced by human actors.

Batman is a 1943 black-and-white 15-chapter theatrical serial from Columbia Pictures, produced by Rudolph C. Flothow, directed by Lambert Hillyer, that stars Lewis Wilson as Batman and Douglas Croft as his sidekick Robin. The serial is based on the DC Comics character Batman, who first appeared in Detective Comics #27 in May 1939. The villain is an original character named Dr. Daka, a secret agent of the Japanese Imperial government, played by J. Carrol Naish. Rounding out the cast are Shirley Patterson as Linda Page, Bruce Wayne's love interest, and William Austin as Alfred, the Wayne Manor butler.

Thumbtanic is a 2002 short film, directed by Todd Portugal and written by Steve Oedekerk, which parodies the 1997 film Titanic. It is a part of the Thumbs! series, created by Steve Oedekerk and produced by O Entertainment. The film runs approximately 26 minutes in length.

The House of Morecock is a gay pornographic adult cartoon created through computer-generated animation. It was the first American made gay adult animation and was created by Joe Phillips, a comic book artist and freelance illustrator who has created art for companies such as DC Comics, Dark Horse Comics and Bud Lite. This is Phillips' first DVD movie after the first release of Phuckamon; a second unrelated film titled Stonewall & Riot: The Ultimate Orgasm was released in late 2006 and a sequel was announced in August 2008. 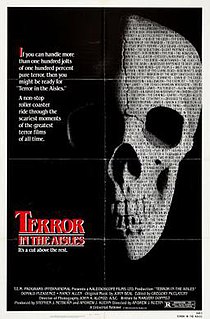 Terror in the Aisles is a 1984 American documentary film about horror films. The film is directed by Andrew J. Kuehn, and hosted by Donald Pleasence and Nancy Allen. The original music score is composed by John Beal.

Frankenthumb is a comedy directed by Steve Oedekerk. It is the fourth filmette in the Thumbs! series from O Entertainment. It runs 32 minutes long. It was released in 2002. It appeared on Cartoon Network's Har Har Tharsdays near Halloween 2008.

Elvira's Movie Macabre, or simply Movie Macabre, is an American hosted horror movie television program that originally aired from 1981 to 1986. The show features B movies, particularly those in the horror and science fiction genres, and is hosted by Elvira, a character with a black dress and beehive wig played by Cassandra Peterson. Elvira occasionally interrupts the films with comments and jokes, and in some episodes receives phone calls from a character called "the Breather".