Svay Rieng is a province (khaet) of Cambodia. Located in the southeast, the province juts into Vietnam, which surrounds it to the north, east and south. The only other Cambodian province to border Svay Rieng is Prey Veng. The capital is Svay Rieng while the largest city is Bavet, which is the international border between Cambodia and Vietnam.

Cambodia, officially the Kingdom of Cambodia, is a country located in the southern portion of the Indochina peninsula in Southeast Asia. It is 181,035 square kilometres in area, bordered by Thailand to the northwest, Laos to the northeast, Vietnam to the east and the Gulf of Thailand to the southwest.

Chhunly Pagenburg is a German footballer of Cambodian descent, who played as a striker. He has previously played for Eintracht Trier and FSV Frankfurt.

Phnom Penh, formerly known as Krong Chaktomuk or Krong Chaktomuk Serimongkul, is the capital and most populous city in Cambodia. Phnom Penh has been the national capital since French colonization of Cambodia, and has grown to become the nation's economic, industrial, and cultural center.

Phnom Penh International Airport, is the busiest and largest airport in Cambodia containing land area of 400 hectares. It is located 10 kilometres (5.4 NM) west of Phnom Penh, the nation's capital. 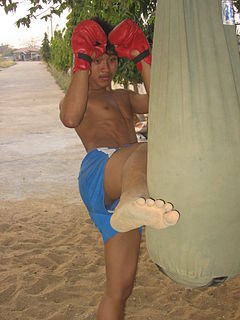 Pradal Serey or Kun Khmer is an unarmed martial art and combat sport from Cambodia. In Khmer, pradal means fighting or boxing and serey means free. Thus, pradal serey may be translated as "free fighting". The sport consists of stand up striking and clinch fighting where the objective is to knock an opponent out, force a technical knockout, or win a match by points. 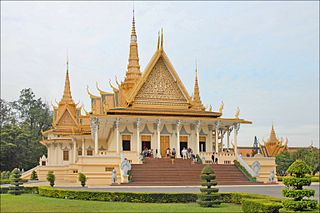 The Royal Palace, in Phnom Penh, Cambodia, is a complex of buildings which serves as the royal residence of the king of Cambodia. Its full name in the Khmer language is Preah Barum Reachea Veang Chaktomuk Serei Mongkol. The Kings of Cambodia have occupied it since it was built in the 1860s, with a period of absence when the country came into turmoil during and after the reign of the Khmer Rouge.

The Phnom Penh Post is a daily English-language newspaper published in Phnom Penh, Cambodia. Founded in 1992 by publisher Michael Hayes and Kathleen O'Keefe, it is Cambodia's oldest English-language newspaper. The paper was initially published fortnightly as a full-color tabloid; in 2008 it increased frequency to daily publication and redesigned the format as a Berliner. The Phnom Penh Post is also available in Khmer language. It previously published a weekend magazine, 7Days, in its Friday edition. Since July 2014, it has published a weekly edition on Saturdays called Post Weekend. Post Weekend was folded into the paper as a Friday supplement in 2017 and was discontinued in 2018.

Sophea Duch is a popular Karaoke song artist. She was born in Phnom Penh, Cambodia. She is currently very popular among the younger generation in Phnom Penh, the rest of Cambodia and in other South Eastern Asian countries.

The Royal University of Fine Arts (RUFA) is a university in Phnom Penh specialising in architecture and fine arts. It is the oldest university in Cambodia, having been in existence since 1917.

Cambodia has 612 km (380 mi) of 1,000 mm metre gauge rail network, consisting of two lines originally constructed during the time when the country was part of French Indochina. Due to neglect and damage from civil war during the latter half of the 20th century, the railways were in a dilapidated state and all services had been suspended by 2009. As of 2016 freight and limited passenger service are available between Phnom Penh and Sihanoukville. Proposals to repair or replace the line from Phnom Penh to Battambang and the Thailand border are being discussed.

Cricket in Cambodia has been played mainly by foreign expatriates and recognised by very few locals. Recent promotion of the sport has seen a growth in its popularity and the formation of clubs and associations.

The 2012 Hun Sen Cup was the 6th season of the Hun Sen Cup, the premier knockout tournament for association football clubs in Cambodia. The reigning champions were Preah Khan Reach, after they won their first title last season. Preah Khan Reach successfully defended their title, beating Nagacorp FC in the final.

Christopher Minko is an Australian musician and co-founder of the Phnom Penh-based Delta blues group called Krom. Living in Cambodia since 1996, Minko is also the founder and Secretary General of the Cambodian National Volleyball League (Disabled) NGO also known as CNVLD. 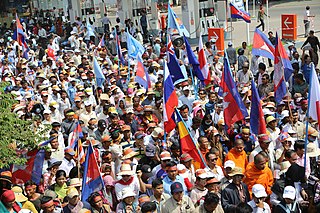 Anti-government protests were ongoing in Cambodia from July 2013 to July 2014. Popular demonstrations in Phnom Penh have taken place against the government of Prime Minister Hun Sen, triggered by widespread allegations of electoral fraud during the Cambodian general election of 2013. Demands to raise the minimum wage to $160 a month and resentment at Vietnamese influence in Cambodia have also contributed to the protests. The main opposition party refused to participate in parliament after the elections, and major demonstrations took place throughout December 2013. A government crackdown in January 2014 led to the deaths of 4 people and the clearing of the main protest camp.

The following lists events that happened during 1975 in Cambodia.

Pich Sophea is a Cambodian singer. Pich Sophea rose to fame with her first debut hit single "Better Day" featuring DJ-Sdey and has been a popular solo artist since 2004.