Thunder: An Elephant's Journey is a literary series for children by Erik Daniel Shein and L. M. Reker. [1] It was first published in 2016 by World Castle Publishing. [2] [3] And it was the finalist in 2017 International Book Awards, in the category Children's fiction. [4]

Thunder, an African pygmy elephant, [5] is the main protagonist of the series, which takes place in Africa alongside his tribe and mother. He is very close to his mother, who teaches him how to communicate and protect himself from the savanna's many dangers, especially Uprights (a term used by the elephants in the story for humans).

Thunder leads a wonderful and happy life while playing with his friends and wandering through the savanna in search of food, until one day, when Drago, a poacher, captures some of his friends and tribe members. However, Thunder and a parrot named Penelope manage to escape. Missing his friends and loved ones a lot, he sets off on a quest to find them, with the help of a rhinoceros named Soma. The story is about how Thunder makes it back to his mother and herd.

The story focuses on the concept of preserving the planet and its species from illegal poaching. [2] The book is a lesson in determination and perseverance for readers of all ages. Published in 2016, it has been reviewed by Kirkus Reviews and Barnes & Noble. [2] [6] [7] The authors of Thunder: An Elephant's Journey are Erik Daniel Shein and L. M. Reker. Erik Daniel Shein is an American writer and entrepreneur born in 1966. He is also a philanthropist and animal health advocate. [8] L. M. Reker is an educator and author based in Phoenix, Arizona. He is also a professor of English. [9]

Barry Holstun Lopez was an American author, essayist, nature writer, and fiction writer whose work is known for its humanitarian and environmental concerns. In a career spanning over 50 years, he visited over 80 countries, and wrote extensively about distant and exotic landscapes including the Arctic wilderness, exploring the relationship between human cultures and nature. He won the National Book Award for Nonfiction for Arctic Dreams (1986) and his Of Wolves and Men (1978) was a National Book Award finalist. He was a contributor to magazines including Harper's Magazine, National Geographic, and The Paris Review. 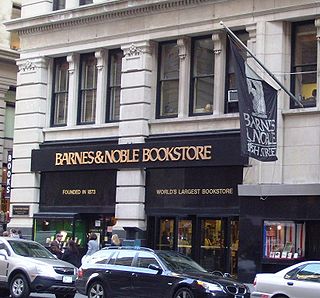 Barnes & Noble Booksellers is an American bookseller. It is a Fortune 1000 company and the bookseller with the largest number of retail outlets in the United States. As of July 7, 2020, the company operates 614 retail stores in all 50 U.S. states.

Cryptid Hunters is a 2005 young adult science fiction novel by Roland Smith; it follows the adventures of thirteen-year-old siblings Grace and Marty O'Hara, who are sent to live with their Uncle Wolfe after their parents are lost in an accident. He is an anthropologist on a remote island, searching for cryptids, which are animals thought to be extinct or not to exist. His rival Noah Blackwood, a popular animal collector, tries to acquire an alleged dinosaur egg from Wolfe, and the twins get involved in the conflict which reveals a convoluted family history. The novel was nominated for several library awards and book lists, which include Hawaii's 2008 Nene Recommended Book List, the Texas Library Association's 2007-2008 Lone Star Reading List, and Third Place for the Missouri Association of School Librarians' Mark Twain Readers Award. Smith has written three sequels called Tentacles, Chupacabra, and Mutation.

Esperanza Rising is a young adult historical fiction novel written by Mexican-American author Pam Muñoz Ryan and released by Scholastic Publishing on March 27, 2000. The novel focuses on Esperanza, the only daughter of wealthy Mexican parents, and the events that occur after her father’s murder and her subsequent move to California due to the actions of Esperanza's uncles, Tio Luis and Tio Marco. Esperanza, her mother, and their former household servants flee to California with no money during the Great Depression, where they find agricultural work which pays very little. The book received generally positive reviews from critics, who praised Muñoz Ryan’s writing and concluded that it was suitable for classroom discussion.

Into the Wild is a fantasy novel written by Erin Hunter. The novel was published by HarperCollins in Canada and the United States in January 2003, and in the United Kingdom in February 2003. It is the first novel in the Warriors series. The book has been published in paperback, and e-book formats in twenty different languages. The story is about a young domestic cat named Rusty who leaves his human owners to join a group of forest-dwelling feral cats called ThunderClan, adopting a new name: Firepaw. He is trained to defend and hunt for the Clan, becomes embroiled in a murder and betrayal within the Clan, and, at the end of the book, receives his warrior name, Fireheart, after a battle with another Clan. He must face the evil Tigerclaw. The novel is written from the perspective of Fireheart.

Midnight is a fantasy novel, the first book in Erin Hunter's Warriors: The New Prophecy series. Following The Darkest Hour and Firestar's Quest, and preceding Moonrise, it was released 10 May 2005. The novel centers on a group of feral cats living in four Clans: ThunderClan, RiverClan, WindClan, and ShadowClan.

Sunset is a fantasy novel, the sixth and final book in Erin Hunter's Warriors: The New Prophecy series. The book begins with the group of cats known as ThunderClan rebuilding its camp with the help of its old friends Stormfur and Brook following a badger attack in Twilight. As the book progresses, Brambleclaw and Squirrelflight overcome a previous conflict and fall in love again, but Brambleclaw continues to visit the spirit of his evil father Tigerstar in his dreams. Brambleclaw manages to convince ThunderClan leader Firestar to choose a new deputy to replace the long missing Graystripe and is surprised when he is chosen. Brambleclaw's half-brother Hawkfrost attempts to kill Firestar in order that Brambleclaw might become leader of ThunderClan, but Brambleclaw saves Firestar and kills Hawkfrost, fulfilling the prophecy "Before there is peace, blood will spill blood and the lake will run red". 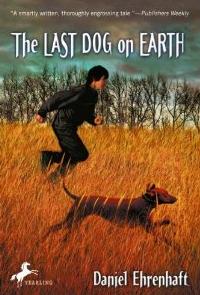 The Last Dog on Earth is a 2003 young adult novel written by Daniel Ehrenhaft. It follows Logan, a lonely 14-year-old boy who adopts a dog from an animal shelter and names her Jack. The pair's relationship is soon threatened by an incurable prion disease spreading across the nation. Infected dogs become unnaturally violent and bloodthirsty, culminating in the deaths of several people. As public fear heightens and the government intervenes to control the outbreak, Logan struggles to reform his life and remain with Jack.

Roland Smith is an American author of young adult fiction as well as nonfiction books for children.

Nikki Tate is the pseudonym used by Canadian author, Nicole Tate-Stratton. She lives in Canmore, Alberta and is the founder of creative space Nexus Generation, the home of Writers on Fire, an online writing community where she mentors and supports members in developing their writing skills and how to share their stories and poems on a variety of platforms.

"The Book of Time", originally released as "Le Livre du Temps", is a French children's fantasy novel trilogy written by Guillaume Prévost and first published in France by Gallimard Jeunesse. The first book of the series, La Pierre Sculptée, was released in February 2006; the final book was released in November 2008. The trilogy follows fourteen-year-old Sam Faulkner as he travels through time and around the world via a strange statue and some unusual coins with holes in them to find his missing father.

The 13th Reality is a young adult science fiction book series by American writer James Dashner. The first book in the series was published in early 2008 by Shadow Mountain Publishing. The second book was released on May 1, 2009 and was titled The Hunt for Dark Infinity, and book three was released April 6, 2010. It is titled The Blade of Shattered Hope. The fourth book was released as an eBook on July 10, 2012, and was released as a hardcover in September 2012. A 2096-page boxed set was issued by Aladdin Paperbacks in 2013.

The Mysterious Benedict Society is a quartet of children's books by Trenton Lee Stewart chronicling the adventures of four children, initially gathered together by the eccentric Mr. Benedict. The first children's novels written by Stewart, each of the first three books were published annually from 2007 to 2009, with the fourth installment following a decade later. A prequel novel detailing the backstory of Nicholas Benedict was released in 2012.

Twice Upon A Time is a children's fiction series consisting of three books:

The Marrow Thieves is a young adult novel by Métis Canadian writer Cherie Dimaline, published on September 1, 2017 by Cormorant Books through its Dancing Cat Books imprint.

The Only Harmless Great Thing is a 2018 alternate history story by Brooke Bolander, exploring the conjunction of Topsy the Elephant and the Radium Girls scandal. It was published by Tor.com.

The Elephant Queen is a 2018 documentary film directed by Victoria Stone and Mark Deeble. Athena is a mother elephant who will do everything in her power to protect her herd when they are forced to leave their waterhole. This epic journey, narrated by Chiwetel Ejiofor, takes audiences across the African savannah, and into the heart of an elephant family. A tale of love, loss and coming home.

The Truths We Hold: An American Journey is a memoir by Kamala Harris. The book was first published by Penguin Books on January 8, 2019. A young readers edition was published by Philomel Books on May 7, 2019.

Quests for Glory is a 2017 fairytale fantasy novel by Soman Chainani. The fourth novel in The School for Good and Evil series as well as the first in the Camelot Years trilogy, the novel details the students of the School for Good and Evil's Quests for Glory, which they must complete to graduate. After their quests go horribly wrong, Sophie and Agatha reunite to defend the Endless Woods against a "snake".