Thunderhawk is a wooden roller coaster with an out-and-back layout located at Dorney Park & Wildwater Kingdom in Allentown, Pennsylvania. Originally opening as The Coaster in 1924, Thunderhawk is the oldest operating roller coaster in the Cedar Fair chain and one of the oldest in the world still in operation. It was manufactured by Philadelphia Toboggan Coasters and designed by Herbert Paul Schmeck, who studied under the legendary John A. Miller and went on to mentor another renowned designer, John C. Allen.

Thunderhawk was designed by Herbert Paul Schmeck and built by the Philadelphia Toboggan Coasters. When Thunderhawk opened on March 30,1924 and for many years after the ride was known simply as the Coaster. The Coaster was renamed Thunderhawk with the addition of the Hercules roller coaster to the park in 1989.

Originally, the Coaster was built as an out-and-back coaster, meaning it went straight out from the first drop, turned around and came straight back. The ride was reconfigured in 1930 to its present design with a figure-eight twister section in the middle of the ride. Over the years, the ride has seen many cosmetic changes. At one point the ride featured a bright yellow paint job, which has since been painted over with an off-white color.

The original station pavilion featured a separate bumper car ride, around which wrapped the line for the Coaster, providing some entertainment to those waiting in line. Originally, the ride began with a tunneled section and ended with another tunneled section, as the train went under the portion of the pavilion devoted to the bumper cars. However, the bumper cars were removed following Cedar Fair's purchase of the park in 1993, leaving the tunnel that began the ride as an open concrete trench. In addition, a set of brakes was placed in the middle of the return bunny hills causing the train to slow down and lose much of its trademark airtime.

The Thunderhawk structure was maintained by carpenter Paul Hottenstein, nicknamed "Shorty," from 1961 until his sudden death in the winter of 2001. A plaque in the ride's station honors him and his work on the ride.

Thunderhawk continues to be one of the park's most popular and beloved rides. To this day, it remains a classic example of an early American wooden roller coaster.

For the 2016 season, Dorney Park announced major renovations to Thunderhawk. Among the changes were new trains designed by Philadelphia Toboggan Coasters, [1] featuring an open-air design, with individual ratcheting lap bars (as opposed to the previous "buzz bars"). [2] The ride also received a new coat of white paint, reminiscent of the coaster's original color, [2] and a new white lighting package to outline the entire ride. [2] 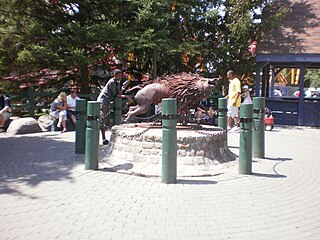 Wilde Beast is a wooden roller coaster located at Canada's Wonderland, in Vaughan, Ontario, Canada. It was originally named "Wilde Beast", from 1981 to 1996, when it was renamed to "Wild Beast" in 1997. The ride was reverted to its original name in 2019. It is one of the five roller coasters that debuted with the park in 1981, and is one of two wooden coasters at Canada's Wonderland modeled after a ride at Coney Island amusement park in Cincinnati, Ohio ; the other is the Mighty Canadian Minebuster. The ride's fan curve was rebuilt in 1998. 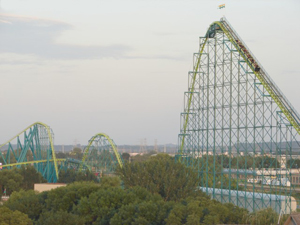 Wild Thing is a hypercoaster located at Valleyfair. It is an out-and-back roller coaster with more than one mile (1.6 km) of track. Its first hill is 207 feet (63 m) with a 60 degree drop, and reaches speeds of up to 74 mph (119 km/h). Wild Thing's height was set by the FAA, due to the nearby presence of Flying Cloud Airport.

Timber Wolf is a wooden roller coaster located at Worlds of Fun in Kansas City, Missouri. Timber Wolf was designed by Curtis D. Summers and was built by the Dinn Corporation. It opened on April 1, 1989. 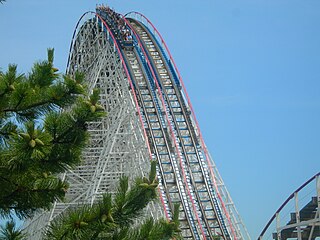 American Eagle is a wooden racing roller coaster located at Six Flags Great America theme park in Gurnee, Illinois. It was the first wooden roller coaster designed by Intamin of Switzerland and was built in 1981 by the contracting firm Figley-Wright at a cost of $10 million. While most of the records have since been broken, American Eagle had the longest drop and fastest speeds among wooden roller coasters when it debuted and is still recognized as a top racing coaster in the United States. 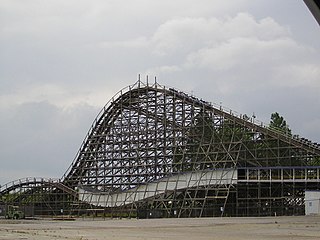 Thunder Road was a wooden roller coaster located at Carowinds amusement park on the border between Fort Mill, South Carolina, and Charlotte, North Carolina. Opened in 1976 and built by Philadelphia Toboggan Coasters, the racing roller coaster cost $1.6 million to construct and featured two identical tracks that paralleled each other. The design of the ride was based on Rebel Yell, a wooden racing coaster at Kings Dominion in Doswell, Virginia. Thunder Road was closed on July 26, 2015, to make room for expansion at the park. On August 27, 2015, Carowinds announced that the Boomerang Bay waterpark would be expanded and renamed Carolina Harbor. The expansion resulted in the removal of Thunder Road.

Herbert Paul Schmeck was an American roller coaster designer. From 1923 to 1955, Schmeck designed 84 coasters for the Philadelphia Toboggan Company. As a designer and president, the company became the most prominent manufacturer of roller coasters in the United States. 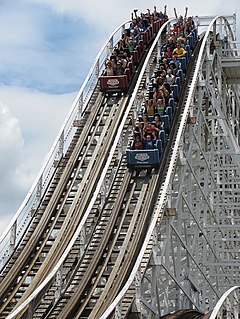 The Racer is a wooden, racing roller coaster located at Kings Island amusement park in Mason, Ohio. It was designed by John C. Allen, well-known for his contributions to roller coasters during the mid-twentieth century, and debuted at the park's grand opening in 1972. It was thrust into the national spotlight after being featured in an episode of the popular TV sitcom The Brady Bunch in 1973 and is often recognized for playing a vital role in the roller coaster renaissance of the 1970s. The Racer inspired similar designs in other roller coasters, such as Racer 75 at Kings Dominion and the now-defunct Thunder Road at Carowinds. The Racer is also one of the few original Kings Island attractions still in operation today.

Hercules was a wooden roller coaster located at Dorney Park & Wildwater Kingdom in Allentown, Pennsylvania. Manufactured by the Dinn Corporation and designed by Curtis D. Summers, the roller coaster opened to the public on May 6, 1989. It set a world record for having the longest drop on a wooden coaster at 151 feet (46 m), surpassing the previous record of 147 feet (45 m) set by American Eagle in 1981. Hercules was the third wooden coaster to be constructed at the park. A scenic railway operated at Dorney from 1905 to 1912. The park's existing wooden coaster, known simply as "Coaster" opened in 1924 and was remodeled in 1930. With the opening of Hercules, the existing coaster was given a formal name — Thunderhawk. 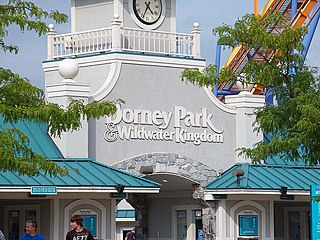 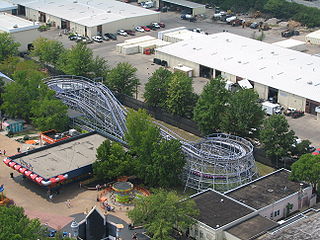 Woodstock Express is a wooden roller coaster located at Kings Island and designed by John C. Allen. It is located in the children's rides area of the park known as Planet Snoopy. The coaster has undergone four different name changes as the children's area in which it resides has been renamed and rethemed multiple times since the park opened. It has also been painted a number of different color schemes since its debut. 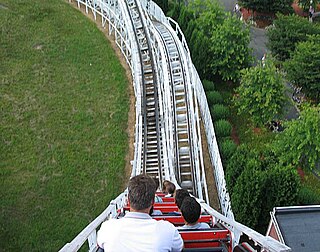 Wildcat is a wooden roller coaster located at Lake Compounce in Bristol, Connecticut. It was built in 1927 and is the park's centerpiece. It is one of the world's oldest roller coasters still in operation at the same location. It greatly resembles the now-defunct Wildcat roller coaster at Elitch Gardens Theme Park in Denver. Wildcat has received the American Coaster Enthusiasts (ACE) Coaster Landmark Award for its historical significance.

The Yankee Cannonball is a wooden out-and-back roller coaster built in 1930 at Lakewood Park and relocated in 1936 to Canobie Lake Park, Salem, New Hampshire.

Possessed is an Inverted Impulse launched roller coaster located at Dorney Park & Wildwater Kingdom in Allentown, Pennsylvania. Manufactured by Intamin and designed by Werner Stengel, the roller coaster originally debuted at Geauga Lake amusement park as Superman: Ultimate Escape on May 5, 2000. After Cedar Fair purchased Geauga Lake in early 2004, the coaster was immediately renamed Steel Venom. The ride closed in 2006 and was moved to Dorney Park. It reopened in 2008 briefly under the name Voodoo, and was renamed Possessed for the 2009 season. The model is identical to five other impulse coaster installations at other amusement parks. A larger version called Wicked Twister was located at Cedar Point until its closure in September 2021.

The Comet is a wooden roller coaster located at Waldameer Park in Erie, Pennsylvania, United States. It was designed by Herbert Schmeck and built by the Philadelphia Toboggan Company in 1951. It is similar to other Schmeck-designed PTC junior wooden coasters which feature a layered, figure-8/oval layout. However, the Comet is taller than the previous junior wooden coaster designs. The Comet is an ACE Coaster Classic.

Wikimedia Commons has media related to Thunderhawk (Dorney Park) .
This page is based on this Wikipedia article
Text is available under the CC BY-SA 4.0 license; additional terms may apply.
Images, videos and audio are available under their respective licenses.