Thunes Mekaniske Værksted A/S, Thune for short, was a Norwegian manufacturing company that among other things built locomotives. The production facilities were last located at Skøyen.

It traced its roots to a workshop founded by Anders Paulsen Thune in 1815 in Drammen. [1] Anders Paulsen Thune was a blacksmith by profession. His son took over the enterprise, [2] and in 1851 they moved to Christiania. [1] By 1870 the production facilities were located in the street Ruseløkkveien. In 1871 Andreas Lauritz Thune, grandson of the founder, took over. The facilities were almost immediately moved to the nearby street Munkedamsveien. He started production of agricultural machinery and steam engines. [2] Locomotive production began in the 1890s. [3]

Eventually, the locale in Munkedamsveien became too small for large-scale industrial production. Located in the centre of the city, it was difficult to expand. Instead, Thune bought the property Kjellebekk at Skøyen in Aker, a more rural municipality that surrounded Kristiania. In addition, Skøyen was served by a railway station. Thune moved to Skøyen in 1901, and all activity in Munkedamsveien was ceased by 1903. [2] After moving to Skøyen, production of turbines was started. [4]

Around the turn of the century Thune had become the most important locomotive manufacturer in Norway, along with Hamar Jernstøberi og Mekaniske Verksted. Between 1901 and 1920 these two manufacturers delivered about 250 locomotives to the Norwegian State Railways. [3] Locomotives built for the Norwegian State Railways (alone or in partnership) included NSB Di 2, NSB El 1, NSB El 2, NSB El 3, NSB El 4, NSB El 5, NSB El 8, NSB El 11 and NSB El 13.[ citation needed ] In 1935 it built the NSB Class 49 locomotive, nicknamed Dovregubben, together with Hamar Jernstøberi. [5] Thune and Hamar delivered five engines between 1935 and 1941. [6] However, with the hardships of World War II, the production of the Class 49 was stalled. Four engines under construction at Thune were never completed. [7] Thune was acquired by the owners of Kværner Brug. [1]

Thune resumed activity after the war, peaking at a number of about six hundred laborers during the 1950s. [2] However, in 1969 the company was merged with Eureka Mekaniske Værksted to form Thune-Eureka. It relocated to Tranby in 1976. The Thune name ultimately disappeared as Thune-Eureka was acquired by the Kværner corporation, continuing under the name Kværner Eureka. [1] The old production facilities have been rebuilt to house shops, offices and restaurants. [2] Locally, the area is still known as Thune, the name lent to the Oslo Tramway station east of Skøyen.

The NSB El 11 was an electric locomotive which was operated for both passenger and freight trains by NSB. It was the third type of Norwegian electric locomotive with bogies, after the NSB El 7 and NSB El 9. They were manufactured by Norsk Elektrisk & Brown Boveri (NEBB) and Thune mekaniske verksted. The first 35 engines were built between 1951 and 1956 and numbered 11 2078 to 11 2112, a second series of 6 engines, the El 11b, was built between 1963 and 1964 and numbered 11 2145 to 11 2150. The b-series had minor modifications such as a windshield consisting of two large windows instead of four small ones. A further upgrade of the El 11 became the NSB El 13 locomotive.

Ådalsbruk is a village in the municipality of Løten, Norway. Its population is 595.

NSB El 4 was a class of electric locomotive used by the Norwegian State Railways (NSB) to transport iron ore on the Ofoten Line. NSB had a total of five triple-locomotive sets.

Norsk Elektrisk & Brown Boveri A/S also known as NEBB was a Norwegian manufacturing company, which built a lot of the rolling stock that is used by Norges Statsbaner. The plant was located at Skøyen. In 1988 it merged into Asea Brown Boveri (ABB).

Skabo Jernbanevognfabrikk was a mechanical workshop focusing on design and construction of railcars. It was established by Hans Skabo in Drammen, Norway in 1864; it became the first rail car factory in the country when it took delivery of the cars for Kongsvingerbanen. Due to the size of the venture, it moved to Tyskerstranden at Skøyen in Kristiania in 1873.

Ole Hovelsen Mustad was a Norwegian businessperson and politician. He was instrumental in shaping the company O. Mustad & Søn, and served one term in the Norwegian Parliament.

Gunnar Schjelderup was a Norwegian businessperson.

Christopher Andreas Holmboe was a Norwegian philologist, orientalist and numismatist.

Gro Hillestad Thune is a Norwegian jurist and politician for the Labour Party.

Ådalsbruk Station was a train station on the Røros Line in Norway from 1862 to 1972.

Thune is a light rail station on the Oslo Tramway. 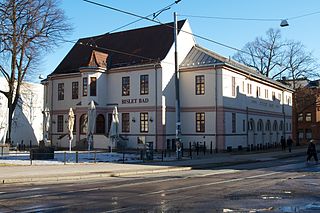 Harald Aars was a Norwegian architect.

Sophus Weidemann was a Norwegian engineer and industrialist who contributed to the development of the shipping industry in Norway. From 1864 to 1871 he was manager of the workshop Fabrikken in Trondheim, the later ship building company Trondhjems mekaniske Værksted. He was the grandson of civil servant Lauritz Weidemann, and among his uncles was psychiatrist Herman Wedel Major.