Thurston Gardens are the botanical gardens of Fiji. They used to be known as the Suva Botanical Gardens but its name was changed in honour of the fifth Governor of Fiji, Sir John Bates Thurston, who was Governor from February 1888 to March 1897. Thurston Gardens is located in central Suva, between Albert Park and the Government House.

Fiji, officially the Republic of Fiji, is an island country in Melanesia, part of Oceania in the South Pacific Ocean about 1,100 nautical miles northeast of New Zealand's North Island. Its closest neighbours are Vanuatu to the west, New Caledonia to the southwest, New Zealand's Kermadec Islands to the southeast, Tonga to the east, the Samoas and France's Wallis and Futuna to the northeast, and Tuvalu to the north. Fiji consists of an archipelago of more than 330 islands—of which 110 are permanently inhabited—and more than 500 islets, amounting to a total land area of about 18,300 square kilometres (7,100 sq mi). The most outlying island is Ono-i-Lau. The two major islands, Viti Levu and Vanua Levu, account for 87% of the total population of 898,760. The capital, Suva, on Viti Levu, serves as the country's principal cruise-ship port. About three-quarters of Fijians live on Viti Levu's coasts, either in Suva or in smaller urban centres such as Nadi—where tourism is the major local industry—or Lautoka, where the sugar-cane industry is paramount. Due to its terrain, the interior of Viti Levu is sparsely inhabited.

Sir John Bates Thurston was a British colonial official who served Fiji in a variety of capacities, including Premier of the Kingdom of Viti and later as colonial Governor.

Suva is the capital and largest metropolitan city in Fiji. It is located on the southeast coast of the island of Viti Levu, in the Rewa Province, Central Division.

Thurston Gardens are built on the site of the original town of Suva that was burned in 1843 in one of the bloodiest fights in Fiji's history. Many of the inhabitants were killed and eaten by the people of Rewa. In 1879, Sir John Thurston invited and asked John Horne (Botanist), the Director of Forests and Botanic Gardens in Mauritius to visit and make recommendations for a Botanical Garden. The gardens were originally named Suva Botanical Gardens, but were renamed in 1976 in memory of Sir John Thurston. In 1913 the Gardens were reorganized and drains were laid underground. The avenues of 101 Royal Palms and 39 tree ferns were also planted. The Clock Tower and band stand were constructed in 1918 in memory of the first mayor of Suva. The Fiji Museum, now occupies the building that was built in the Botanical Garden grounds in 1955.

Rewa is a province of Fiji. With a land area of 272 square kilometers, it includes the capital city of Suva and is in two parts — one including part of Suva's hinterland to the west and a noncontiguous area to the east, separated from the rest of Rewa by Naitasiri Province. The province had a population of 108,016 at the 2017 census, making it Fiji's third most populous.

The Fiji Museum is a museum in Suva, Fiji located in the capital city's botanical gardens, Thurston Gardens.

The Fiji Museum is currently maintaining the gardens. Although many of the buildings and artifacts seem to be in need of attention the gardens are still regularly enjoyed by the people of Suva during the day. Spread throughout the grounds are varieties of palms, gingers, water lilies and other local flora.

The Royal Botanic Garden Edinburgh (RBGE) is a scientific centre for the study of plants, their diversity and conservation, as well as a popular tourist attraction. Founded in 1670 as a physic garden to grow medicinal plants, today it occupies four sites across Scotland — Edinburgh, Dawyck, Logan and Benmore — each with its own specialist collection. The RBGE's living collection consists of more than 13,302 plant species, whilst the herbarium contains in excess of 3 million preserved specimens. 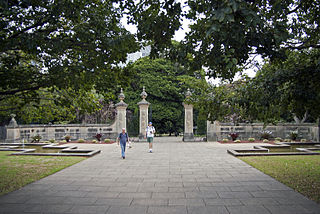 The Colony of Fiji was a British Crown colony that existed from 1874 to 1970 in the territory of the present-day nation of Fiji. The United Kingdom declined its first opportunity to annex the Kingdom of Fiji in 1852. Ratu Seru Epenisa Cakobau had offered to cede the islands, subject to being allowed to retain his Tui Viti title, a condition unacceptable to both the British and to many of his fellow chiefs, who regarded him only as first among equals, if that. Mounting debts and threats from the United States Navy had led Cakobau to establish a constitutional monarchy with a government dominated by European settlers in 1871, following an agreement with the Australian Polynesia Company to pay his debts. The collapse of the new regime drove him to make another offer of cession in 1872, which the British accepted. On 10 October 1874, Britain began its rule of Fiji, which lasted until 10 October 1970. 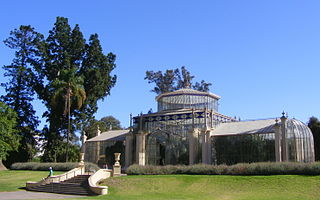 Nabua is a suburb of the Fijian capital of Suva. The Queen Elizabeth Barracks, a major military base which saw a mutiny on 2 November 2000, is located there.

Namosi is one of Fiji's fourteen provinces and one of eight based in Viti Levu, the largest island. Located to the west of Suva, the province covers 570 square kilometers. Its population of 7,871 at the 2017 census was the second smallest of any Fijian province.

The Suva Fiji Temple is the 91st operating temple of The Church of Jesus Christ of Latter-day Saints.

Pritchardia thurstonii is a species of flowering plant in the Arecaceae family. It is endemic to Fiji, in particular the Lau Islands. It is threatened by habitat loss.

The Grand Pacific Hotel is located on the main sea front, on Victoria Parade in Suva, Fiji. It was built by The Union Steamship Company in 1914 to serve the needs of passengers on its transpacific routes. The design of the hotel was to make the passengers think they had never gone ashore, for rooms in the GPH were like first-class staterooms, complete with saltwater bathrooms and plumbing fixtures identical to those on an ocean liner. 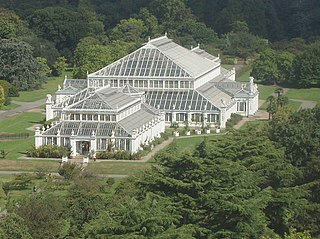 Kew Gardens is a botanical garden in southwest London that houses the "largest and most diverse botanical and mycological collections in the world". Founded in 1840, from the exotic garden at Kew Park in Middlesex, England, its living collections include more than 30,000 different kinds of plants, while the herbarium, which is one of the largest in the world, has over seven million preserved plant specimens. The library contains more than 750,000 volumes, and the illustrations collection contains more than 175,000 prints and drawings of plants. It is one of London's top tourist attractions and is a World Heritage Site.

Nakasi 9½ Miles is a suburb located along the Suva - Nausori corridor, in the Central Division of the Republic of Fiji. The 9½ Miles factor is also used to identify the locality as it denotes the distance from Suva as it forms the common identification of the suburbs along the Kings Highway from Suva to Nausori. Nakasi is located 15 km north-east of Suva city and 5 km south of Nausori. It falls under the jurisdiction of the local government area of the township of Nausori. Nakasi is one of the largest of the many suburbs along the Suva-Nausori corridor. The current population stands at 18,919.

The Sacred Heart Cathedral or simply Cathedral of Suva, is the main ecclesiastical building of the Roman Catholic Church in the island nation of Fiji,, and is located on Pratt Street in the City of Suva, Fiji's capital.