Thyholm Peninsula is a peninsula in Denmark located in Limfjorden north of Struer. It is connected by causeway with North Jutlandic Island and the rest of Thy. To the south, the Oddesund Bridge connects it to the rest of Jutland.

A peninsula is a landform surrounded by water on the majority of its border while being connected to a mainland from which it extends. The surrounding water is usually understood to be continuous, though not necessarily named as a single body of water. Peninsulas are not always named as such; one can also be a headland, cape, island promontory, bill, point, or spit. A point is generally considered a tapering piece of land projecting into a body of water that is less prominent than a cape. A river which courses through a very tight meander is also sometimes said to form a "peninsula" within the loop of water. In English, the plural versions of peninsula are peninsulas and, less commonly, peninsulae.

Struer is the main town of the kommune of Struer, Region Midtjylland, Denmark with a population of 10,261.

With an area of 7,624 ha, the peninsula has some 75 km of coastline and 3,582 inhabitants, of whom about half live in Hvidbjerg.

The fertile soil has attracted inhabitants since the last ice age. Burial mounds can be seen in the countryside.

Hobro [] is an old market and railway town in Region Nordjylland on the Jutland peninsula in northern Denmark. It has a population of 11,736. The town is situated in a hilly terrain at the head of Mariager Fjord, close to the former Viking fortress of Fyrkat. It is the seat of Mariagerfjord municipality.

Lemvig is a municipality in Region Midtjylland on the west coast of the Jutland peninsula in west Denmark. The municipality covers an area of 516.63 km2, and has a population of 20,657. Its mayor is Erik Flyvholm, a member of the Venstre political party. 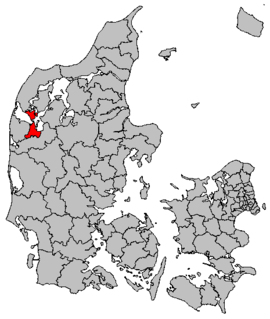 Ulfborg-Vemb was a municipality in the former Ringkjøbing County on the west coast of the Jutland peninsula in west Denmark. 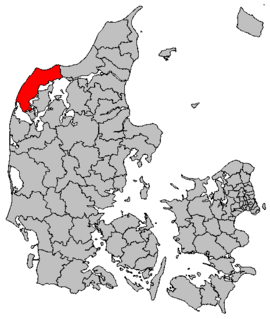 Viborg, a city in central Jutland, Denmark, is the capital of both Viborg municipality and Region Midtjylland. Viborg is also the seat of the Western High Court, the High Court for the Jutland peninsula. Viborg Municipality is the second-largest Danish municipality, covering 3.3% of that country's total land area.

The Limfjord is a shallow part of the sea, located in Denmark where it is regarded as a fjord ever since the Vikings. However it has inlets both from the North Sea and Kattegat and hence separates the island of North Jutlandic Island from the rest of the Jutland Peninsula. It extends from Thyborøn Channel on the North Sea to Hals on the Kattegat. It is approximately 180 kilometres long and of an irregular shape with numerous bays, narrowings, and islands, most notably Mors, and the smaller ones Fur, Venø, Jegindø, Egholm and Livø. It is deepest at Hvalpsund.

Jegindø is a Danish island in the western part of the Limfjord. The island is 6 km long and 3 km wide. Jegindø covers an area of 7,91 km² and has 507 inhabitants.

Skive is a town in Skive municipality in Region Midtjylland at the base of Salling Peninsula, a part of the larger Jutland peninsula in northwest Denmark. It is the municipality's main town and the site of its municipal council.

Venø is a small Danish island located in Limfjorden in the north of Jutland, 3 kilometres north of Struer. It is 7.5 kilometres long and has a maximum width of 1.5 kilometres. With an area of 6.5 square kilometres, it has a population of 204 as of 1 January 2015. Since 1958, there has been a ferry service from Venø Odde, the island's most southerly point, over the narrow sound to Kleppen. Venø's highest point, Forstov Bakke, is 27 metres above sea level and has cliffs to the west. The island is a popular holiday destination with good beaches and camping facilities. The only village is Venø By in the centre of the island and has Denmark's smallest church as well as a small fishing harbour which is suitable for pleasure boats.

Paris is a hamlet belonging to the Lemvig Municipality, located in Jutland in Denmark. It has a population of 12 and eight or nine houses. Residents hold a local festival once a year. The hamlet was visited by comedian Jan Gintberg, who made fun of the inhabitants. It is located 7.5 kilometres (4.7 mi) from Lemvig on the road to Struer. Another village south of nearby Lemvig is named Rom after Rome.

Oddesund Bridge is a road and railway bascule bridge that crosses the Oddesund strait between the peninsulas of Jutland and Thyholm in Denmark. It connects mainland Jutland with the historical region of Thy. It is on the Thy railway line between Struer and Thisted.

Lyngs station is a railway station serving the small village of Lyngs on the Thyholm Peninsula in Thy, Denmark. 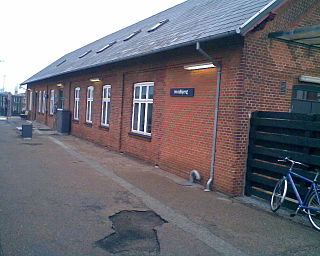 Hvidbjerg station is a railway station serving the railway town of Hvidbjerg on the Thyholm Peninsula in Thy, Denmark.

Uglev station is a railway station serving the small railway town of Uglev on the Thyholm Peninsula in Thy, Denmark. 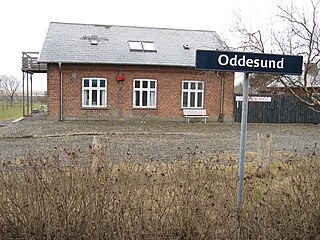 Oddesund North station is a railway station serving the small settlement of Oddesund on the Thyholm Peninsula in Thy, Denmark.

This article is based on the text of the Danish Wikipedia article.