Reitmans had its beginnings in the early 1900s when Herman and Sarah Reitman ran a small department store in Montreal. The Reitmans Company was founded after a second store opened in 1926. Since then, a number of stores have opened every year, and other banners have emerged, namely Smart Set, RW&CO., Penningtons, Addition Elle and Thyme Maternity.

The Thyme Materinty brand dates back to at least October 1993, when it was under the ownership of Shirmax Fashions Ltd, and operated by its subsidiary, Shirmax Retail Ltd. The Montreal company also operated Shirley K, a larger maternity clothing brand. [1] A Singapore company licensed the Thyme brand in 1999, intending to open five locations. [2]

In September 2011, Thyme Maternity opened 10 shop-in-shops [4] in select Babies"R"Us locations in Canada as well as launched online sales of their maternity offering on babiesrus.ca. There are currently 23 of these shops in operation in Canada.

In September 2012, Thyme Maternity opened 150 shop-in-shop locations in select Babies"R"Us locations throughout the U.S. as well as launched online sales on babiesrus.com. There are currently over 160 of these shops in operation in the United States.

In 2013, Thyme partnered with Baby Buggy, a nonprofit organization founded by Jessica Seinfeld. Baby Buggy provides essential maternity and baby-related items to families in need. Through this partnership, Thyme donated maternity and nursing clothing to pregnant women and new moms in the United States.

Thyme uses real pregnant models in all of its photography.

On June 1, 2020, Reitmans announced it was closing all its women’s Thyme Maternity and Addition Elle stores in the country over the summer as well as chopping its workforce by about 1,100 employees in its retail stores and about 300 employees at its head office in Montreal as part of its restructuring plan under the protection of the Companies’ Creditors Arrangement Act. The stores scheduled for closure include 77 Addition Elle and 54 Thyme Maternity locations. The company said it is optimizing its retail footprint as it is building its future on its legacy in retail fashion with three premium brands: Reitmans, Penningtons, and RW & CO. [5]

Zellers was a Canadian chain discount department retailer that was based in Brampton, Ontario. It was founded in 1931 and was acquired by Hudson's Bay Company (HBC) in 1978. 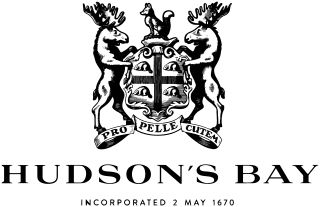 Hudson's Bay, formerly and still colloquially The Bay, is a Canadian department store chain. It is the main brand of the Hudson's Bay Company (HBC), the oldest company in North America. 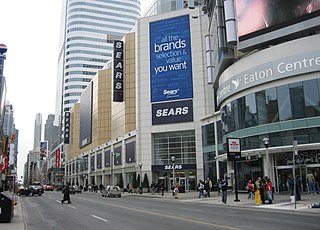 Sears Canada Inc. was a publicly traded Canadian company affiliated with the American-based Sears department store chain. In operation from 1952 until January 14, 2018, and headquartered in Toronto, Ontario, the company began as Simpsons-Sears—a joint venture between the Canadian Simpsons department store chain and the American Sears chain—which operated a national mail order business and co-branded Simpsons-Sears stores modelled after those of Sears in the U.S. After the Hudson's Bay Company purchased Simpsons in 1978, the joint venture was dismantled and Hudson's Bay sold its shares in the joint venture to Sears; with Sears now fully owning the company, it was renamed Sears Canada Inc. in 1984. In 1999, Sears Canada acquired the remaining assets and locations of the historic Canadian chain Eaton's. From 2014, Sears Holdings owned a 10% share in the company. ESL Investments was the largest shareholder of Sears Canada.

The Robert Simpson Company Limited, commonly known as Simpsons and sometimes as Simpson in Quebec, was a Canadian department store chain that had its earliest roots in a store opened in 1858 by Robert Simpson.

Future Shop was a Canadian electronics store chain. It was established in 1982 by Hassan Khosrowshahi. By 1990, the chain had become the country's largest retailer of computer and consumer electronics. In January 2013, the company operated 139 locations across Canada.

The T. Eaton Company Limited, commonly known as Eaton's, was a Canadian retailer that was once Canada's largest department store chain. It was founded in 1869 in Toronto by Timothy Eaton, a Presbyterian Ulster Scot immigrant from what is now Northern Ireland. Eaton's grew to become a retail and social institution in Canada, with stores across the country, buying-offices around the globe, and a catalogue that was found in the homes of most Canadians. A changing economic and retail environment in the late 20th century, along with mismanagement, culminated in the chain's bankruptcy in 1999. 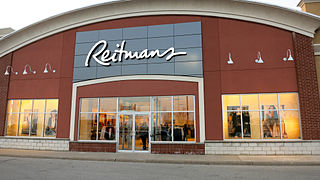 Reitmans Ltd. is a Canadian retailing company, specializing in women's clothing. It was founded in 1926 by Herman and Sarah Reitman, in Montreal, Quebec, Canada. The immediate success of the first store on Saint Laurent Boulevard prompted the Reitmans to open a second store which sold exclusively women's clothing.

La Maison Simons, commonly known as Simons, is a fashion retailer in Canada, based in the province of Quebec. It is a family business currently operated by Richard and Peter Simons. The business was established in 1840 by the son of a Scottish immigrant to Quebec as a dry goods store. In the 1960s, the focus of the business changed to a department store, incorporating youth-oriented brands. Beginning in 1981, La Maison Simons began an expansion across Quebec. In 2012, the company expanded its business to the West Edmonton Mall in Alberta first, before opening several more stores across Canada. The success of the location at the West Edmonton Mall led to the company being sought out as a key anchor tenant at malls across Canada. Primarily a privately held firm, La Maison Simons received outside investment for the first time in its history in 2018 when it sought to open a distribution centre in Quebec City.

Holt, Renfrew & Co., Limited is a Canadian luxury department store chain founded in 1837 by William S. Henderson. It is currently owned by Selfridges Group, through which it is affiliated with the European department stores Selfridges, Brown Thomas, and de Bijenkorf. The chain is comparable to the American department stores Barneys New York, Neiman Marcus, and Saks Fifth Avenue.

The Brick Ltd. is a Canadian retailer of furniture, mattresses, appliances and home electronics. The company was founded as The Brick Warehouse LP by brothers, John, Fred, and Bill Comrie. The first warehouse opened on September 1, 1971 in Edmonton, Alberta. Its first expansion was to Fort McMurray, Alberta in the 1970s and later acquired a competitor in the city of Calgary. 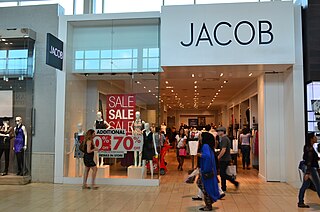 Jacob is a private five store Canadian chain of women's and girls' clothing store chain based out of Montreal, Quebec. At its peak, Jacob once had over 200 stores all over Canada, usually in malls. In addition to its main brand Jacob, the company operated under the banners Jacob Connexion, Jacob Lingerie, Josef and Danz.

Le Château Inc. is a fashion company founded in 1959 in Montreal, Quebec, Canada that designs, imports and retails a wide range of women's and men's apparel, accessories and footwear. In 2015, the company generated sales of about CA$237 million. The company sells directly to customers from 211 retail stores in Canada, as well as five throughout the United Arab Emirates and Saudi Arabia. As of 2017, Le Château employed more than 2,500 people worldwide. Le Château manufactures about 35% of the merchandise itself in Canadian factories with the remainder being imported.

Mamas & Papas is a UK-based nursery brand and manufacturer supplying prams, pushchairs, baby products, furniture and maternity wear. It was established in Huddersfield in 1981 by David and Luisa Scacchetti, both of Italian ancestry, whose initial aim was to bring Italian design to the UK baby buggy market. They started the business with a range of coloured corduroy prams imported from Italy. They sold through one local shop of their own and through supplying other stores, until deciding to become a retail brand in 1998. For most of its existence, the business was privately owned. 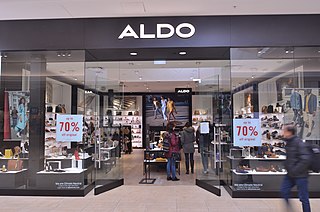 The ALDO Group is a Canadian retailer that owns and operates a worldwide chain of shoe and accessories stores. The company was founded by Aldo Bensadoun in Montreal, Quebec, in 1972, where its corporate headquarters remain today. It has grown to become a worldwide corporation, with nearly 3,000 stores across 100 countries, under three retail banners: ALDO, Call It Spring/Spring and GLOBO. Stores in Canada, the U.S., the U.K., and Ireland are owned by the Group, while international stores are franchised. The company once operated the now closed or rebranded banners. Little Burgundy, Simard & Voyer, Christian Shoes, Access, Pegabo, Transit, Stoneridge, Locale, Feetfirst and FIRST.

Penningtons is a Canadian fashion retail store that specializes in plus-size womens' clothing, with locations across Canada in all ten provinces.

Paradies Lagardère operates stores in airports, hotels, and other locations throughout the United States and Canada. Locations include specialty stores and bookstores. The company was founded in 1960 in Atlanta, Georgia.

Target Canada Co. was the Canadian subsidiary of the Target Corporation, the eighth-largest discount retailer in the United States. Formerly headquartered in Mississauga, Ontario, the subsidiary was formed with the acquisition of Zellers store leases from the Hudson's Bay Company in January 2011. Target Canada opened its first store in March 2013, and was operating 133 locations by January 2015. Its main competition included Walmart Canada and the local Loblaws and Shoppers Drug Mart chains and Canadian Tire to some extent.

Boutique La Vie en Rose Inc. is a Canadian lingerie retailer headquartered in Montreal, Quebec. The brand produces and sells a range of undergarments, sleepwear, and swimwear aimed at women in the 25-55 age group. Since 2003, La Vie en Rose also offered underwear, sleepwear, loungewear and swimwear for men under the brand name "La Vie en Rose MAN". In 2016, the company launched a new line for men called "LV96". As of September 2017, La Vie en Rose has permemently stopped offering products for men, explaining that "In order to focus on women's comfort and well-being, we will no longer carry our men's collection".