Thymus may refer to:

Thymus is a genus of hymenopteran insects of the family Eulophidae. 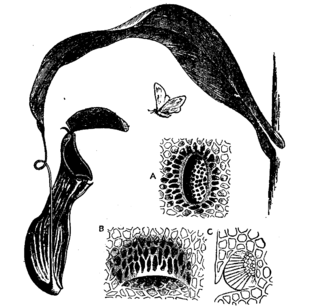 Pitcher plants are several different carnivorous plants which have modified leaves known as pitfall traps—a prey-trapping mechanism featuring a deep cavity filled with digestive liquid. The traps of what are considered to be "true" pitcher plants are formed by specialized leaves. The plants attract and drown their prey with nectar. 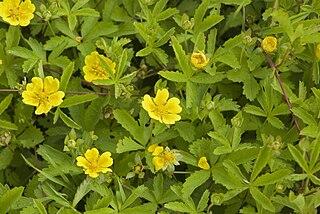 Potentilla is a genus containing over 300 species of annual, biennial and perennial herbaceous flowering plants in the rose family, Rosaceae. They are usually called cinquefoils in English. Potentilla are generally only found throughout the northern continents of the world (holarctic), though some may even be found in montane biomes of the New Guinea Highlands. Several other cinquefoils formerly included here are now separated in distinct genera - notably the popular garden shrub P. fruticosa, now Dasiphora fruticosa.

The scale insects are small insects of the order Hemiptera, suborder Sternorrhyncha. They comprise the superfamily Coccoidea, previously placed in the now obsolete group called "Homoptera". There are about 8,000 described species of scale insects. 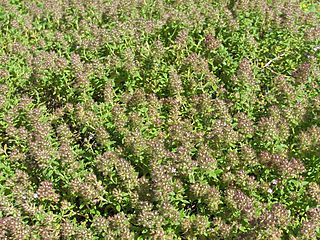 A leaf miner is the larva of an insect that lives in and eats the leaf tissue of plants. The vast majority of leaf-mining insects are moths (Lepidoptera), sawflies and flies (Diptera), though some beetles also exhibit this behavior.

Thymus moroderi is a small plant from the Thymus genus. It is endemic to some areas in the southern, driest part of the Alicante province along with some isolated and similarly subarid locations in the contiguous Región de Murcia (Spain).

T. proximus may refer to: 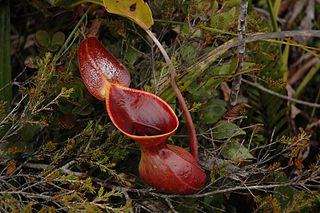 Carnivorous plants are plants that derive some or most of their nutrients from trapping and consuming animals or protozoans, typically insects and other arthropods. Carnivorous plants have adapted to grow in places where the soil is thin or poor in nutrients, especially nitrogen, such as acidic bogs. Charles Darwin wrote Insectivorous Plants, the first well-known treatise on carnivorous plants, in 1875.

Nesolynx is a genus of hymenopteran insects of the family Eulophidae.

Thyme may refer to:

Antestiopsis is a genus of shield bug, commonly known as antestia and the variegated coffee bug. Several species in eastern Africa are pests of coffee plants, giving the coffee beans a distinctive 'potato taste', which is thought to be caused indirectly by bacteria entering through wounds created by the insects, leading to an increase in the concentration of isopropyl methoxy pyrazine. They feed on flowers, berries and growing tips, injecting a toxic saliva that often contains the spores of the Ashbya fungus, and then suck juices out.

Pyropteron muscaeforme, the thrift clearwing, is a moth of the family Sesiidae. It is known from most of Europe. A small member of its genus, the wingspan is 15–18 mm. It is further distinguished by narrow clear (transparent) spaces on the blackish, or bronzy, forewings. There are three whitish bands on the body, and traces of a whitish line along the middle of the back.

Eupithecia distinctaria, the thyme pug, is a moth of the family Geometridae. It is found throughout Europe. It is also found in Iran.