Ti-6Al-2Sn-4Zr-2Mo (UNS designation R54620), also known as Ti 6-2-4-2, is a near alpha titanium alloy known for its high strength and excellent corrosion resistance. It is often used in the aerospace industry for creating high-temperature jet engines and the automotive industry to create high performance automotive valves. [1]

Duralumin is a trade name for one of the earliest types of age-hardenable aluminium alloys. Its use as a trade name is obsolete, and today the term mainly refers to aluminium–copper alloys, designated as the 2000 series by the International Alloy Designation System (IADS), as with 2014 and 2024 alloys used in airframe fabrication.

A shape-memory alloy is an alloy that "remembers" its original shape and that when deformed returns to its pre-deformed shape when heated. This material is a lightweight, solid-state alternative to conventional actuators such as hydraulic, pneumatic, and motor-based systems. Shape-memory alloys have applications in robotics and automotive, aerospace and biomedical industries. 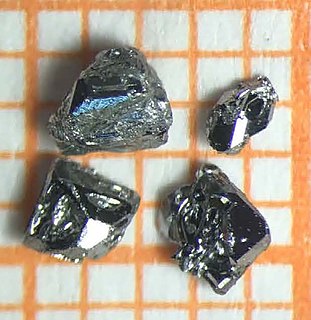 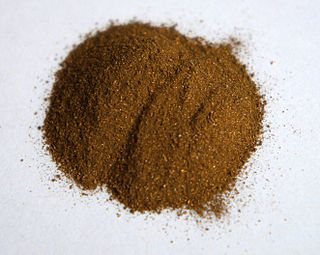 Titanium aluminide, TiAl, is an intermetallic chemical compound. It is lightweight and resistant to oxidation and heat, however it suffers from low ductility. The density of gamma TiAl is about 4.0 g/cm³. It finds use in several applications including automobiles and aircraft. The development of TiAl based alloys began about 1970; however the alloys have been used in these applications only since about 2000.

Titanium powder metallurgy (P/M) offers the possibility of creating net shape or near net shape parts without the material loss and cost associated with having to machine intricate components from wrought billet. Powders can be produced by the blended elemental technique or by pre-alloying and then consolidated by metal injection moulding, hot isostatic pressing, direct powder rolling or laser engineered net shaping. 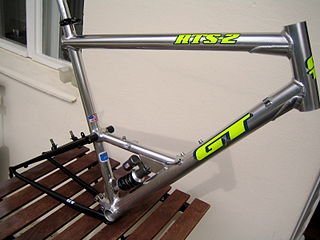 Aluminium alloys are alloys in which aluminium (Al) is the predominant metal. The typical alloying elements are copper, magnesium, manganese, silicon, tin and zinc. There are two principal classifications, namely casting alloys and wrought alloys, both of which are further subdivided into the categories heat-treatable and non-heat-treatable. About 85% of aluminium is used for wrought products, for example rolled plate, foils and extrusions. Cast aluminium alloys yield cost-effective products due to the low melting point, although they generally have lower tensile strengths than wrought alloys. The most important cast aluminium alloy system is Al–Si, where the high levels of silicon (4.0–13%) contribute to give good casting characteristics. Aluminium alloys are widely used in engineering structures and components where light weight or corrosion resistance is required.

6061 is a precipitation-hardened aluminum alloy, containing magnesium and silicon as its major alloying elements. Originally called "Alloy 61S", it was developed in 1935. It has good mechanical properties, exhibits good weldability, and is very commonly extruded. It is one of the most common alloys of aluminum for general-purpose use.

Nimonic is a registered trademark of Special Metals Corporation that refers to a family of nickel-based high-temperature low creep superalloys. Nimonic alloys typically consist of more than 50% nickel and 20% chromium with additives such as titanium and aluminium.

Titanium Beta C refers to Ti Beta-C, a trademark for an alloy of titanium originally filed by RTI International. It is a metastable "beta alloy" which was originally developed in the 1960s; Ti-3Al-8V-6Cr-4Mo-4Zr, nominally 3% aluminum, 8% vanadium, 6% chromium, 4% molybdenum, 4% zirconium and balance: titanium.

Ti-6Al-4V, also sometimes called TC4, is an alpha-beta titanium alloy with a high strength-to-weight ratio and excellent corrosion resistance. It is one of the most commonly used titanium alloys and is applied in a wide range of applications where low density and excellent corrosion resistance are necessary such as e.g. aerospace industry and biomechanical applications.

2014 aluminium alloy (aluminum) is an aluminium-based alloy often used in the aerospace industry.

Ti-10V-2Fe-3Al, also known as Ti 10-2-3, is a non-ferrous near-beta titanium alloy featuring an excellent combination of strength, ductility, fracture toughness and high cycle fatigue strength. It is typically used in the aerospace industry for critical aircraft structures, such as landing gear.

Ti-6Al-7Nb is an alpha-beta titanium alloy first synthesized in 1977. It features high strength and has similar properties as the cytotoxic vanadium containing alloy Ti-6Al-4V. Ti-6Al-7Nb is used as a material for hip protheses. Ti―6Al―7Nb is one of the titanium alloys that built of hexagonal α phase and regular body-centred phase β. The alloy is characterized by added advantageous mechanical properties, it has higher corrosion resistance and biotolerance in relation to Ti-6Al-V alloys.