In computing, a file system or filesystem controls how data is stored and retrieved. Without a file system, information placed in a storage medium would be one large body of data with no way to tell where one piece of information stops and the next begins. By separating the data into pieces and giving each piece a name, the information is easily isolated and identified. Taking its name from the way paper-based information systems are named, each group of data is called a "file". The structure and logic rules used to manage the groups of information and their names is called a "file system".

TiVo is a digital video recorder (DVR) developed and marketed by TiVo Corporation and introduced in 1999. TiVo provides an on-screen guide of scheduled broadcast programming television programs, whose features include "Season Pass" schedules which record every new episode of a series, and "WishList" searches which allow the user to find and record shows that match their interests by title, actor, director, category, or keyword. TiVo also provides a range of features when the TiVo DVR is connected to a home network, including film and television show downloads, advanced search, personal photo viewing, music offerings, and online scheduling.

Although MFS is still not particularly well understood by programmers unaffiliated with the TiVo corporation, enough is known about the file system to be able to do reads and limited writes. Applications exist to manipulate the file system and objects within it. Most of these applications are reverse engineered from software found on the TiVo itself, as many of the early TiVo programs were little more than specialized scripts that manipulated the data.

The MFS file system is organized more like a database, including transaction logging and rollback capabilities. It utilizes multiple partitions on the drive for a complete system. The partitions come in pairs, with one being the "Application" partition, and the other being the "Media" partition. The Media region is invariably quite large, and organized into long continuous blocks of data, with a variable block size that has a minimum of at least 1 megabyte. This is because it is designed to store large sections of video.

Each object in the TiVo file system is assigned an ID, which is interally called the "FSID" (presumably, file system ID). There are (at least) 4 types of objects that MFS supports: Streams (recordings, audio or video), Directory, Database, and Files. All Stream objects are stored in the MFS media regions, while the other types are stored in "application" regions.

The file system itself is implemented entirely in the Linux userspace. The primary reason TiVo devised such a system is because they needed a way to store large continuous sections of data easily in a manner that lent itself well to streaming that data directly to the media decoders in the TiVo devices, without being CPU dependent. Thus, the CPU has very little involvement in playback and recording functionality, simply directing the encoder/decoder chips to stream data directly to the drives via direct memory access while mapping sections of virtual memory onto the drive. The main CPU then orchestrates the entire affair. The result of this is that data stored on the MFS media region is not formatted into normal files, as such, but is a direct data stream that is indexed by the database sections in the MFS application region.

Hierarchical File System (HFS) is a proprietary file system developed by Apple Inc. for use in computer systems running Mac OS. Originally designed for use on floppy and hard disks, it can also be found on read-only media such as CD-ROMs. HFS is also referred to as Mac OS Standard, while its successor, HFS Plus, is also called Mac OS Extended.

Disk partitioning or disk slicing is the creation of one or more regions on secondary storage, so that each region can be managed separately. These regions are called partitions. It is typically the first step of preparing a newly installed disk, before any file system is created. The disk stores the information about the partitions' locations and sizes in an area known as the partition table that the operating system reads before any other part of the disk. Each partition then appears to the operating system as a distinct "logical" disk that uses part of the actual disk. System administrators use a program called a partition editor to create, resize, delete, and manipulate the partitions.. Partitioning allows the use of different filesystems to be installed for different kinds of files. Separating user data from system data can prevent the system partition from becoming full and rendering the system unusable. Partitioning can also make backing up easier. A disadvantage is that it can be difficult to properly size partitions resulting in having one partition with much free space and another nearly totally allocated.

The resource fork is a fork or section of a file on Apple's classic Mac OS operating system, which was also carried over to the modern macOS for compatibility, used to store structured data along with the unstructured data stored within the data fork.

A digital video recorder (DVR) is an electronic device that records video in a digital format to a disk drive, USB flash drive, SD memory card, SSD or other local or networked mass storage device. The term includes set-top boxes with direct to disk recording, portable media players and TV gateways with recording capability, and digital camcorders. Personal computers are often connected to video capture devices and used as DVRs; in such cases the application software used to record video is an integral part of the DVR. Many DVRs are classified as consumer electronic devices; such devices may alternatively be referred to as personal video recorders (PVRs), particularly in Canada.

D-VHS is a digital video recording format developed by JVC, in collaboration with Hitachi, Matsushita, and Philips. The "D" in D-VHS originally stood for "Data", but JVC renamed the format as "Digital VHS". Released in 1998, It uses the same physical cassette format and recording mechanism as S-VHS, and is capable of recording and displaying both standard-definition and high-definition content. The content data format is in MPEG transport stream, the same data format used for most digital television applications. The format was introduced in 1998.

In a computer file system, a fork is a set of data associated with a file-system object. File systems without forks only allow a single set of data for the contents, while file systems with forks allow multiple such contents. Every non-empty file must have at least one fork, often of default type, and depending on the file system, a file may have one or more other associated forks, which in turn may contain primary data integral to the file, or just metadata. Unlike extended attributes, a similar file system feature which is typically of fixed size, forks can be of variable size, possibly even larger than the file's primary data fork. The size of a file is the sum of the sizes of each fork. 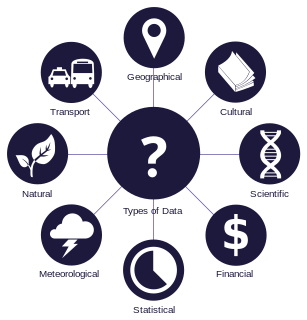 Data is any sequence of one or more symbols given meaning by specific act(s) of interpretation.

In computer data storage, a volume or logical drive is a single accessible storage area with a single file system, typically resident on a single partition of a hard disk. Although a volume might be different from a physical disk drive, it can still be accessed with an operating system's logical interface. However, a volume differs from a partition.

Media Foundation (MF) is a COM-based multimedia framework pipeline and infrastructure platform for digital media in Windows Vista, Windows 7, Windows 8, Windows 8.1 and Windows 10. It is the intended replacement for Microsoft DirectShow, Windows Media SDK, DirectX Media Objects (DMOs) and all other so-called "legacy" multimedia APIs such as Audio Compression Manager (ACM) and Video for Windows (VfW). The existing DirectShow technology is intended to be replaced by Media Foundation step-by-step, starting with a few features. For some time there will be a co-existence of Media Foundation and DirectShow. Media Foundation will not be available for previous Windows versions, including Windows XP.

DVD-Video is a consumer video format used to store digital video on DVD discs. DVD-Video was the dominant consumer home video format in Asia, North America, Europe, and Australia in the 2000s until it was supplanted by the high-definition Blu-ray Disc. Discs using the DVD-Video specification require a DVD drive and an MPEG-2 decoder. Commercial DVD movies are encoded using a combination MPEG-2 compressed video and audio of varying formats. Typically, the data rate for DVD movies ranges from 3 Mbit/s to 9.5 Mbit/s, and the bit rate is usually adaptive. DVD-Video was first available in Japan on November 1, 1996.

In computing, input/output or I/O is the communication between an information processing system, such as a computer, and the outside world, possibly a human or another information processing system. Inputs are the signals or data received by the system and outputs are the signals or data sent from it. The term can also be used as part of an action; to "perform I/O" is to perform an input or output operation.