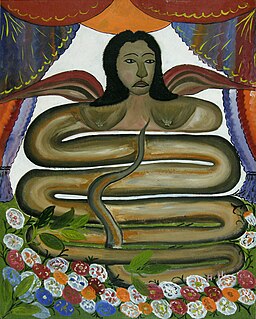 Lwa, also called loa or loi, are spirits in the African diasporic religion of Haitian Vodou. They have also been incorporated into some revivalist forms of Louisiana Voodoo. Many of the lwa derive their identities in part from deities venerated in the traditional religions of West Africa, especially those of the Fon and Yoruba. 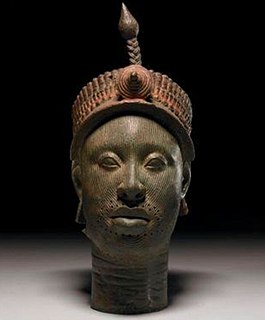 Èṣù is an Òrìṣà/Irúnmọlẹ̀ in the religion of the Yoruba people. Èṣù is a prominent primordial Divinity who descended from Ìkọ̀lé Ọ̀run, and the Chief Enforcer of natural and divine laws - he is the Deity in charge of law enforcement and orderliness. As the religion has spread around the world, the name of this Orisha has varied in different locations, but the beliefs remain similar.

Anansi is an Akan folktale character. He often takes the shape of a spider and is sometimes considered to be a god of all knowledge of stories. Taking the role of trickster, he is also one of the most important characters of West African, African American and Caribbean folklore. Originating in West Africa, these spider tales were transmitted to the Caribbean by way of the transatlantic slave trade. Anansi is best known for his ability to outsmart and triumph over more powerful opponents through his use of cunning, creativity and wit. Despite taking on the role of the trickster, Anansi's actions and parables often carry him as protagonist due to his ability to transform his apparent weaknesses into virtues. He is among several West African tricksters including Br'er Rabbit and Leuk Rabbit. 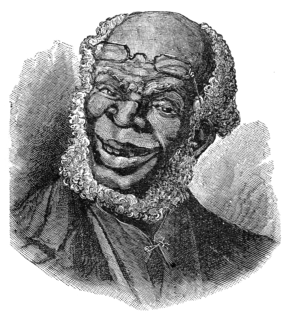 Uncle Remus is the fictional title character and narrator of a collection of African American folktales compiled and adapted by Joel Chandler Harris and published in book form in 1881. Harris was a journalist in post-Reconstruction Atlanta, and he produced seven Uncle Remus books. He wrote these stories to represent the struggle in the Southern United States, and more specifically in the plantations. He did so by introducing tales that he had heard and framing them in the plantation context. He wrote his stories in a dialect which was his interpretation of Deep South African-American language of the time. For these framing and stylistic choices, Harris' collection has endured controversy at the time of its publication. 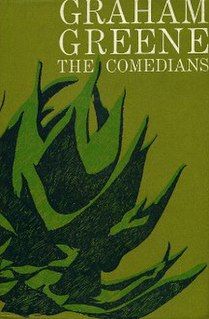 The Comedians (1966) is a novel by Graham Greene. Set in Haiti under the rule of François "Papa Doc" Duvalier and his secret police, the Tontons Macoutes, the novel explores political repression and terrorism through the figure of an English hotel owner, Brown.

Ti' Punch literally meaning "small punch," is a rum-based mixed drink that is especially popular in Martinique, Guadeloupe, Haiti, French Guiana and other French-speaking Caribbean islands. It is very similar to the daiquiri, which is usually identified with Cuba, and the caipirinha, identified with Brazil. A major difference with the daiquiri is that the Ti' Punch contains little lime juice, the lime element is mostly zest. 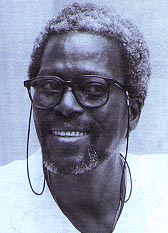 Djibril Diop Mambéty was a Senegalese film director, actor, orator, composer and poet. Though he made only two feature films and five short films, they received international acclaim for their original and experimental cinematic technique and non-linear, unconventional narrative style.

The Kingdom of This World is a novel by Cuban author Alejo Carpentier, published in 1949 in his native Spanish and first translated into English in 1957. A work of historical fiction, it tells the story of Haiti before, during, and after the Haitian Revolution led by Toussaint Louverture, as seen by its central character, Ti Noel, who serves as the novel's connecting thread. Carpentier's work has been influenced by his multi-cultural experience and his passion for the arts, as well as by authors such as Miguel de Cervantes. The novel stems from the author's desire to retrace the roots and history of the New World, and is embedded with what Carpentier calls "lo real maravilloso" or "the marvelous real"—a concept he introduced to the world of literature.

Général Alibée Féry was a Haitian playwright, poet, and storyteller. Born in Jérémie, Féry was largely self-taught. He was the first person to tell stories of Uncle Bouqui and Ti Malice, characters who appear frequently in Haitian folklore.

Haitian cuisine consists of cooking traditions and practices from Haiti. It is a Creole cuisine, that originates from a blend of several culinary styles that populated the western portion of the island of Hispaniola, namely the African, French, indigenous Taíno, Spanish and Arab influence. Haitian cuisine is comparable to that of "criollo" cooking and similar to the rest of the Latin Caribbean, but differs in several ways from its regional counterparts.

Br'er Rabbit is a central figure in an oral tradition passed down by African-Americans of the Southern United States and African descendants in the Caribbean, notably Afro-Bahamians and Turks and Caicos Islanders. He is a trickster who succeeds by his wits rather than by brawn, provoking authority figures and bending social mores as he sees fit. Popularly known adaptations are by Joel Chandler Harris in the 19th century, and later The Walt Disney Company adapted it for its 1946 animated motion picture Song of the South.

An animal tale or beast fable generally consists of a short story or poem in which animals talk. It is a traditional form of allegorical writing. 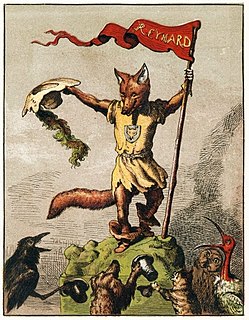 In mythology and the study of folklore and religion, a trickster is a character in a story who exhibits a great degree of intellect or secret knowledge and uses it to play tricks or otherwise disobey normal rules and defy conventional behavior. 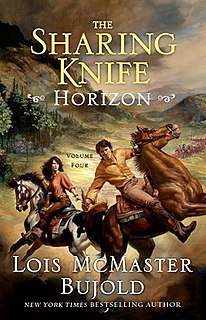 Horizon is a fantasy novel by American writer Lois McMaster Bujold. It is the fourth in the tetralogy The Sharing Knife. 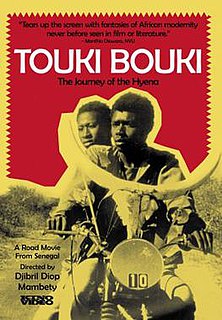 Touki Bouki is a 1973 Senegalese drama film, directed by Djibril Diop Mambéty. It was shown at the 1973 Cannes Film Festival and the 8th Moscow International Film Festival.

Akhu Tönpa is a fictional character portrayed as a trickster in Tibetan folklore. "Akhu" means uncle in Tibetan, but it is also used as a title for older men by younger people.

Les Frères Déjean is a kompa band formed in 1963 under the name Les Frères de Pétion-Ville by its maestro Lyonel Déjean, before being called with current name. It was not until 11 years after the creation of the group for the first album to be recorded. This album will be entitled "Haiti" and will be concentrated of hits. Other albums will follow, however, one of Déjean's milestone is certainly Bouki ac Malice, recorded in 1977 with the songs Débaké and Arrêté.

Bahamian literature is literature written or produced in the Bahamas or by Bahamians.