Baillargau Raymond, known as Ti Roro, was a Haitian drummer known for bringing the artistry of Haitian Vodou ritual drumming and other traditional Afro-Haitian drumming styles to the stage and to recording studios. He was an international performer who influenced jazz musicians, in particular, Max Roach. His year of birth is estimated to be 1915. It is widely believed that he died in 1980, probably in Port-au-Prince. [1]

Ti Roro's performances and collaborations can be found on solo recordings and in work for such artists as orchestra leader Issa El Saieh, singer Guy Durosier, and dancer Jean-Léon Destiné.

The music of Haiti combines a wide range of influences drawn from the many people who have settled on this Caribbean island. It reflects French, African rhythms, Spanish elements and others who have inhabited the island of Hispaniola and minor native Taino influences. Styles of music unique to the nation of Haiti include music derived from rara parading music, twoubadou ballads, mini-jazz rock bands, rasin movement, hip hop Creòle, the wildly popular compas, and méringue as its basic rhythm. Haiti hadn't had a recorded music until 1937 when Jazz Guignard was recorded non-commercially. One of the most popular Haitian artists is Wyclef Jean. His music is somewhat hip-hop mixed with world music. Haitian music is influenced mostly by European colonial ties and African migration. In the case of European colonization, musical influence has derived primarily from the French.

Webert Sicot was a Haitian saxophone player, composer and band leader. He is recognized as one of the creators of compas also known as compas direct, a style of Haitian music born in the 1950s that he named cadence rampa after he left Nemours' band to differentiate himself in 1962 in the spirit of competition. 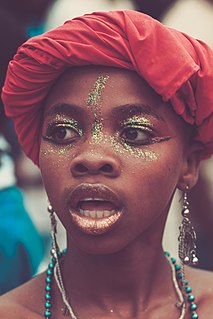 The culture of Haiti is an eclectic mix of African, Taino and European elements due to the French colonization of Saint Domingue and its large and diverse enslaved African population, as is evidenced in the Haitian language, music, and religion.

Compas, is a dance music and modern Méringue of Haiti. The genre was popularized following the creation of Ensemble Aux Callebasses in (1955), which became Ensemble Nemours Jean-Baptiste In 1957. Compas is the main music of many countries such as Dominica and the French Antilles. This méringue style is influential in part of Africa, the Caribbean, Portugal, France, part of Canada, South and North America.

Chouval bwa is a kind of folk music originated on the slave plantations of Martinique. There are two versions, traditional and modern. Chouval bwa has been popularized by artists such as Claude Germany, Tumpak, Dede Saint-Prix, and Pakatak.

Seymour Etienne Bottex was a Haitian painter. Born in Port-Margot, in northern Haiti, Bottex worked as a photographer until 1955 when his older brother Jean-Baptiste encouraged him to begin painting. He joined the Centre d'Art and later the Galerie Issa in Port-au-Prince. His paintings, mingling humorous, historical, and biblical themes, are exhibited worldwide and auctioned at Sotheby's in New York. He is considered one of the finest Haitian naïf painters, and his murals in the Episcopal Cathedral de Sainte Trinité in Port-au-Prince are considered the most important achievement in Haitian modern art.

Mini-jazz is a reduced méringue-compas band format of the mid-1960s characterized by the rock band formula of two guitars, one bass, and drum-conga-cowbell; some use an alto sax or a full horn section, while others use a keyboard, accordion or lead guitar.

Méringue, also called méringue lente or méringue de salon, is a dance music and national symbol in Haiti. It is a string-based style played on the lute, guitar, horn section, piano, and other string instruments unlike the accordion-based merengue, and is generally sung in Haitian Creole and French, as well as in English and Spanish.

A bélé is a folk dance and music from Martinique, St. Lucia, Dominica, Haiti, Grenada, and Guadeloupe. It may be the oldest Creole dance of the creole French West Indian Islands, and it strongly reflects influences from African fertility dances. It is performed most commonly during full moon evenings, or sometimes during funeral wakes. The dance is also popular in Saint Lucia. In Tobago, it is thought to have been performed by women at social events in the planters' great houses, and the dress and dance style copied by the slaves who worked in or around these houses.

"Choucoune" is a 19th-century Haitian song composed by Michel Mauléart Monton with lyrics from a poem by Oswald Durand. It was rewritten with English lyrics in the 20th century as "Yellow Bird". Exotica musician Arthur Lyman made the song a hit in 1961.

A tanbou is the national musical instrument and type of barrel drum from Haiti. The drum is used in many music genres of Haiti and has been influential in the rest of the Caribbean and Latin American world.

Arab Haitians are Haitian citizens of Arab descent. In Haiti, there are a sizable number of Haitians that are either of Middle-Eastern ancestry or who trace their origins to Arab descendants. Hadrami and Levantine Arabic ancestry can be found within the Arab Haitian community known in Arabic as Bilad al-Sham, primarily Lebanon, Syria and Palestine.

Tourism in Haiti is an industry that has generated just under a million arrivals in 2012, and is one of the main sources of revenue for the nation. With its favorable climate, second longest coastline of beaches and most mountainous ranges in the Caribbean, waterfalls, caves, colonial architecture and distinct cultural history, Haiti has had its history as an attractive destination for tourists. However, unstable governments have long contested its history and the country's economic development throughout the 20th century.

Haitian Carnival is a celebration held over several weeks each year leading up to Mardi Gras. Haitian Defile Kanaval is the Haitian Creole name of the main annual Mardi Gras carnival held in Port-au-Prince, Haiti.

Frisner Augustin was a major performer and composer of Haitian Vodou drumming, and the first and only citizen of Haiti to win a National Heritage Fellowship from the National Endowment for the Arts in the United States, where he resided for forty years.

Lina Mathon-Blanchet was an Afro-Haitian pianist, music teacher and composer. First director of the Conservatoire National, she was interested in Haiti's folkloric traditions and was one of the first performers to include Vodou-influenced theatrical performances on the public stage in the country. Founding several folkloric troupes, she led her artists on tours throughout the United States and was noted as a teacher and mentor to many prominent Haitian performers. Trained in classical music traditions she collected traditional songs documenting the lyrics, melodies, and rhythms found as traditional themes in Haitian music. She is widely recognized as one of the most influential figures in the development of music in Haiti in the twentieth-century.