The Tia Maria mine is a large copper deposit located in the south of Peru in the province of Islay, Arequipa Region. The deposit contains an estimated total reserves 711 million tonnes of ore graded at 0.36% copper. [1] The project is operated by Southern Peru Copper Corporation.

In 2011, there were protests against the project which led to the deaths of three people. Concerns about the impact on agriculture led to the project's being put on hold. [2] [3]

A revised Environmental Impact Assessment by Geoservice Ingeniería for Southern Copper Corporation was approved in August 2014. The construction permit is still pending. [4] [5]

A new round of protests began in March 2015, including a march of eight hundred people. Many people were injured, and, by May, three more people have died from protesting. [6] [3] [2] 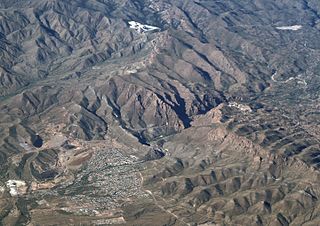 Resolution Copper (RCM) is a joint venture owned by Rio Tinto and BHP Billiton formed to develop and operate an underground copper mine near Superior, Arizona, U.S. The project targets a deep-seated porphyry copper deposit located under the now inactive Magma Mine. Rio Tinto has reported an inferred resource of 1.624 billion tonnes containing 1.47 percent copper and 0.037 percent molybdenum at depths exceeding 1,300 metres (0.81 mi). The proposed mine is one of the largest copper resources in North America. Following the passage of the 2015 National Defense Authorization Act, many Native American and conservation groups fear the copper mine will destroy sacred and environmentally sensitive land.

Mount Toromocho, meaning in Spanish "a bull with no horns", is a mountain in the Junín Region, Peru that sits next to the long established mining camp of Morococha and hosts a large polymetallic metal deposit. It is now owned by the Aluminum Corporation of China (Chinalco), a parent company of Chinalco Mining Corporation International (CMC). Minera Chinalco Perú S.A., a subsidiary of CMC which operates the Toromocho mine, is boosting the mine's productivity with a new production line. 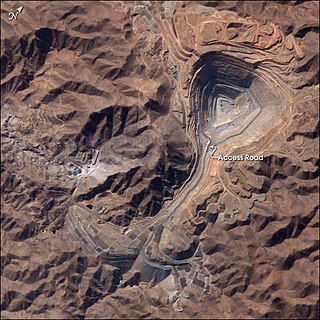 El Teniente is an underground copper mine in the Chilean commune of Machalí in Cachapoal Province, Libertador General Bernardo O'Higgins Region, near the town of Sewell, 2,300 m (7,500 ft) above mean sea level in the Andes.

The Boddington Gold Mine is a gold and copper mine located 13 km (8.1 mi) northwest of Boddington, Western Australia.

Cerro Verde is a Peru-based mining company. Its activities include the extraction, exploitation and production of copper from the porphyry copper deposit located southeast of the city of Arequipa. In addition, the company holds a copper sale agreement with Sumitomo Metal Mining, as well as a molybdenum sale contract with Climax Molybdenum Company.

Minsur is a Peru-based mining company engaged in the extraction, foundation and refining of tin and copper. It is also involved in the exploration for new minerals deposits, with a focus on gold, silver, lead, and zinc ores.

The Toquepala mine is a large porphyry copper mine in the Tacna Province, Tacna Department, Peru. The mine is an open-pit mine producing copper, molybdenum, rhenium and silver with minor gold and zinc.

The Toromocho mine is a large copper mine in the center of Peru, in Junín Region. Toromocho represents one of the largest copper reserve in Peru and in the world having estimated reserves of 1.52 billion tonnes of ore grading 0.48% copper, 0.019% molybdenum and 336 million oz of silver.

The Quellaveco mine is a large copper mine project located in the south of Peru in the Moquegua Region. It is undergoing government environment approvals for its Environmental Impact Assessment. The last EIA modification was submitted in 2014. The Quellaveco mining property is majority–owned by Anglo American. Quellaveco represents one of the largest copper reserves in Peru and in the world, having estimated reserves of 1.1 billion tonnes of ore grading 0.55% copper. The planned development of the mine estimates a processing capacity of 85000 metric tonnes per day. Fluor Corporation has been assigned as the EPCM contractor for this project.

The Cerro Verde mine is a very large copper mine located about 20 miles southwest of Arequipa, in southwestern Peru. Cerro Verde represents one of the largest copper reserves in Peru and in the world, having estimated reserves of 4.63 billion tonnes of ore grading 0.4% copper and 113.2 million oz of silver.

Las Bambas copper mine is a large project located in Apurímac, Peru. It is an open-pit mine located at altitude of about 4000 meters above sea level. It is a polymetallic mine which significant mineral resources and ore reserves of copper with an estimated mine life of at least 20 years. Production at the mine is scheduled to start in 2015 following an 80% confirmation completion of the project on 31 Dec 2014. The first production of concentrate out of the mine is expected to be in the first quarter of 2016.

Miguel De La Torre Sobrevilla is a Peruvian engineer and entrepreneur who founded the engineering and consulting company Geoservice Ingeniería back on 1995, he undertook his undergraduate on Civil Engineering at Universidad Nacional de Ingeniería from 1961 to 1965. He is specialist in dam engineering, foundations, slope stability, geotechnical instrumentation and related activities with geotechnical engineering applied to energy projects, irrigation, transportation and mining nationwide. 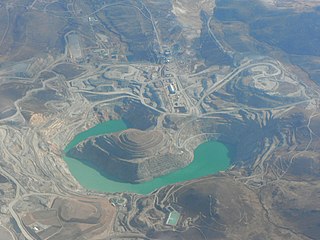 Tintaya is a Peruvian copper mine. It was owned by the Swiss corporation Xstrata. The mine is located in the Cusco Region, Espinar Province, Yauri District, southeast of Yauri. The ore processing rate is at 200,000 tonnes per year and the construction phase of the mine asked for US$1.5 billion investment. Bechtel was hired for feasibility and EPCM for the mine.

Groups of people who do not belong to the communities of the area of direct influence and are even located in distant provinces and regions and do not evidence their intention to enter into a dialogue or have a clear platform of struggle are holding a protest since 25 September. The protests escalated on 29 September, when four people were killed and dozens injured in clashes between demonstrators and police, prompting President Ollanta Humala to decree a state of emergency.