He played in the Cincinnati Reds farm system from 2000-2004, but never moved above Class-A before he was released. He also apparently played in Japan at one point. [1] 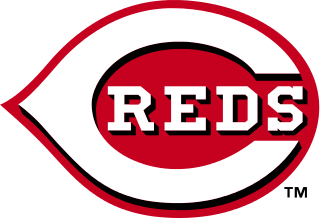 The Cincinnati Reds are an American professional baseball team based in Cincinnati, Ohio. The Reds compete in Major League Baseball (MLB) as a member club of the National League (NL) Central division. They were a charter member of the American Association in 1882 and joined the NL in 1890.

The 2002 Intercontinental Cup was held in Havana, Cuba from November 8 through November 20, 2002. Cuba defeated South Korea 2-1 in the final to win the tournament.

The 2003 Baseball World Cup took place in Cuba from October 12 to 25, 2003. Participating countries were split in two groups, with the first four of each group qualifying for the finals.

Sports in Brazil are those that are widely practiced and popular in the country, as well as others which originated there or have some cultural significance. Brazilians are heavily involved in sports. Association football is the most popular sport in Brazil. Other than football, sports like volleyball, mixed martial arts, basketball, and motor sports, especially Formula One, enjoy high levels of popularity.

Tiago Splitter Beims is a Brazilian former professional basketball player who played seven seasons in the National Basketball Association (NBA). He is currently serving as a pro scout for the Brooklyn Nets. A three-time All-EuroLeague Team selection prior to his NBA career, he became the first Brazilian-born player to win an NBA championship in 2014, as a member of the San Antonio Spurs.

Tiago Jorge Honório or simply Tiago, is a Brazilian football striker, who plays for Independente de Limeira in Brazil.

Tiago Alves Fraga, more commonly known as Tiago is a Brazilian professional footballer who plays as attacking midfielder for CRAC. 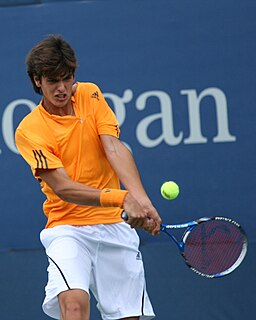 Tiago Fernandes is a former Brazilian tennis player. He achieved the No. 1 ranking on the ITF Junior Circuit. Fernandes was coached by Larri Passos, the former coach of Brazilian former world #1 and three-time French Open winner Gustavo Kuerten.

Tiago full name Tiago dos Santos Roberto is a Brazilian footballer who plays as a forward.

Tiago Galvão da Silva, commonly known as Thiago Galvão is a Brazilian football forward, playing for Chaves. He is most frequently played as either a striker or an attacking midfielder.

Tiago de Melo Marinho, commonly known as Tiago,, is a Brazilian futsal player who plays for Corinthians and the Brazilian national futsal team.

Tiago Felipe Santos da Silva is a Brazilian-Italian professional baseball pitcher with the Generales de Durango of the Mexican League. From 2008 to 2013 he played with the San Marino Baseball Club of the Italian Baseball League (IBL), posting a 41–12 win–loss record, a 2.00 earned run average, and 490 strikeouts.

Carlos Kenji Yoshimura is a Brazilian baseball pitcher. He attended Hakuoh University and has played for the Yamaha team in the Japanese Industrial League. He represented Brazil at the 2003 Pan American Games, 2003 Baseball World Cup and 2013 World Baseball Classic.

Ernesto Noris Chacón is a Cuban baseball pitcher. He played in the Serie Nacional Baseball and then defected to Brazil where he played. He represented Brazil at the 2008 Americas Baseball Cup and the 2013 World Baseball Classic.

Reinaldo Tsuguio Sato (Jiro) is a Brazilian baseball designated hitter. He plays for the Yamaha club in the Japanese Industrial League. He was signed by the Yakult Swallows and played from 1999–2003 when he was released. He has played in the industrial leagues since then. He represented Brazil at the 1999 Pan American Games, 2003 Baseball World Cup, 2005 Baseball World Cup, 2007 Pan American Games, 2008 Olympics qualifying rounds and 2013 World Baseball Classic.