Mattos is part of the new generation of Futurism thinkers. In 2017, he became part of Singularity University's faculty team. He was also a guest teacher at the Transdisciplinary Innovation Program (Hebrew University of Jerusalem) and at the project ‘Futures, Innovation and Strategic Design’ (ISADE/University of Lisbon).

Mattos currently leads Aerolito, a company that explores future scenarios. His main role is to envision post-emergent future possibilities, specially about the future of work and the future of education/learning – which are shared on his books and classes.

Mattos is part of the new generation of Futurism thinkers in Brazil. [7] He collaborates with Singularity University and with The Hebrew University of Jerusalem (Trans-disciplinary Innovation Program). His talks/lectures about the future have been watched by international audiences in South America, Central America, North America, Europe, Mid-East and Oceania. In 2018, he was invited to share his theories at the United Nations, in Geneve (UNCTAD/Youth Forum).

His relationship with Futurism started in 2012, when he was selected, among 80 globally participants, for the GSP12 at the Singularity University, [8] . This project, a partnership between NASA and Google, [9] takes place at the NASA Research Park in Mountain View, California. After being chosen the class speaker, [10] his career achievements were mentioned by Forbes.

In 2014, he spent a few days at MIT studying with Professor Thomas W. Malone, author of The Future of Work.

In 2015, Mattos was selected [11] to attend another international project: the first edition of TIP (Trans-disciplinary Innovation Program), a futurism program held by the Hebrew University of Jerusalem. Among its teachers and speakers, TIP gathered worldwide experts. On its first edition, TIP allowed participants to interact with fourteen Nobel Laureates and one Fields Medal Winner.

After TIP, he spent some time in Palo Alto studying Foresight Techniques at The Institute for the Future.

Since 2013, Mattos has focused his carreer on Futurism, creating theories about the future of work and future of education/learning.

In 2018, he became (for a short period of time) an Época Negócios columnist. In his articles, he brought reflections about Futurism, Innovation and the future of work.

Mattos graduated in Communications at the Pontifical Catholic University of Rio Grande do Sul, Brazil. In 2001, he was granted a scholarship at the Miami Ad School, [12] [13] in the United States.

In 2005, he was elected for the Young Lions [14] and took part, along with fifteen other professionals, in the delegation of young advertisers that participated in the Cannes Lions International Festival of Creativity.

In the following year, he co-founded Perestroika, a school for creative activities. The company, which was initially focused on communication courses, expanded its activities to include several areas, such as innovation, technology, design, entrepreneurship, among others. It also created its own methodology, that is now open source.

Between 2012 and 2014, it started initiatives in five other cities in Brazil, as well as its first international project, in San Francisco, California. In 2015, the school launched Neotribes, its second international venture. In 2016, Neotribes was held in Germany.

As a serial entrepreneur, Mattos has been part of teams that have founded several projects. He is still a partner of some of them, like Aerolito. He was also present in the beginning of initiatives in which he no longer takes part such as Perestroika. Others initiatives no longer exist, such as Pipa (a business accelerator with high positive impact and low environmental impact).

In 2010, Mattos was the opening speaker of TEDx Porto Alegre. [15] He has since been invited to speak on several topics at conferences [16] and Fortune 500 corporate events.

His presentation on exponential technologies (a "Blindfolded ignite", a lecture he gave while blindfolded, defending hug as a technology), generated media repercussion. [17] [18]

His first book, VLEF ("Vai lá e faz", or "Go Do It"), is an entrepreneurship manifesto and brings reflections about how to create a company in the 21st Century. It was 100% made independently and in a decentralised mindset. The project was backed by a crowdfunding website and held a record in Catarse, the biggest crowdfunding platform in Brazil, for some months. [19]

In 2014, Perestroika was among the projects selected to be in the book Empreendedorismo Criativo (Creative Entrepreneurship), which gathered nine Brazilian companies that belong to the New Economics. [20]

His initiatives have been mentioned by international media, such as Forbes and Fast Company. [21] In Brazil, Mattos appeared on the cover [22] of PEGN (Pequenas Empresas Grandes Negócios), UOL TAB and Você S/A Sul . [23] He was also interviewed by ISTOE's red pages, Danilo Gentili’s The Noite and Panico na Jovem Pan. [24]

Marjorie Estiano is a Brazilian actress and singer. She rose to prominence in 2004 playing the role of Natasha in the Rede Globo teen series Malhação.

Ciro Ferreira Gomes, often known monomyously as Ciro, is a Brazilian politician, lawyer, and academic, affiliated with the Democratic Labor Party (PDT). He ran unsuccessfully for the presidency of Brazil three times, in 1998, 2002 and was the PDT's presidential candidate in the 2018 Brazilian election.

Bianca de Carvalho e Silva Rinaldi is a Brazilian actress. She is best known for her roles in telenovelas, especially A Escrava Isaura. 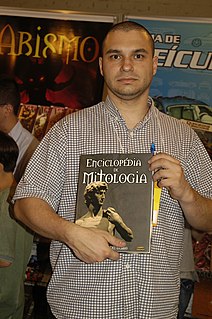 Márcia Goldschmidt-Rothschild is a writer and former Brazilian television presenter.

Sílvia Escobar Pfeifer is a Brazilian actress and former model.

Paraíso Tropical is a Brazilian telenovela that was produced and aired by Rede Globo from 5 March and 28 September 2007, totaling 179 chapters.

Icarius De Menezes born on 20 April 1975, in Curitiba, Brazil, is a Brazilian creative director. He lives and works in Milan.

Marcos Losekann is a Brazilian correspondent who is well known in Brazil for covering important international conflicts and events. He started at RBS TV in Rio Grande do Sul and has not stopped since. He worked in Santa Catarina, Brasilia, Rio de Janeiro and São Paulo before becoming an International Correspondent in 2000. Between 2004 and 2007, he covered Middle East events. Indeed, he recorded several stories about the Israeli–Palestinian conflict from his base of Jerusalem. He returned to Europe to coordinate the Office of Rede Globo in London, where he lived with his wife, Ana Lélia and their children Arthur, Helena and Mariana. Now they live in the capital of Brazil, Brasília.

Corruption in Brazil exists on all levels of society from the top echelons of political power to the smallest municipalities. Operation Car Wash showed central government members using the prerogatives of their public office for rent-seeking activities, ranging from political support to siphoning funds from state-owned corporation for personal gain. Specifically, mensalão typically referred to the practice of transferring taxpayer funds as monthly allowances to members of congress from other political parties in consideration for their support and votes in congress. Politicians used the state-owned and state-run oil company Petrobras to raise hundreds of millions of reais for political campaigns and personal enrichment.

Magno Malta is a Brazilian politician. He has represented Espírito Santo in the Federal Senate since 2003. Previously he was a deputy from Espirito Santo from 1999 to 2003. He is a member of the Party of the Republic.

Alessandro Golombiewski Teixeira is a Brazilian economist. From April to May 2016, he was Brazil´s Minister of Tourism and left after Dilma Rousseff was impeached.

Tereza Helena Gabrielli Barreto Campello is a Brazilian economist graduated from the Federal University of Uberlândia and Doctor in Public Health from FioCruz. She was the minister of Social Development and Fight against Hunger during the government of President Dilma Rousseff. She is international consultant on social development and social protection, Visiting Fellow in the Future Food Beacon of Excellence at University of Nottingham (UK) University of Nottingham (UK) and professor and research associate at the Oswaldo Cruz Foundation

The 2018 presidential campaign of Fernando Haddad for the Presidency of Brazil was announced on 11 September 2018, two weeks after the candidacy of Luiz Inácio Lula da Silva, the former President of Brazil, was denied by the Superior Electoral Court for violating the Ficha Limpa. Haddad, who had been Lula's running mate, replaced him as the candidate and PCdoB state legislator Manuela d'Ávila became Haddad's running mate.

Vilson Pedro Kleinübing was a Brazilian politician who served as Governor of Santa Catarina from 1991 until 1994.

This article documents the impacts of the 2019–20 coronavirus pandemic in Brazil, and may not include all the contemporary major responses and measures.