The 2014 Winter Olympics, officially called the XXII Olympic Winter Games and commonly known as Sochi 2014, was an international winter multi-sport event that was held from 7 to 23 February 2014 in Sochi, Krasnodar Krai, Russia, with opening rounds in certain events held on the eve of the opening ceremony, 6 February 2014. 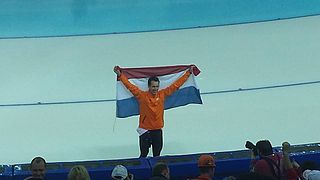 The men's 1500 metres speed skating competition of the 2014 Winter Olympics was held at Adler Arena Skating Center on 15 February 2014.

The ISU Speed Skating World Cup is a series of international speed skating competitions, organised annually by the International Skating Union since the winter of 1985–86. Every year during the winter season, a number of competitions on different distances and on different locations are held. Skaters can earn points at each competition, and the skater who has the most points on a given distance at the end of the series is the winner. Initially not very popular with skaters nor spectators, the World Cup has gradually become more and more popular, and this was due to the creation of the World Single Distance Championships. The results of the separate distances in the World Cup ranking are the main qualifying method for the World Single Distance Championships.

The 2013–14 ISU Speed Skating World Cup, officially the Essent ISU World Cup Speed Skating 2013–2014, was a series of international speed skating competitions that ran the entire season. The season started on 8 November 2013 in Calgary, Alberta, Canada, and concluded with the final on 16 March 2014 in Heerenveen, Netherlands. Compared to previous seasons, there were fewer competition weekends; the season was restricted due to the 2014 Winter Olympics, which were arranged in Sochi, Russia, during February 2014. In total, six competition weekends were held at six different locations, twelve cups were contested, and 72 races took place. 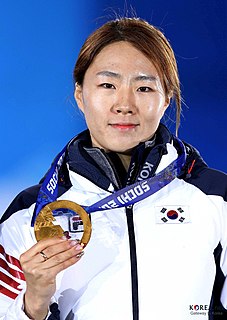 Lee Sang-hwa is a South Korean retired speed skater who specialises in the sprint distances. She is a two-time Olympic champion in 500 metres and the 2010 World Sprint champion. She is the current world record holder in women's 500 metres with the time of 36.36 seconds set in Salt Lake City on 16 November 2013, and also holds the South Korean record on 1000 metres. She has also won three World Championships medals in 500 metres, and has placed in the top three in World Cup events four times in this distance. Her first World Cup victory, however, came on the non-Olympic distance 100 metres. On the 1000 metres, however, she has never placed higher than fifth in international events.

Mu Zhongsheng is a Chinese speed-skater. 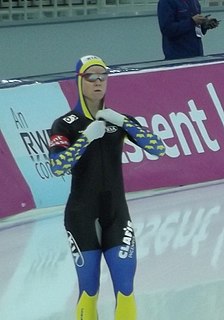 Shane Williamson is an Australian Japanese speed skater who competed at the 2014 Winter Olympics for Japan.