Tiberius Julius Balbillus [1] also known as Julius Balbillus [2] and Aurelius Julius Balbillus [3] (flourished second half of the 2nd century and the first half of the 3rd century) was an Emesene aristocrat from the Emesene dynasty in Roman Syria who served as a priest of the cult of Elagabalus (Latinized Aramaic name for the Syrian Sun God [4] ) in Rome during the reigns of the Severan emperors Septimius Severus (r. 193–211) and Caracalla (r. 211–217). [5]

Little is known on the origins of Balbillus; he was a direct descendant of the king Antiochus I Theos of Commagene [1] and a relation of the Roman empress Julia Domna [6] and her family. According to surviving inscriptions in Rome, Balbillus was a relation to Titus Julius Balbillus, another priest from the cult of Elagabalus in Rome. [7]

Balbillus is known from inscriptions as priest of Elagabalus in Rome during the reigns of Septimius Severus and Caracalla, [2] which are dated before 218. [8] The temple based in Rome devoted to ancient Syrian deities, including Elagabalus was located in Trastevere. [9] A priest in the cult of Elagabalus was called a sacerdos Solis, [10] while Elagabalus's cult was called the Sol Invictus Elagabal. [10]

The priesthood of Balbillus, began at an unknown date before the end of the second century. [8] From inscriptions at the temple reveals, that Balbillus enjoyed imperial favour and established good cordial relations with the Vestal Virgins. [11] Prior to the reign of Elagabalus, Balbillus represented the cult of Elagabalus in Rome. [12] He probably catered the ritual needs connected with the cult of Elagabalus for Septimius Severus and Caracalla, which may have arisen among the Emesene members of the Severan household. [12]

Elagabalus, also called Heliogabalus and officially known as Antoninus, was Roman emperor from 218 to 222, while he was still a teenager. His short reign was conspicuous for sex scandals and religious controversy. A close relative to the Severan dynasty, he came from a prominent Arab family in Emesa (Homs), Syria, where since his early youth he served as head priest of the sun god Elagabal. After the death of his cousin the emperor Caracalla, Elagabalus was raised to the principate at 14 years of age in an army revolt instigated by his grandmother Julia Maesa against Caracalla's short-lived successor, Macrinus. As a private citizen, he was probably named Varius Avitus Bassianus. Upon becoming emperor he took the name Marcus Aurelius Antoninus, and only posthumously became known by the Latinised name of his god.

Lucius Septimius Severus was Roman emperor from 193 to 211. He was born in Leptis Magna in the Roman province of Africa. As a young man he advanced through the customary succession of offices under the reigns of Marcus Aurelius and Commodus. Severus seized power after the death of the emperor Pertinax in 193 during the Year of the Five Emperors. 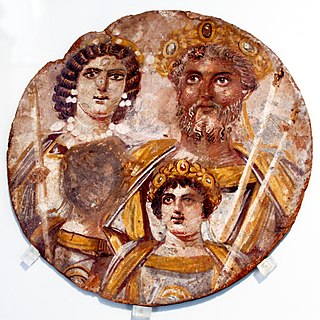 The Severan dynasty was a Roman imperial dynasty that ruled the Roman Empire between 193 and 235, during the Roman imperial period. The dynasty was founded by the emperor Septimius Severus, who rose to power after the Year of the Five Emperors as the victor of the civil war of 193–197, and his wife, Julia Domna. After the short reigns and assassinations of their two sons, Caracalla and Geta, who succeeded their father in the government of the empire, Julia Domna's relatives themselves assumed power by raising Elagabalus and then Severus Alexander to the imperial office.

Sextus Varius Marcellus was a Roman aristocrat and politician from the province of Syria.

Elagabalus, Aelagabalus, Heliogabalus, or simply Elagabal was an Arab-Roman sun god, initially venerated in Emesa, Syria. Although there were many variations of the name, the god was consistently referred to as Elagabalus in Roman coins and inscriptions from AD 218 on, during the reign of emperor Elagabalus. 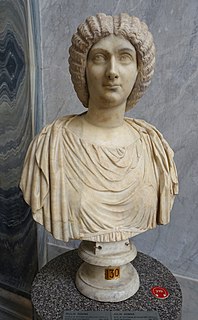 Julia Domna was Roman empress from 193 to 211 as the wife of Emperor Septimius Severus. She was born in Emesa in Roman Syria to an Arab family of priests of the deity Elagabalus. In 187, she married Severus, who at the time was governor of the Roman province of Gallia Lugdunensis. They had two sons, Caracalla and Geta. A civil war over the Roman throne broke out in 193, and shortly afterwards Severus declared himself emperor. The war ended in 197 with the defeat of the last of Severus's opponents. 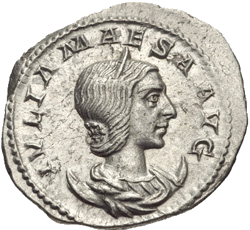 Julia Maesa was a member of the Severan dynasty of the Roman Empire who was the grandmother of emperors Elagabalus and Severus Alexander, elder sister of empress Julia Domna, and mother of Julia Soaemias and Julia Mamaea. She wielded influence during the reigns of her grandsons as Augusta of the Empire from 218 to her death, especially on their elevation to emperors.

Julia Soaemias Bassiana was a Syrian noblewoman and the mother of Roman emperor Elagabalus, who ruled over the Roman Empire from 218 to 222. She was one of his chief advisors, initially with the support and accompaniment of her mother Julia Maesa. She and her mother guided the young emperor until growing unrest and a family division led to her son's replacement by her nephew Severus Alexander. Julia Soaemias was killed along with her son by the Praetorian Guard.

Julia Avita Mamaea or Julia Mamaea was a Syrian noble woman and member of the Severan dynasty. She was the mother of Roman emperor Alexander Severus and remained one of his chief advisors throughout his reign. She was killed in 235 by rebel soldiers along with her son. 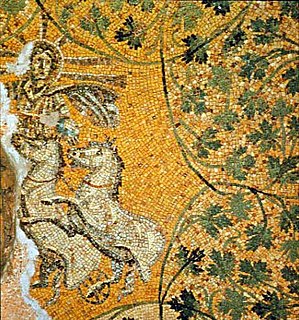 Sol Invictus was long considered to be the official sun god of the later Roman Empire. In recent years, however, the scholarly community has become divided on Sol between traditionalists and a growing group of revisionists.

The Emesenedynasty, also called the Sampsigeramids or the Sampsigerami, were a Roman client dynasty of Arab priest-kings known to have ruled by 46 BC from Arethusa and later from Emesa, Syria, until between 72 and 78/79, or at the latest the reign of Emperor Antoninus Pius (138–161). Iamblichus, the famous Neoplatonist philosopher of the third century, was one of their descendants, as was empress Julia Domna, matriarch of the Severan dynasty. 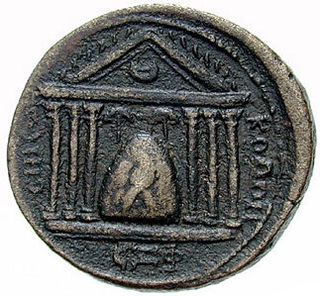 Julius Bassianus was an Arab high priest of Elagabalus at the Temple of the Sun in Emesa, Syria, where this solar deity was worshipped in a shape of a black stone. The name Elagabalus derives from Ilāh and gabal, resulting in "the God of the Mountain," the Emesene manifestation of the deity. Bassianus was a member of the Royal family of Emesa, which was a part of the Arab aristocracy in this client kingdom of the Roman Empire. The beginning of his priesthood is unknown, but by 187 he was a high priest at Emesa. Bassianus was a son of a Julius and his paternal uncle was Julius Agrippa, who served as a Primipilaris.

Gaius Julius Avitus Alexianus was a Syrian nobleman who had an impressive Roman military and political career.

Gaius Julius Sohaemus Philocaesar Philorhomaeus, also known as Sohaemus of Emesa and Sohaemus of Sophene was a prince and a Roman Client Priest King from Syria who lived in the 1st century. He ruled the Emesan kingdom from 54 until 73.

Titus Julius Balbillus was an Emesene aristocrat from the Emesene dynasty in Roman Syria who served as a priest of the cult of Elagabalus in Rome during the reigns of the Severan emperors Septimius Severus and Caracalla.

Marcus Julius Gessius Bassianus was a Magister (master) in the Arval Brethren during the reign of Roman emperor Caracalla who ruled from 212 until 217.