Tibial dyschondroplasia (TD) is a metabolic disease of young poultry that affects the growth of bone and cartilage. Often occurs in broilers (chickens raised for meat) and other poultry which have been bred for fast growth rates. The tibial cartilage does not mature enough to ossify (turn into bone). This leaves the growth plate prone to fracture, infection, and deformed bone development. [1]

It is the leading cause of lameness, mortality, and carcass condemnations in commercial poultry. [2]

Poultry, the domesticated of superorder Galloanserae (fowl), are domesticated birds kept by humans for their eggs, their meat or their feathers. These birds are most typically members of the superorder Galloanserae (fowl), especially the order Galliformes. The term also includes birds that are killed for their meat, such as the young of pigeons but does not include similar wild birds hunted for sport or food and known as game. The word "poultry" comes from the French/Norman word poule, itself derived from the Latin word pullus, which means small animal. 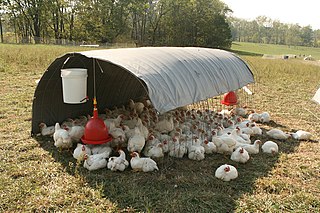 Pastured poultry is a sustainable agriculture technique that calls for the raising of laying chickens, meat chickens (broilers), and/or turkeys on pasture, as opposed to indoor confinement. Humane treatment and the perceived health benefits of pastured poultry are causing an increase in demand for such products.

A broiler is any chicken that is bred and raised specifically for meat production. Most commercial broilers reach slaughter weight between four and seven weeks of age, although slower growing breeds reach slaughter weight at approximately 14 weeks of age. Typical broilers have white feathers and yellowish skin. Broiler or sometimes broiler-fryer is also used sometimes to refer specifically to younger chickens under 4.5 pounds, as compared with the larger roasters.

Osteochondrosis is a family of orthopedic diseases of the joint that occur in children, adolescents and other rapidly growing animals, particularly pigs, horses, dogs, and broiler chickens. They are characterized by interruption of the blood supply of a bone, in particular to the epiphysis, followed by localized bony necrosis, and later, regrowth of the bone. This disorder is defined as a focal disturbance of endochondral ossification and is regarded as having a multifactorial cause, so no one thing accounts for all aspects of this disease.

Hock burns are marks found on the upper joints of chickens and other birds raised on broiler farms. These marks are where the ammonia from the waste of other birds has burned through the skin of the leg, leaving a mark. Many meat processors now remove these marks as they discourage customers. Hock burn normally does not surpass 15% of a flock, according to poultry industry standards, but independent studies have found incidents of hock burn more common. Researchers in Britain found that hock burn could be identified in 82% of chickens sold in supermarkets. 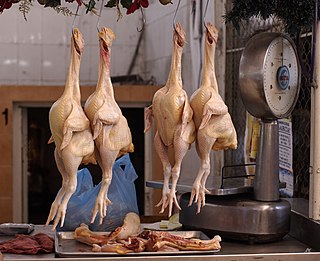 Chicken is the most common type of poultry in the world. Owing to the relative ease and low cost of raising them in comparison to animals such as cattle or hogs, chickens have become prevalent in numerous cuisines. 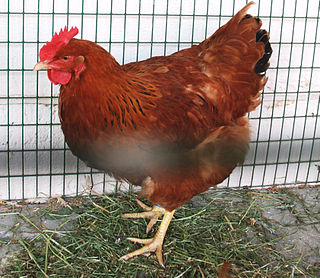 The New Hampshire breed of chicken originated in the state of New Hampshire in the United States. Poultry farmers, starting with Rhode Island Reds and performing generation after generation of selective breeding, intensified the characteristics of early maturity, rapid full feathering, and production of large brown eggs. The mature birds are a rich chestnut red, of a somewhat lighter and more even shade than the Rhode Island Reds. The chicks are also a lighter red. 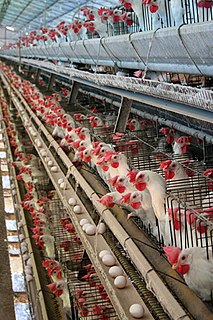 Poultry farming is the form of animal husbandry which raises domesticated birds such as chickens, ducks, turkeys and geese to produce meat or eggs for food. It has originated from the agricultural era. Poultry – mostly chickens – are farmed in great numbers. More than 60 billion chickens are killed for consumption annually. Chickens raised for eggs are known as layers, while chickens raised for meat are called broilers.

Chelates [kee-leyt] in animal feed are organic forms of essential trace minerals such as copper, iron, manganese and zinc. 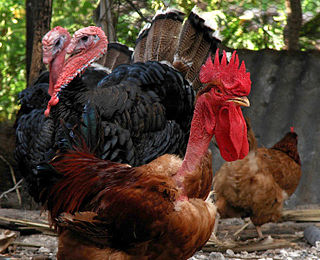 The Naked Neck is a breed of chicken that is naturally devoid of feathers on its neck and vent. The breed is also called the Transylvanian Naked Neck, as well as the Turken. Originally from Transylvania - Romania, and was largely developed in Germany. The name "Turken" arose from the mistaken idea that the bird was a hybrid of a chicken and the domestic turkey. Naked Necks are fairly common in Europe today, but are rare in North America and very common in South America. The trait for a naked neck is a dominant one controlled by one gene and is fairly easy to introduce into other breeds, however these are hybrids rather than true Naked Necks, which is a breed recognized by the American Poultry Association since 1965, it was introduced in Britain in the 1920s. There are other breeds of naked necked chicken, such as the French naked neck, which is often confused with the Transylvanian, and the naked necked gamefowl.

Alfacalcidol is an analogue of vitamin D used for supplementation in humans and as a poultry feed additive. 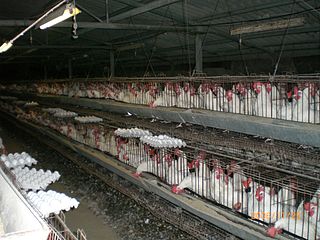 Poultry farming is a part of the United States's agricultural economy.

Skylark Foods Limited is a subsidiary of Skylark Group, an Indian company that specialises in chicken and meat processing, and poultry products for poultry usage. It holds the same position in North India as Venky's holds in South India.

Ayam Pelung or Pelung Chicken is a poultry breed from Cianjur, Indonesia. The males (roosters) are considered to be "singing chickens", with contests being frequent in the Pelung area for the most melodious crowing. A full grown male may weigh 5-6 kg and stand up to 50 cm tall.

Dwarfism in chickens is an inherited condition found in chickens consisting of a significant delayed growth, resulting in adult individuals with a distinctive small size in comparison with normal specimens of the same breed or population. 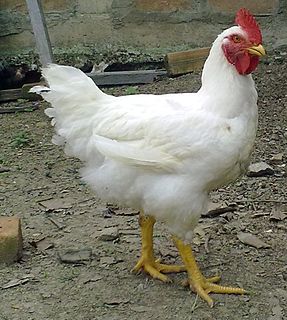 Suguna Foods Private Limited is a billion-dollar Indian multinational food products company headquartered in Coimbatore, India. The company was started in 1984 and is involved in broiler farming, hatcheries, feed mills, processing plants, and vaccines manufacturing for poultry. It markets and exports broiler chicken, frozen chicken, chicken eggs, and is the largest poultry company in India.