Tick or ticking may also refer to:

Action may refer to:

Agent may refer to:

Nox may refer to:

The Tick is a monster superhero created by cartoonist Ben Edlund in 1986 as a newsletter mascot for the New England Comics chain of Boston area comic book stores. The character is a parody of American comic book superheroes.

Guardian may refer to:

A shadow is a region of darkness where light is blocked.

A mask is a covering worn on the face.

Dark Angel may refer to:

A hero is a person who performs extraordinary deeds for the benefit of others.

Controller may refer to:

A prototype is something that is representative of a category of things, or an early engineering version of something to be tested.

Freak has several meanings: a person who is physically deformed or suffers from an extraordinary disease and condition, a genetic mutation in a plant or animal, etc. 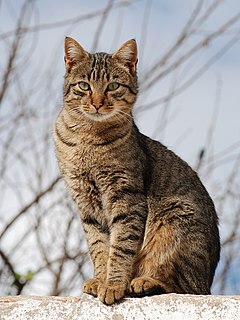 A tabby is any domestic cat with an 'M' on its forehead, stripes by its eyes and across its cheeks, along its back, and around its legs and tail, and, differing by tabby type, characteristic striped, dotted, lined, flecked, banded or swirled patterns on the body—neck, shoulders, sides, flanks, chest and tummy. Tabby is not a breed of cat but a coat type seen in almost all genetic lines of domestic cats, regardless of status. The tabby pattern is found in many official cat breeds and is a hallmark of the landrace extremely common among the general population of cats across the world. The tabby pattern is naturally occurring and is connected to the coat of the domestic cat's direct ancestor and close relatives, the African wildcat, the European wildcat and the Asiatic wildcat, all of which have similar coats, both by pattern and coloration. A genetic study of tabbies found five genetic clusters to be ancestral to cats of various parts of the world.

King Arthur is a legendary king of the Britons.

A brigade is a military unit.

Beast or Beasts may refer to:

Boing may refer to: