Ticket-in, ticket-out (TITO) is a technology used in more modern slot machines. It was originally developed circa 1992 by MGM Corporation who purchased technology from a Las Vegas firm Five Star Solutions as well as barcode ticket printing technology from Jon Yarbrough before his VGT success. They also worked with Pat Greene an inventor in Boston of Triad Company who held a patent on a Bill Validator which could read bar coded tickets as well as accept cash. MGM created a consortium of game manufacturers and developed a protocol for its custom Universal Interface Board "UIB" based on a derivative of Bally Gaming's SDS System. They contracted local firm Applied Computer Technology, Inc. to develop the UIB, its firmware, and also facilitate the organization of the consortium. Later IGT acquired the rights to the TITO patents from MGM and began to modify their own protocol called SAS to implement TITO. It is incorrectly maintained that IGT developed TITO and Bally's Easy Pay which came out many years later. [1]

Ticket-in, ticket out (TITO) machines are used in casino slot machines to print out a slip of paper with a barcode indicating the amount of money represented. These can in turn be redeemed for cash at an automated kiosk. [2] The machines utilize a barcode scanner built into the bill acceptor, a thermal ticket printer in place of a coin hopper (some rare machines are set up to pay with coins if the payout is less than the payout limit, and to print a ticket in situations where a handpay would normally be required) and a network interface to communicate with a central system that tracks tickets.

MGM was in the middle of construction of its major hotel in Las Vegas and invited several gaming machine manufacturers to join a consortium for its Cashless Casino experiment. In the group were Bally Gaming, IGT, Sigma Games, Universal and several others. They were all presented with the MGM UIB Protocol documents and were aided in the realization of the protocol on their gaming platforms. The first trial of the system was actually at the Desert Inn property. MGM Had situated several trailers in the parking lot where the manufacturers could bring their gaming devices for test before being installed on the Field Trial at the Desert Inn.

Completion of the IGT Field Trial in Nevada

On September 29, 2000 IGT announced that its EZ Pay Ticket System successfully completed a field trial at the Fiesta Hotel & Casino in Las Vegas, which resulted in formal written approval from the Nevada Gaming Control Board for installation throughout Nevada 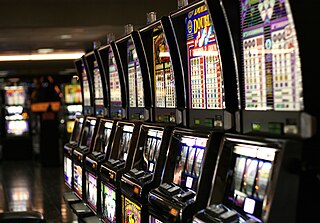 Video poker is a casino game based on five-card draw poker. It is played on a computerized console similar in size to a slot machine. 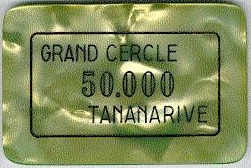 Bally Technologies, Inc., is an American manufacturer of slot machines and other gambling technology based in Enterprise, Nevada. It is owned by Scientific Games Corporation.

The Las Vegas Monorail is a 3.9-mile (6.3 km) automated monorail mass transit system located adjacent to the Las Vegas Strip, in Clark County, Nevada, United States. It connects several large casinos in the unincorporated communities of Paradise and Winchester, and does not enter the City of Las Vegas. It was privately owned and operated by the Las Vegas Monorail Company until their 2020 bankruptcy when it was sold to the Las Vegas Convention and Visitors Authority, a local government agency. In 2013, total annual ridership was roughly 4.2 million, down from a pre-Great Recession peak of 7.9 million in 2007. The monorail is a registered not-for-profit corporation, allowed under Nevada law since the monorail provides a public service. The State of Nevada assisted in bond financing, but no public money was used in construction.

Ronald Dale Harris is a computer programmer who worked for the Nevada Gaming Control Board in the early 1990s and was responsible for finding flaws and gaffes in software that runs computerized casino games. Harris took advantage of his expertise, reputation and access to source code to illegally modify certain slot machines to pay out large sums of money when a specific sequence and number of coins were inserted. From 1993 to 1995, Harris and an accomplice stole thousands of dollars from Las Vegas casinos, accomplishing one of the most successful and undetected scams in casino history. 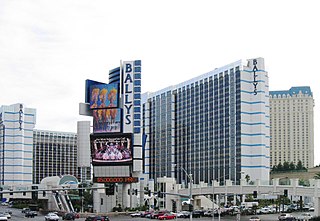 Bally's Las Vegas is a casino hotel on the Las Vegas Strip in Paradise, Nevada. It is owned and operated by Caesars Entertainment. It originally opened as the MGM Grand Hotel on December 4, 1973. The 26-story hotel contained 2,100 rooms, and was among the world's largest hotels.

A hand pay is a condition where a slot machine cannot pay the patron in the typical manner, requiring the casino staff to pay the customer out manually.

A video lottery terminal (VLT), also sometimes known as a video gaming terminal, video slots, or the video lottery, is a type of electronic gambling machine. They are typically operated by a region's lottery, and situated at licensed establishments such as bars and restaurants.

International Game Technology (IGT) was an American gaming company based in Las Vegas that manufactured and distributed slot machines and other gaming technology. It was acquired in 2015 by Gtech, which then adopted the IGT name for itself. 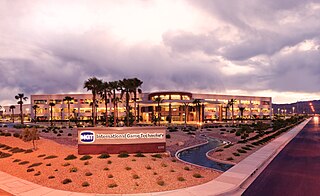 International Game Technology PLC (IGT), formerly Gtech S.p.A. and Lottomatica S.p.A., is a multinational gambling company that produces slot machines and other gambling technology. The company is headquartered in London, with major offices in Rome, Providence, Rhode Island, and Las Vegas. It is controlled, with a 51 percent stake, by De Agostini.

Grand Sierra Resort is a hotel and casino located approximately three miles east of Downtown Reno, Nevada. The hotel has 1,990 guest rooms and suites, 12 restaurants, including Charlie Palmer Steak by celebrity chef Charlie Palmer, and a casino with 80,000 sq ft of space. GSR has a movie theater, a Race & Sports Book, nightclubs including LEX Nightclub, a 25,000 sq ft venue with a swimming pool, lake golf driving range, a two screen cinema, an RV park and a recently opened ice rink. It is owned and operated by Southern California based investment group headed by The Meruelo Group.

Most forms of gambling in Japan are generally banned by the Criminal Code chapter 23; however, there are several exceptions, including betting on horse racing and certain motor sports.

Bally Manufacturing, later renamed Bally Entertainment, was an American company that began as a pinball and slot machine manufacturer, and later expanded into casinos, video games, health clubs, and theme parks. It was acquired by Hilton Hotels in 1996. Its brand name, and mid-20th century pinball & slot machine logo, are still used by several businesses with some trademark rights, most notably Bally Technologies and Bally's Corporation.

Slot machine terminology, characteristics and regulations vary around the world.

SHFL entertainment, Inc. was a manufacturer of shuffling machines, table games, slot machines, and other casino products, based in Paradise, Nevada. Founded in 1983, it was acquired by Bally Technologies in 2013. The company designed Deck Mate, one of the primary card shuffling devices used in casinos.

Sodak Gaming, Inc. was a gaming company based in Rapid City, South Dakota that distributed slot machines to Indian casinos and financed casino projects. It was acquired by International Game Technology (IGT) in 1999 for $230 million.