Tiddy Mun was a legendary bog spirit in England, who was believed to have the ability to control the waters and mists of The Fens of South Lincolnshire, The Carrs of North Lincolnshire and fens of the Isle of Ely. [1]

The belief in Tiddy Mun was first documented in June 1891 in an article by M. C. Balfour in the Folklore Society journal Folk-Lore. In the article she recalls a story, collected in the Ancholme Valley, told to her by an older person who spoke of a curse of pestilence that had been cast upon his village by the Tiddy Mun, who was angered at the draining of the Fens by the Dutch, led by Cornelius Vermuyden, in the seventeenth century. According to the story the Tiddy Mun was eventually placated after the villagers gathered at twilight at the time of the new moon, poured buckets of water into the dyke and apologised for the damage caused.

He was not exclusively malevolent; if the Fens flooded and the waters reached the villages, people would go out at night and call Tiddy Mun wi'out a name, tha watters thruff! ("Tiddy Mun without a name, the water's through! [2] ") until they heard the cry of a peewit, and the next morning the waters would have receded. [3]

In his 1987 Folklore paper "Tiddy Mun's Curse and the Ecological Consequences of Land Reclamation", Darwin Horn argues that all but one of Tiddy Mun's specific curses may be connected to misfortune and disease brought about by the effect of draining the fenland. [4]

The Tiddy Mun was described, by folklorist M.C. Balfour in 1891, as being no bigger than a three-year-old child, but looking like an old man with long, tangled white hair and a matted white beard. He is said to have worn a grey gown so that at dusk he was difficult to see. His laughter was said to resemble the call of the peewit. [3]

Writing in 1955, folklorist E. H. Rudkin also records another Ancholme Valley belief of an imp-like race of beings who were generally considered mischievous but benevolent. They were 'called the Tiddy people', but also the Strangers, Greencoaties and Yarthkins. The 'Tiddy' name related to their size and Rudkin quotes a source describing them: 'They be tiddy critturs, no more than a span high, wi' arms an' legs as thin as thread, but great big feet an' hands, an' heads rollin' aboot on their shoulders'. [5]

The Tiddy people would dance, by moonlight, on large flat stones, known as Strangers Stones, found in the area. Rudkin records a local tradition of smearing the stones with blood and lighting fires on them, but was unable to determine a meaning, or specific belief, behind the practice. [5] The first of the crops would also be left on the Strangers Stones, as well as bread and salt, to keep the Tiddy people happy and ensure a good harvest. [5]

In 2022 the upgraded bridge on the A47 at Guyhirn was officially opened and named Tiddy Mun bridge. A competition to name was bridge was won by 13 year-old Ava McCulloch. [6]

A boggart is a creature in English folklore, either a household spirit or a malevolent genius loci inhabiting fields, marshes, or other topographical features. Other names of this group include bug, bugbear, bugaboo or bug-a-boo, bogey, bogun, bogeyman, bogle, etc., presumably all derived from Old English pūcel, and related to the Irish púca and the pwca or bwga of Welsh mythology.

The River Ancholme is a river in Lincolnshire, England, and a tributary of the Humber. It rises at Ancholme Head, a spring just north of the village of Ingham and immediately west of the Roman Road, Ermine Street. It flows east and then north to Bishopbridge, where it is joined by the Rase. North of Bishopbridge it flows through the market town of Brigg before draining into the Humber at South Ferriby. It drains a significant part of northern Lincolnshire between the Trent and the North Sea. 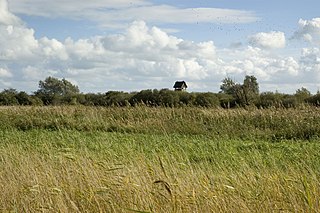 The Fens, also known as the Fenlands, in eastern England is a naturally marshy region supporting a rich ecology and numerous species. Most of the fens were drained centuries ago, resulting in a flat, dry, low-lying agricultural region supported by a system of drainage channels and man-made rivers and automated pumping stations. There have been unintended consequences to this reclamation, as the land level has continued to sink and the dykes have been built higher to protect it from flooding.

English folklore consists of the myths and legends of England, including the English region's mythical creatures, traditional recipes, urban legends, proverbs, superstitions, and folktales. Its cultural history is rooted in Celtic, Christian, and Germanic folklore. 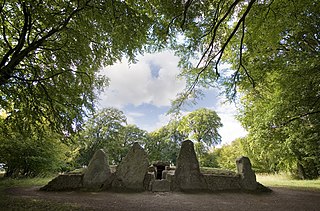 Wayland's Smithy is an Early Neolithic chambered long barrow located near the village of Ashbury in the south-central English county of Oxfordshire. The barrow is believed to have been constructed about 3600 BC by pastoral communities shortly after the introduction of agriculture to the British Isles from continental Europe. Although part of an architectural tradition of long barrow building that was widespread across Neolithic Europe, Wayland's Smithy belongs to a localised regional variant of barrows - found only in south-west of Britain - known as the Severn-Cotswold group. Wayland's Smithy is one of the best surviving examples of this type of barrow.

Irish folklore refers to the folktales, balladry, music, dance, and so forth, ultimately, all of folk culture.

Saint Guthlac of Crowland was a Christian hermit and saint from Lincolnshire in England. He is particularly venerated in the Fens of eastern England.

Fakelore or pseudo-folklore is inauthentic, manufactured folklore presented as if it were genuinely traditional. The term can refer to new stories or songs made up, or to folklore that is reworked and modified for modern tastes. The element of misrepresentation is central; artists who draw on traditional stories in their work are not producing fakelore unless they claim that their creations are real folklore. Over the last several decades the term has generally fallen out of favor in folklore studies because it places an emphasis on origin instead of ongoing practice to determine authenticity.

Iona Margaret Balfour Opie, and Peter Mason Opie were an English married team of folklorists who applied modern techniques to understanding children's literature and play, in studies such as The Oxford Dictionary of Nursery Rhymes (1951) and The Lore and Language of Schoolchildren (1959). They were also noted anthologists, assembled large collections of children's literature, toys, and games and were regarded as world-famous authorities on children's lore and customs.

Yallery Brown is a mischievous fairy-like nature spirit in an old Lincolnshire folk tale from England, which itself is usually named after the creature.

William Crooke was a British orientalist and a key figure in the study and documentation of Anglo-Indian folklore. He was born in County Cork, Ireland, and was educated at Erasmus Smith's Tipperary Grammar School and Trinity College, Dublin. 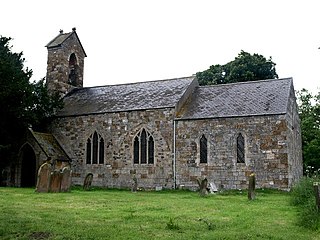 Fulstow is a marsh village and civil parish in the East Lindsey district of Lincolnshire, England. It is situated 6 miles (10 km) north of Louth and 8 miles (13 km) south of Grimsby.

Mary MacLeod Banks was a folklorist, born Mary MacLeod McConnel in Scotland. She was president of the Folklore Society from 1937 to 1939. 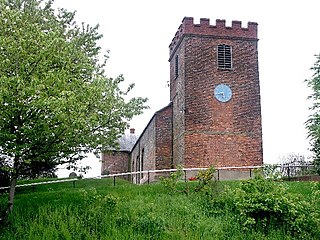 Toynton All Saints is a village and civil parish in the East Lindsey district of Lincolnshire, England, about 1.5 miles (2.4 km) south of the town of Spilsby. 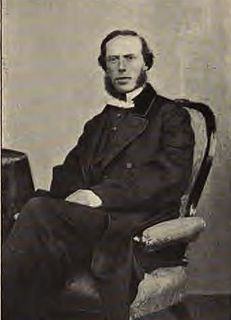 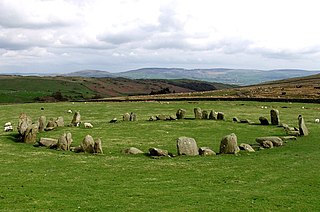 The countless stones is a motif that appears in English and Welsh folklore. It is associated with various megalithic monuments, including chambered long barrows from the Early Neolithic and the stones circles of the Late Neolithic and Early Bronze Age. The motif holds that an individual attempting to count the number of stones in the monument will be unable to do so. 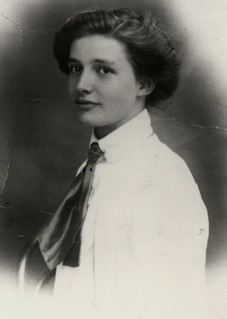 Ethel Rudkin was an English writer, historian, archaeologist and folklorist from Lincolnshire. She pioneered the collection of folk material, particularly from Lincolnshire, and her collections are now part of several public institutions, including the North Lincolnshire Museum.