The Tidewater Transportation District Commission was formed in January 1973.

The formation began with the acquisition of the Virginia Transit Company, Norfolk Division (January 1973), the Community Motor Bus of Portsmouth (May 1975) and the Norfolk, Portsmouth and Elizabeth Tunnel operators in September 1977.

The formation of the Tidewater Regional Transit (TRT) became complete in September 1977.

In 1999, TRT merged with PENTRAN and became Hampton Roads Transit.

The Norfolk Tides are a professional minor league baseball team in the Triple-A International League. They play at Harbor Park in Norfolk, Virginia. Since 2007 they have been a farm team of the Baltimore Orioles; prior to that, they had a 38-year affiliation with the New York Mets.

Portsmouth is an independent city in the Commonwealth of Virginia. As of the 2010 census, the population was 95,535. It is part of the Hampton Roads metropolitan area.

TRT may refer to:

HMS Arethusa was a Leander-class frigate of the Royal Navy. She was, like the rest of the Leanders, named after a figure of mythology. Arethusa was built by J.S. White & Company Shipbuilders of Cowes, launched on 5 November 1963 and commissioned on 24 November 1965.

USS Portsmouth (SSN-707), a Los Angeles-class submarine, was the fourth ship of the United States Navy to be named for Portsmouth, New Hampshire. The contract to build her was awarded to the Electric Boat Division of General Dynamics Corporation in Groton, Connecticut on 10 December 1973 and her keel was laid down on 8 May 1980. She was launched on 18 September 1982 sponsored by Mrs. Helen Poe Goodrich, and commissioned on 1 October 1983, with Commander Donald M. Olson in command. The ceremony took place at the Portsmouth Naval Shipyard in Kittery, Maine, just East of Portsmouth, New Hampshire, her namesake city.

Tidewater Community College, also known as "TCC," is a two-year higher education institution in South Hampton Roads with campuses in Chesapeake, Norfolk, Portsmouth, Suffolk and Virginia Beach. It is accredited by the Southern Association of Colleges and Schools Commission on Colleges to award the associate degree; among two-year institutions in the U.S., it is the 19th largest associate degree producer.

State Route 337 is a primary state highway in the South Hampton Roads area of the U.S. state of Virginia. It runs east from Suffolk to Portsmouth, where it crosses Jordan Bridge. It continues on the east side of the Southern Branch Elizabeth River in the South Norfolk neighborhood of Chesapeake. There it turns north, through Norfolk, crossing the Berkley Bridge into downtown, and ending at the Naval Station Norfolk at Sewell's Point. Most of its length was formed when other highways were rerouted: U.S. Route 460 from Suffolk to South Norfolk, SR 170 from South Norfolk to downtown Norfolk, and US 17 from downtown Norfolk to Sewell's Point. SR 337 is the only numbered highway to cross all three Branches of the Elizabeth River. It crosses the Western Branch as Portsmouth Boulevard at the Hodges Ferry Bridge, the Southern Branch on the Jordan Bridge, and the Eastern Branch on the Berkley Bridge. The Berkley Bridge is a drawbridge. SR 337 also crosses the Lafayette River in the city of Norfolk.

USS New (DD/DDE-818) was a Gearing-class destroyer of the United States Navy, named for United States Marine Corps Private First Class John D. New (1924–1944), who was posthumously awarded the Medal of Honor for "selfless conduct" in the Battle of Peleliu. 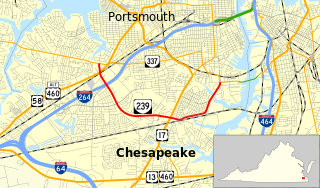 State Route 239 is a primary state highway in the U.S. state of Virginia. Known as Victory Boulevard, the state highway runs 4.46 miles (7.18 km) between intersections with SR 337 in the independent city of Portsmouth. SR 239 connects U.S. Route 58 and Interstate 264 (I-264) in the western part of Portsmouth with US 17 in the southern part of the city.

The Virginia Wings were a professional ice hockey team based in Norfolk, Virginia of the greater Hampton Roads area. They were an affiliated farm team of the Detroit Red Wings, and a member of the American Hockey League for three seasons from 1972–73 to 1974–75. The Wings were previously known as the Tidewater Wings for the 1971–72 season. Their cross-state rivals in the AHL were the Richmond Robins.

Located in the southeastern corner of the state, Norfolk is economically and culturally important to Virginia. A variety of transportation modes have developed around the city's importance and somewhat unusual geography.

Lillie Louise Boone Lucas is a Democratic member of the Senate of Virginia, representing the 18th District since 1992.

The Tidewater Sharks were a minor league professional ice hockey team, based in Norfolk, Virginia, and members of the Southern Hockey League from 1975 to 1977. The Sharks played home games at the Norfolk Scope, and shared the Hampton Roads area with the Hampton Gulls. The ownership group led by Dick Davis, also operated the Tidewater Tides baseball team. The Sharks ceased operations in January on 1977, during the second season of play.

Gordon Franklin Marsh was a Virginia State Senator from Tidewater Virginia in the 1950s and 60s. 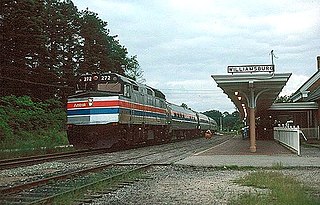