Tidiane is a masculine given name. Notable people with the name include:

Ahmed Tidiane Souaré is a Guinean political figure who was the Prime Minister of Guinea from May 2008 to December 2008, when he was replaced by Kabine Komara following a military coup d'état.

Cheick Tidiane Seck is a Malian musician, arranger and composer. He has written for and played with world-famous African and jazz bands as well as musician Damon Albarn.

Cellou Dalein Diallo is a Guinean economist and politician who was Prime Minister of Guinea from 2004 to 2006. Previously he held a succession of ministerial posts in the government from 1996 to 2004. Currently he is President of the Union of Democratic Forces of Guinea (UFDG), an opposition party.

Sane may refer to:

Sané is a surname. Notable persons with this surname include:

The Union for the Progress of Guinea is an opposition political party in Guinea. In the parliamentary election held on 30 June 2002, the party won 4.1% of the popular vote and 3 out of 114 seats.

The Rally of the Guinean People is a political party in Guinea. The RPG is the current ruling party in the country and is led by Alpha Condé. It is mainly based amongst the Mandinka population.

Amadou is the Francophonic-orthography variant of the Islamic name Ahmad, commonly used in West Africa. Amadou is interchangeable with the forms Ahmadu or Amadu in non-Francophone African countries.

Cheick Tidiane N'Diaye is a Senegalese football player, who currently plays for Sedan in Championnat National.

Sekou, also spelled Sékou or Seku, is a given name from the Fula language. It is equivalent to the Arabic Sheikh. People with this name include:

Sékou Tidiane Souaré is an Ivorian footballer, who currently plays for B36 Tórshavn as a defensive midfielder.

Moussa Bamba is an Ivorian footballer who plays for SC Bacău.

Dramane Kamaté is a professional footballer who currently plays for Andorra CF in the Spanish Third Division Group 17.

Tidiane Dia is a Senegalese footballer. 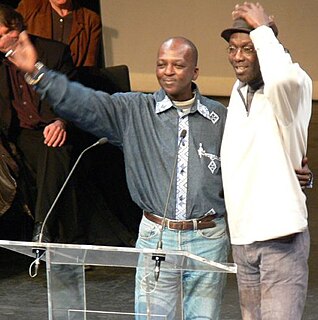 Touré Kunda is a Senegalese band noted for their musical versatility and political activism. Their 36-year career encompasses recordings in over six languages and collaborations with well-known musicians such as Carlos Santana and Talking Heads. They have had considerable success in Africa and Europe and are active in social causes such as Children's rights and advocates for the homeless.

Tall is a surname. Notable people with the surname include:

Pape N'Diaye Souaré is a Senegalese professional footballer who plays as a left back for Premier League club Crystal Palace.

Sarr is a Senegalese and Gambian surname common among the Serer people of West Africa, and their descendants. The name Sarr may refer to:

Dia is surname and given name.

Pape is a given name. Notable people with the name include: