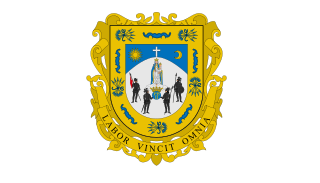 Tangamandapio is a municipality located in the northwest part of the Mexican state of Michoacán, WSW of Zamora, Michoacán, 165 km from the state capital of Morelia. The geographic coordinates are: 19° 57' North latitude and 102° 26' West longitude. The original name is Santiago Tangamandapio. 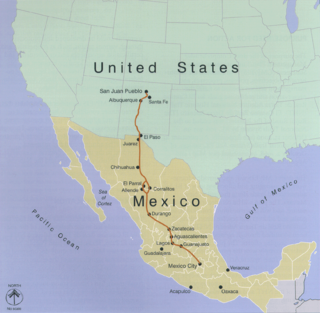 El Nayar is a municipality in the Mexican state of Nayarit. The population was 30,551 in 2005 in a total area of 5,100 km². The municipal seat of Jesús María had a population of 1,520 in 2005. El Nayar is the home of the Huichol, Cora, and the Tepehuán Indians have adapted El Nayar.

Tayahua is a small provincial town in the central Mexican state of Zacatecas. The town has less than 12,000 inhabitants. Tayahua is a municipality of the city Villanueva. It is located West of Villanueva and East of the City Tabasco. This town was once inhabited by the famous actor/singer Antonio Aguilar before he built his own ranch "El Soyate" approximately 30 km (19 mi) east of Tayahua off the main highway road. Antonio Aguilar and family once lived in La Hacienda by the Catholic Church in Tayahua.

Ojocaliente is a medium-sized town in the southeastern part of the Mexican state of Zacatecas. The town was founded in 1620; its first name was "Real Villa de Sacramento y Ojocaliente Mina de Bastidas." The name of Ojocaliente derives from its hot springs and mineral veins that were exploited in the hills of Santiago. 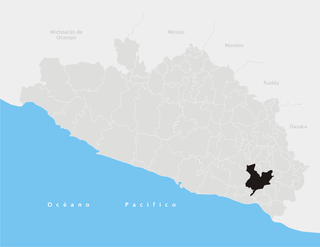 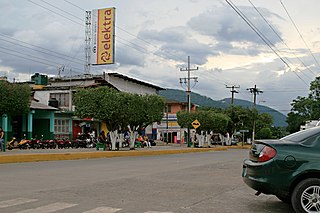 Tezonapa is a municipality located in the high mountains region in the State of Veracruz, Mexico, about 219 km from state capital Xalapa. It has a surface of 351 km2. It is located at 18°36′N96°41′W. The law number 93 of December 22, 1960 San Agustín created Tezonapa's municipality with the congregations of the Josefinas, Prison, Tezonapa, Palmarito, etc.

Zapoqui is a small town in the state of Zacatecas, Mexico. It is located about 28 kilometers (17 mi) from the town of Villanueva, birthplace of Antonio Aguilar, a famous Mexican charro.

Ahualulco is a town and municipality in San Luis Potosí in central Mexico. As of 2010, the municipality had a total population of 4,492. It was the birthplace of composer Julián Carrillo.

Aguascalientes was a federal territory of Mexico, lasting from 1835 and 1857.

The current municipality of Ignacio de la Llave, previously known as San Cristobal de la Llave, is placed in the popularly known region of La Mixtequilla, which is located in the western limit of the Papaloapan river, going through the Blanco, Limón and Las Pozas rivers. The climate of the region varie between hot-humid and tropical-humid, with frequent summer rains between July and September. The average temperature is from 64 and 72 ºF, with a maximum registered in the hi 70 ºF and the lowest in the hi 40 ºF. Ignacio de la Llave is neighbor and has deep political, social and trading relationships with: Alvarado, Acula, Ixmatlahuacan, Tlalixcoyan and Tierra Blanca.