Ties That Bind, Ties That Break is a young adult novel by Lensey Namioka, published in 1999. [1] The novel tells the story of a girl who defied tradition in China in the early 1900s and later moved to the United States. It received the Washington State Book Award in 2000. [2] A sequel, An Ocean Apart, A World Away, follows the story of Ailin's friend, Xueyan.

Tao Ailin (also called Eileen), the main character of Ties That Bind, Ties That Break, is born into the Tao family at a time when China is in great turmoil. Her story is told in a flashback; as a young woman, she meets her childhood fiance, Hanwei, again and begins to recall how she became the wife of a Chinese restaurant owner in California named James Chew.

In 1911, Aillin is a spirited girl from a strict family and is expected to have her feet bound in preparation for marriage. Foreigners in China gradually erode the traditions of the Chinese empire by introducing western philosophies; Ailin's father is one such man to perceive that the traditions that have preserved the power of the Chinese empire will not last much longer.

When Aillin is five, she is engaged to Liu Hanwei, a 7-year-old boy who is to be educated in a western school. They become friends, especially when Hanwei promises to teach her all the things he learns in public school. They are a well-matched pair and their families become close; Ailin is fortunate that her future mother-in-law genuinely likes Ailin. However, when the time comes for Ailin's feet to be bound, she refuses and the engagement is broken off. Ailin's father accepts Ailin's desire to keep her feet unbound, despite the fact it will make it harder for her to marry, and it will make life harder for her in general.

When she grows older, her father sends Ailin to a western public school called Macintosh, where Ailin learns many of the things that Hanwei once promised to teach her. Ailin is an exceptional student, especially in English lessons since she has the ability to imitate any language perfectly, and she finds a friend, a girl, with unbound feet named Xueyan (also known as Sheila,) a student who has ambitions to become a doctor. However, Ailin's education becomes a point of difficulty with the rest of her family, as educated girls are also undesirable for marriage and the school fees are expensive.

Ailin's father dies of tuberculosis when she is twelve and she loses the only support she has in her family and cannot continue with school any longer because of new head of her family, her uncle. Unable to find a man willing to marry her, her uncle, her father's older brother and the head of the family since Ailin's Grandmother died of a paralyzing stroke, offers her two choices: she either becomes a concubine by marrying a farmer, or becomes a nun. Ailin chooses none of the given options and is thrown out of the family, saved from her uncle's wrath only out of Uncle's respect and love for Ailin's father. With the help of her English teacher, Miss Gilbertson, Ailin finds work as an amah (governess) for the Warners, an American or foreigner family. When the Warner family moves briefly to the United States, Ailin leaves Shanghai with them with the blessings of her uncle.

While on the boat Ailin has to take care of the Warner kids. On the boat to California, Ailin meets a young man named James Chew and they fall in love. When the Warners decide to return to China, Ailin chooses to remain in California to marry James and help him run his restaurant. Years later, Hanwei appears in the restaurant, reunited with Ailin for the second time since their engagement was broken. After Ailin relates her story to Hanwei, he reveals that his mother, who broke off their engagement, eventually relented and would have let Hanwei marry Ailin and she could have lived in comfort. While Ailin admits her life has not been easy, she is happy and proud of how she managed life. 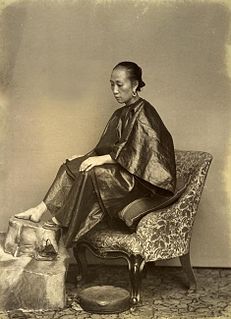 Foot binding, or footbinding, was the Chinese custom of breaking and tightly binding the feet of young girls in order to change their shape and size. Feet altered by footbinding were known as lotus feet, and the shoes made for these feet were known as lotus shoes. In late imperial China, bound feet were considered a status symbol and a mark of feminine beauty. However, footbinding was a painful practice that limited the mobility of women and resulted in lifelong disabilities.

Moment in Peking is a novel originally written in English by Chinese author Lin Yutang. The novel, Lin's first, covers the turbulent events in China from 1900 to 1938, including the Boxer Uprising, the Republican Revolution of 1911, the Warlord Era, the rise of nationalism and communism, and the start of the Sino-Japanese War of 1937-1945.

The Witch of Blackbird Pond is a children's novel by American author Elizabeth George Speare, published in 1958. The story takes place in late-17th century New England. It won the Newbery Medal in 1959.

Peacock is a 2005 film directed by Gu Changwei, written by Li Qiang. This is Gu's first film as director after a lengthy career as a cinematographer for some of China's top directors. The film premiered simultaneously in both China and in competition at the 2005 Berlin International Film Festival, going on to receive Berlin's Jury Grand Prix Silver Bear.

Lensey Namioka is a Chinese-born American writer of books for young adults and children. She writes about China and Chinese American families, as well as Japan, her husband's native country.

Love In Tokyo is a 1966 Indian Hindi-language romantic comedy film directed and produced by Pramod Chakravorty. The film was a hit at the box office.

The Story of a Noble Family is a 2003 Chinese television series based on Zhang Henshui's novel Jinfen Shijia, directed by Li Dawei. The series was first broadcast in 2003 on China Central Television in mainland China. 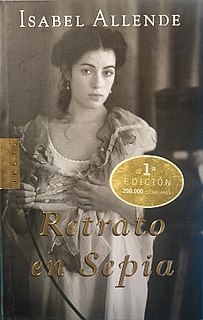 Portrait in Sepia is a 2000 novel by Isabel Allende. The novel can be thought of a sequel to Allende's Daughter of Fortune as it follows Eliza Sommers' granddaughter - Aurora del Valle. 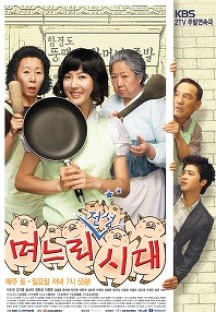 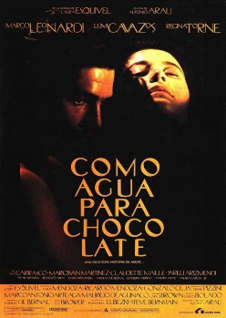 Like Water for Chocolate is a 1992 Mexican romantic drama film in the style of magical realism based on the novel, published in 1989 by first-time Mexican novelist Laura Esquivel. It earned ten Ariel Awards including the Best Picture and was nominated for a Golden Globe Award for Best Foreign Language Film. The film became the highest-grossing foreign-language film ever released in the United States at the time. The film was selected as the Mexican entry for the Best Foreign Language Film at the 65th Academy Awards, but was not accepted as a nominee.

Love Blossoms II is the second part of the long-running Chinese drama produced by Singapore's free-to-air channel, MediaCorp Channel 8. It stars Chen Shucheng, Ivy Lee, Felicia Chin, Zhang Yaodong, Terence Cao, Zheng Geping & Chew Chor Meng as the casts of the series. It is the sequel of Love Blossoms. It is shown on weekdays at 7pm.

Momo Love is a 2009 Taiwanese television series starring Jiro Wang and Calvin Chen, Cyndi Wang, Wong Jinglun and Ken Chu. It was produced by Comic International Productions and Gala Television (GTV) and directed by Chu Yu-ning. It is based on the Japanese manga series Momoka Typhoon (桃花タイフーン).

Scott Chandler is a fictional character from ABC daytime drama, All My Children. He was most recently portrayed by Adam Mayfield from April 9, 2009 to October 13, 2010. Previously, Scott was portrayed, most notably by Daniel Cosgrove from November 27, 1996 to July 28, 1998, and Forbes March from April 19, 1999 to September 14, 2000. He is a member of the powerful and wealthy Chandler family. On September 16, 2010, Mayfield, alongside Brittany Allen, were let go as Scott and Marissa Tasker in order for the writers to take the characters in a new direction, and on September 23, 2010, it was revealed that Cosgrove will be returning as Scott on December 27, 2010.

Devotion is a Singaporean Chinese drama which was telecasted on Singapore's free-to-air channel, MediaCorp Channel 8. It stars Zoe Tay, Chen Hanwei, Zhou Ying, Cynthia Wang, Zhang Zhenhuan, Kate Pang & Adeline Lim as the casts of the series. It made its debut on 28 June 2011 and ended its run on 1 August 2011. This drama serial consists of 25 episodes, and was screened on every weekday night at 9.00 pm.

Ru Baru is a Pakistani drama serial that aired on Hum TV. The show is written by Hoor Shumail, Produced by Momina Duraid, directed by Saife Hassan, and background music is done by Furqan and Imran. The drama serial premiered on 9 January 2014 in Pakistan, with the prime slot of 8:00 pm every Thursday on the channel Hum TV. 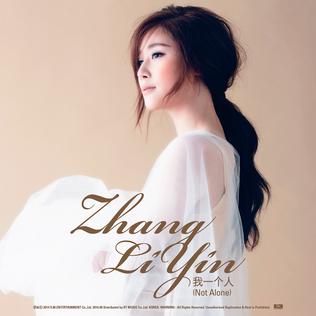 Not Alone (我一个人) is a song recorded by Chinese singer Zhang Liyin. It was released by SM Entertainment on September 20, 2014 in China and September 22 in South Korea. The song is a remake of 'By Myself' from the SBS drama Ja Myung Go which Girl's Generation member Tiffany sang back in 2009.

Shtisel is an Israeli television drama series about a fictional Haredi family living in Geula, Jerusalem. Created and written by Ori Elon and Yehonatan Indursky, the series premiered on 29 June 2013 on yes Oh. It commenced distribution via the online streaming service Netflix in 2018. The first two seasons have 12 episodes per season, and the third season has 9 episodes.