Stevenson started her career as an actress. Her credits include The Office , Days That Shook the World , People Just Do Nothing and Roisin Conaty's GameFace . [2]

She has been hosting the weekly comedy live show Old Rope in London where comedians showcase new material since 2009. [2]

Stevenson sings and plays the guitar. She sang with Craig Robinson at The Improv in Los Angeles in 2019 when he spontaneously asked her to join him on stage to do her "Stevie Nicks turns into Cartman" version [10] of "Dreams". They had been introduced only minutes before because Robinson was on The Office (US) and Stevenson was on the original UK show. [6]

Stevenson grew up in Greenford, West London. [11] Her father is originally from Prestwick in Scotland but moved to England as a teenager. [8] Her grandmother is from St. Andrews. Her partner Paul is also Scottish and frequently features in her stand-up shows as "Scottish Boyfriend Explains A Hing". [12] She has a sister. [6] Stevenson describes her parents' marriage as "a mixed-class relationship" because her father is from a wealthy Scottish-Presbyterian family and her mother is from a working-class Welsh-Kale Romani family. [6] [13]

Her father managed Wembley Stadium in the 1980s. When she was a young child she met stars like Annie Lennox and Freddie Mercury through her father's work at Wembley. [8] [6] Stevenson describes herself as "not really impressed by anyone" which she credits partly to meeting such stars frequently when she was very young and partly to becoming "jaded and cynical" when she saw many of her father's former friends disappearing from their lives after he had lost his job at Wembley. [6] Very early on in her career, a manager told her to change her last name from Stevenson-Oake to just Stevenson because the double-barrelled name made her sound "posh" while she was not posh. [6]

Stevenson lives in North London with her partner and a cat. [6]

Arabella Weir is a Scottish comedian, actress and writer. She played roles in the comedy series The Fast Show and Posh Nosh, and has written several books, including Does My Bum Look Big in This? Weir has also written for The Independent and The Guardian and the latter's Weekend magazine.

Josie Isabel Long is a British comedian. She started performing as a stand-up at the age of 14 and won the BBC New Comedy Awards at 17. 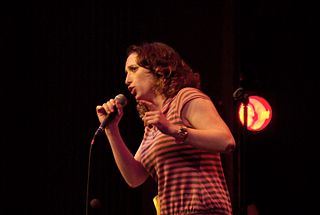 Lynn Ferguson Tweddle is a Scottish writer, actress, and story coach. She is the younger sister of comedian Craig Ferguson and is known for voicing the character of Mac in the animated film, Chicken Run.

Jack Peter Benedict Whitehall is an English comedian, actor, presenter and writer. He is known for starring as JP in the series Fresh Meat (2011–2016) and Alfie Wickers in the series Bad Education and its spin-off film The Bad Education Movie (2015). He also co-wrote the latter two. From 2012 to 2018, Whitehall was a regular panellist on the game show A League of Their Own. In 2017, he appeared with his father in the Netflix comedy documentary series Jack Whitehall: Travels with My Father and starred in the television series Decline and Fall. From 2018 to 2021, he hosted the BRIT Awards.

Sara Patricia Pascoe is an English actress, comedian and writer. She has appeared on television programmes including 8 Out of 10 Cats Does Countdown for Channel 4, QI for BBC and Taskmaster for the digital channel Dave.

Rose Catherine Lettitia Matafeo is a New Zealand comedian, actress, and TV presenter. She was a writer and performer on the NZ late-night comedy sketch show Funny Girls. In 2018, she won the Edinburgh Comedy Award for Best Show at the Edinburgh Festival Fringe for her show Horndog.

Fern Brady is a Scottish comedian and writer.

Neil Bratchpiece is a Scottish comedian, actor and writer based in Glasgow who initially found fame through his comedy persona as The Wee Man. He rose to prominence in 2007 when he appeared in the YouTube video "Here You " by NEDS Kru which became a viral success. He has made regular stand-up and comedy club appearances, including alongside his brother and father. His performances have included "Comedian Rap Battle" sketches Insane Championship Wrestling performances. Over several years, Bratchpiece has been an active YouTuber, appearing in character in multiple videos.