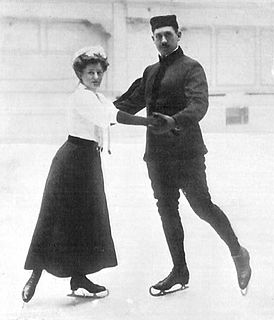 Pair skating is a figure skating discipline. The International Skating Union (ISU) defines pair skating as "the skating of two persons in unison who perform their movements in such harmony with each other as to give the impression of genuine Pair Skating as compared with independent Single Skating". The ISU also states that a pairs team must consist of "one Lady and one Man". Pair skating, along with men's and women's single skating, has been an Olympic discipline since figure skating, the oldest Winter Olympic sport, was introduced at the 1908 Olympic Games in London. The ISU World Figure Skating Championships introduced pair skating in 1908.

Tanith Jessica Louise Belbin White is a Canadian-American ice dancer and Olympic program host for NBC Sports. Though born in Canada, she holds dual citizenship and has competed for the United States since she began skating with Benjamin Agosto in 1998. With Agosto, Belbin is the 2006 Olympic silver medalist, four-time World medalist, three-time Four Continents champion (2004–2006), and five-time U.S. champion (2004–2008). 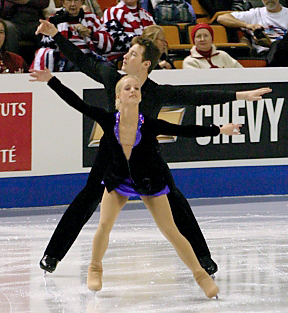 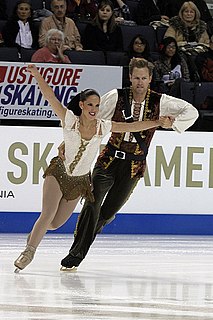 Vanessa James is a French pair skater. With her skating partner, Morgan Ciprès, she is the 2019 European Champion, the 2018 World bronze medalist, the 2017 European bronze medalist, the 2018 Grand Prix Final champion and a six-time French national champion. They have also won medals in Grand Prix and Challenger Series competitions. James and Ciprès represented France at the 2014 and 2018 Winter Olympics.

Calla Vita Urbanski-Petka is an American former pair skater. With Rocky Marval, she is the 1991 Skate America champion, the 1992 NHK Trophy bronze medalist, and a two-time U.S. national champion (1992–1993). They represented the United States at the 1992 Winter Olympics and finished tenth.

Mark Ladwig is an American pair skater. He is best known for his partnership with Amanda Evora, with whom he competed at the 2010 Winter Olympics, placing tenth. They won bronze at an ISU Grand Prix event, the 2010 Cup of Russia, and two U.S. national silver medals. He later skated with Lindsay Davis for one season.

Don Laws was an American figure skater and coach.

Shelby Lyons is an American retired competitive figure skater who competed in both singles and pairs. She originally competed as a single skater on the novice level before teaming up with Brian Wells. They won four medals at the United States Figure Skating Championships between 1995 and 1998, and competed with twice at the World Figure Skating Championships, placing 10th in 1996 and in 1998. Their partnership ended in 1998. During this time, Lyons had been competing in singles. She was the 1996 U.S. Junior national champion in singles and had competed on the Junior Grand Prix. Following the end of the partnership, Lyons went back to focusing on skating singles. She has since retired and has skated professionally on Disney on Ice. She now teaches singles, pairs, and dance in Colorado.

Caitlin Yankowskas is an American pair skater. She competed for the United States with John Coughlin from 2007 to 2011. They are the 2010 Cup of China bronze medalists and 2011 U.S. national champions. With partner Hamish Gaman, Yankowskas skated for the United Kingdom. They are the 2015 Challenge Cup silver medalists and 2015 British national champions.

Marissa Castelli is an American pair skater. With her skating partner, Mervin Tran, she is the 2017 U.S. national silver medalist.

Simon Shnapir is an American former competitive pair skater. With Marissa Castelli, he is the 2013 Four Continents bronze medalist, the 2009 World Junior bronze medalist, and a two-time U.S. national champion. The pair won a bronze medal in the team event at the 2014 Winter Olympics. After their split in May 2014, Shnapir teamed up with DeeDee Leng and competed in the 2014–15 season. 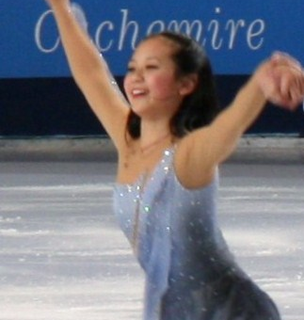 Felicia Zhang is an American former pair skater. With Nathan Bartholomay, she is a two-time U.S. national medalist and competed at the 2014 Winter Olympics.

Andrea "Anya" Davidovich is a competitive pair skater. She and Evgeni Krasnopolski were the first pair representing Israel to qualify for an Olympics. They finished 15th in Sochi.