Tiger orchid is a common name for several orchids and may refer to:

list of plants with the same or similar names

Grammatophyllum, sometimes abbreviated in horticultural trade as Gram, is a genus of 13 currently known orchid species. The name is derived from the Greek words 'gramma' and 'phyllon' (leaf), referring to the parallel leaf veins or the markings of the perianth. This epiphytic genus occurs in dense rainforest from Indo-China, to Indonesia, the Philippines, New Guinea, and the Southwest Pacific islands.

Grammatophyllum speciosum, also called giant orchid, tiger orchid, sugar cane orchid or queen of the orchids, is a species of orchid native to Indonesia. It is listed by the Guinness Book of World Records as the world's tallest orchid, with specimens recorded up to 7.62 metres (25 ft) in height.

Ansellia is considered a monotypic genus of orchid, with only one species, Ansellia africana, commonly known as African ansellia or leopard orchid, however, it is in fact a complex group of species which share common floral structure and growth habit.

Maxillaria, abbreviated as Max in the horticultural trade, is a large genus of orchids. This is a diverse genus, with very different morphological forms. Their characteristics can vary widely. They are commonly called spider orchids, flame orchids or tiger orchids. Their scientific name is derived from the Latin word maxilla, meaning jawbone, reflecting on the column and the base of the lip of some species, that may evoke a protruding jaw.

Black orchid or Black Orchid may refer to:

Bukit Barisan Selatan National Park is a national park in Sumatra, Indonesia. The park located along the Bukit Barisan mountain range, has a total area of 3,568 km2, and spans three provinces: Lampung, Bengkulu, and South Sumatra. Together with Gunung Leuser and Kerinci Seblat national parks it forms a World Heritage Site, Tropical Rainforest Heritage of Sumatra.

Rossioglossum grande is an epiphytic species of orchid native to the area from Chiapas to Costa Rica. The plant may grow four to eight flowers, each may reach up to 13 inches in diameter. The flowers are a glossy bright golden yellow with brown barring. Larger pedals are yellow with the lower half red-brown. The lip is white and sometimes flecked with red-brown. The pseudobulbs carry a gray-green color to them, and grow from 4 to 10 cm, each with two leaves. It prefers hot, wet summers and cool, dry winters. It mainly flowers in the winter.

Dendrobium speciosum, commonly known as rock orchids or cane orchids, is a species of highly variable Australian orchids. Its varieties can be found in a range of habitats as an epiphyte or a lithophyte. It has a continuous distribution along the east coast of Australia and in distinct populations along the Tropic of Capricorn. As a lithophyte, it forms gigantic spreading colonies on rocks and cliff faces, often exposed to full sun, with its roots forming dense, matted beds across the rock that anchor the plant. It can be found at altitudes from sea level to 900 metres (3,000 ft).

Lycaste aromatica, common name the sweet scented lycaste, is a species of flowering plant in the genus Lycaste of the family Orchidaceae.

Grammatophyllum scriptum is a species of orchid. The flowers are generally up to 4.5 cm wide, green with dark brown markings, held in racemes of up to 150 blooms. G. scriptum is native to south east Asia and is found in low-lying coastal areas. In the Philippines, this type of orchid is called "tawatawa".

Maxillaria tenuifolia, the delicate-leafed maxillaria or coconut pie orchid, is a species of orchid ranging from Mexico to Nicaragua and possibly Costa Rica. These plants are easy to grow if kept moist and given good air movement in a high-light windowsill of any orientation but North.

Peristeria elata is a species of orchid occurring from Central America to Panamá, Venezuela and Ecuador. It is the type species of its genus. It is commonly referred to as the Holy Ghost orchid, dove orchid or flower of the Holy Spirit in English, and, as the flor del Espiritu Santo in Spanish.

Rossioglossum is a genus of flowering plants from the orchid family, Orchidaceae. It has 9 currently recognized species, all native to Mexico, Central America, and northern and western South America.

Bromheadia finlaysoniana, commonly known as the pale reed orchid and as Bromheadia pulchra in Australia, is a plant in the orchid family and is native to areas from Indochina to northern Australia. It is a terrestrial orchid with a tough upright, stem and stiffly spreading, elliptic to egg-shaped leaves. There is a long flowering stem with a short zig-zag section near the end where single flowers open in succession. The flowers are white with a yellow labellum.

Giant orchid is a common name for several plants and may refer to: 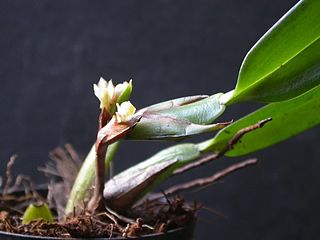 Camaridium vestitum, called purple tiger orchid, is a species of epiphytic orchids native to Florida, the West Indies and through Latin America from Mexico to Bolivia.

Cyrtopodium longibulbosum, the cana-cana, of the Ecuadorian Amazon and adjacent Peru and possibly Colombia is the largest Orchid species in the Western Hemisphere with large clusters of pseudobulbs each up to 11 ft 6 in in length by about two inches (5.1 cm) in width, yet it remained unknown to science until 1993. 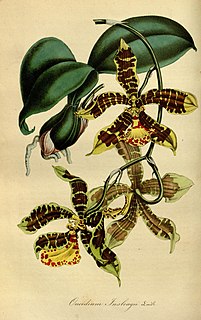 Rossioglossum insleayi is an epiphytic species of orchid native to Mexico, where it grows in the humid high oak/pine forests on the Pacific West/ It was first described by Baker in 1840, and in 1976 was assigned to the genus, Rossioglossum, by Garay and Kennedy.

Trachoma speciosum, commonly known as the showy spectral orchid, is an epiphytic or lithophytic orchid that forms clumps with many thick, cord-like roots, between four and eight thick, leathery leaves and many short-lived, cream-coloured flowers with an orange and white labellum. This orchid occurs in tropical North Queensland.