Tiger tank may refer to: 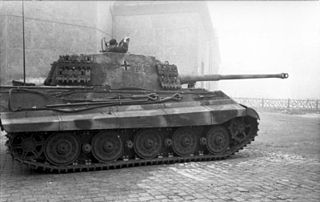 The Tiger II is a German heavy tank of the Second World War. The final official German designation was Panzerkampfwagen Tiger Ausf. B, often shortened to Tiger B. The ordnance inventory designation was Sd.Kfz. 182. It was known as King Tiger by Allied soldiers, and is also known under the informal name Königstiger. The name Königstiger was never used in contemporary German documentation, but was used extensively after the war. 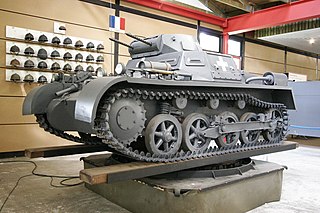 The Panzer I was a light tank produced in Nazi Germany in the 1930s. Its name is short for Panzerkampfwagen I, abbreviated as PzKpfw I. The tank's official German ordnance inventory designation was Sd.Kfz. 101. 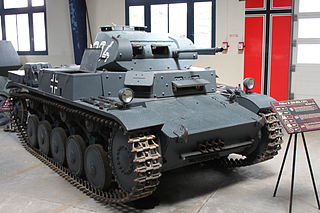 The Panzer II is the common name used for a family of German tanks used in World War II. The official German designation was Panzerkampfwagen II. 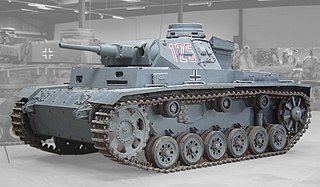 The Panzerkampfwagen III, commonly known as the Panzer III, was a medium tank developed in the 1930s by Germany, and was used extensively in World War II. The official German ordnance designation was Sd.Kfz. 141. It was intended to fight other armoured fighting vehicles and serve alongside and support the similar Panzer IV, which was originally designed for infantry support. However, as the Germans faced the formidable T-34, more powerful anti-tank guns were needed, and since the Panzer IV had more development potential with a larger turret ring, it was redesigned to mount the long-barrelled 7.5 cm KwK 40 gun. The Panzer III effectively swapped roles with the Panzer IV, as from 1942 the last version of Panzer III mounted the 7.5 cm KwK 37 L/24 that was better suited for infantry support. Production of the Panzer III ceased in 1943. Nevertheless, the Panzer III's capable chassis provided hulls for the Sturmgeschütz III assault gun until the end of the war. 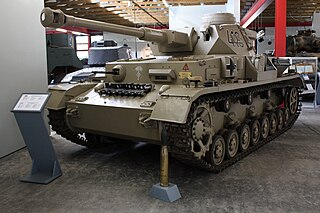 The Panzerkampfwagen IV, commonly known as the Panzer IV, was a German medium tank developed in the late 1930s and used extensively during the Second World War. Its ordnance inventory designation was Sd.Kfz. 161. 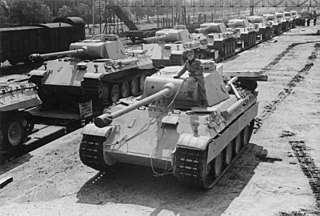 The Panther is a German medium tank deployed during World War II on the Eastern and Western Fronts in Europe from mid-1943 to the war's end in 1945. It had the ordnance inventory designation of Sd.Kfz. 171. It was designated as the Panzerkampfwagen V Panther until 27 February 1944, when Hitler ordered that the Roman numeral "V" be deleted. Contemporary English-language reports sometimes refer to it as the "Mark V". 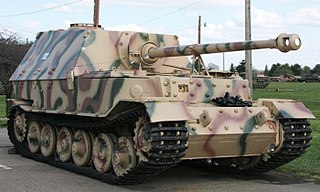 The Elefant was a heavy tank destroyer used by German Wehrmacht Panzerjäger during World War II. Ninety-one units were built in 1943 under the name Ferdinand, after its designer Ferdinand Porsche, using tank hulls produced for the Tiger I tank design abandoned in favour of a Henschel design. 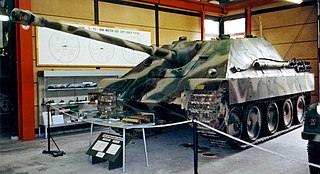 The Jagdpanther, Sd.Kfz. 173, was a tank destroyer built by Germany during World War II. The Jagdpanther combined the 8.8 cm Pak 43 anti-tank gun, similar to the main gun of the Tiger II, and the armor and suspension of the Panther chassis. 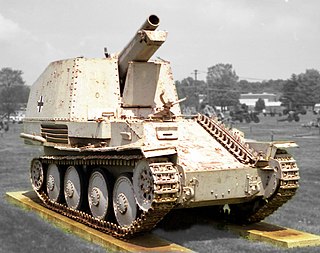 The 15 cm sIG 33 (Sf) auf Panzerkampfwagen 38(t), also known as Grille was a series of self propelled artillery vehicles used by Nazi Germany during World War II. The Grille series was based on the Czech Panzer 38(t) tank chassis and used a 15 cm sIG 33 infantry gun. 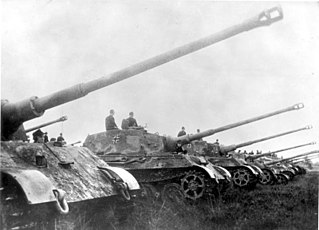 The Bergepanzerwagen V, often referred to simply as the "Bergepanther", was a variant of the Panzerkampfwagen V Panther.

The Panzerkampfwagen I was a light tank produced in Germany in the 1930s. The Panzer I was built in several variants and was the basis for a number of variants listed below. 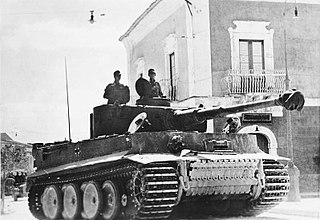 This article on military tanks deals with the history of tanks serving in the German Army (Heer) from the Deutsches Heer of World War I, the interwar period, and the Panzers of the German Heer during World War II, the Cold War and modern times.

The VK 45.02 (P) was the official designation for an unsuccessful heavy tank project designed by Ferdinand Porsche in Nazi Germany during World War II to compete with Henschel's design. 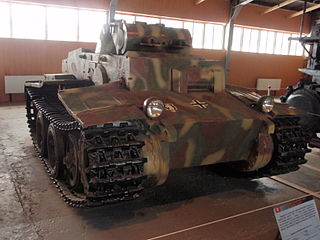 The Panzerkampfwagen I Ausf. F, also known as VK 18.01, is a German light tank from World War II. Despite the fact that it was designated as a modification of the light tank Panzer I, the VK.18.01 was a completely new vehicle, had almost nothing to do with it. The Pz.Kpfw.I Ausf.F was created in 1942 as a light tank designed to storm fortified lines. In that same year, 30 units were produced. Since 1943 it was used for anti-guerrilla operations on the Eastern Front and in Yugoslavia. Thirty Ausf F tanks were built between April and December 1942, eight of which were sent to the Eastern Front for evaluation.

The Panzerkampfwagen I Ausf. C, also known as its prototype name VK 6.01, was a German light tank from the Second World War. Although the Panzer I Ausf. C was formally designated as a modification of the Panzer I, it was actually a completely new vehicle. This variant has little similarity with earlier Ausf. A and B variants - one of the main distinctions being the use of the Schachtellaufwerk inter-leaved track wheels which was used in many later German tanks during the war