Tim DeLaughter (born November 18, 1965) is an American rock musician. He is the frontman of the bands Tripping Daisy, The Polyphonic Spree, and Preteen Zenith.

At the 61st Primetime Creative Arts Emmy Awards, DeLaughter was nominated for Outstanding Original Main Title Theme Music for his work on the television series United States of Tara .

As a teenager, DeLaughter played in various Duncanville bands as a drummer. However, he was poor at the instrument and began teaching himself to sing and play guitar. [1]

Following the death of guitarist Wes Berggren in 1999, Tripping Daisy disbanded. [2] The next year, DeLaughter formed The Polyphonic Spree. [2]

Music critic Mike Boehm described DeLaughter's singing style as a "nasally vocal blend of Ozzy Osbourne and Perry Farrell. [3] The Boston Globe's Joan Anderman described him as "sounding like Wayne Coyne of the Flaming Lips starring in a stoner production of Godspell ". [4]

DeLaughter has no siblings and his parents divorced when he was a child. [5] His grandfather was a Southern Baptist preacher. [2]

DeLaughter and his wife, Julie Doyle, met while they were students at Duncanville High School. [6] Their fourth child was born in December 2006. Doyle is also a member of The Polyphonic Spree. [7]

The Polyphonic Spree is an American choral rock band from Dallas, Texas that was formed in 2000 by singer/songwriter Tim DeLaughter. The band's pop and rock songs are augmented by a large vocal choir, and instruments such as flute, trumpet, french horn, trombone, violin, viola, cello, percussion, piano, guitars, bass, drums, electronic keyboards, and EWI.

Tripping Daisy is a neo-psychedelic pop rock band that was formed in Dallas, Texas, by lead singer/guitarist Tim DeLaughter in 1990 along with Jeff Bouck (drums), Wes Berggren (guitar) and Mark Pirro (bass).

The Second City is an improvisational comedy enterprise and is the first ongoing improvisational theater troupe to be continually based in Chicago, with training programs and live theatres in Toronto and Los Angeles. The Second City Theatre opened on December 16, 1959, and has since become one of the most influential and prolific comedy theatres in the world. In February 2021, ZMC, a private equity investment firm based in Manhattan, purchased the Second City.

Good Records is the record label formed by Tim DeLaughter, the lead singer of The Polyphonic Spree and the alternative-rock band Tripping Daisy. It has its own record store in Dallas, Texas.

The Beginning Stages of... is the debut album from The Polyphonic Spree. The US re-release version of the album has both the original CD plus a bonus CD that features four alternate tracks and a music video for the single version of "Light and Day". The UK re-release is identical to the original release. The album is also available on gatefold vinyl.

Thumbsucker is the soundtrack to the film of the same name, which is based in the novel of the same name by Walter Kirn. It was released on September 13, 2005, under the Hollywood Records label. It was originally intended to be created by Elliott Smith, but after his death in 2003, The Polyphonic Spree was chosen to complete it when director Mike Mills attended a performance of theirs and was impressed. Three tracks by Smith remain on the release.

Duncanville High School is a secondary school located in Duncanville, Texas, United States, in the Dallas-Fort Worth area. The school is a part of Duncanville Independent School District. 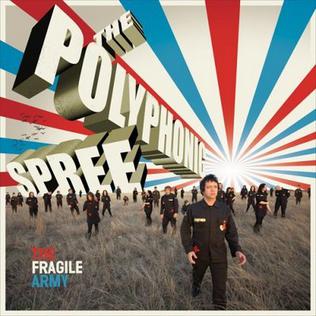 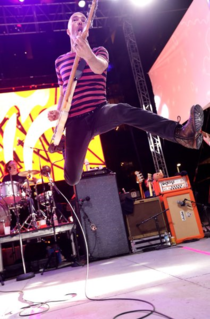 Wes Berggren was an American musician and former guitarist for the rock band Tripping Daisy.

Richard Dresser is an American playwright, screenwriter, novelist and teacher whose work has been performed in New York, leading regional theaters, and all over Europe. His first dystopian fiction novel, It Happened Here, an oral history of an American family from the years 2019 to 2035, dealing with life in a totalitarian state when you still have Netflix and two-day free shipping and all you've lost is your freedom, was released in October 2020. He is co-producing a documentary about Daniel and Phillip Berrigan, antiwar priests and lifelong activists.

Dorian Jose Holley is an American musician, backing singer and a vocal coach. He began his professional career as an on-stage backing vocalist for American entertainer Michael Jackson during his Bad World Tour in 1987. He staged a series of live concerts in front of audiences around the world, including the British royalty. From there, Holley went on to travel with Jackson for all of his subsequent world tours. He also performed with other artists such as Rod Stewart in 1991 and James Taylor in 1994 and since 2019, replacing the late David Lasley. In 1991, Holley was the singing voice of Choir Boy in the Robert Townsend movie, The Five Heartbeats. His stage presence and vocal ability were praised by music critics during such performances.

Yes, It's True is the fourth studio album by American pop band The Polyphonic Spree. It was released on August 6, 2013.