Timeline of The Hitchhiker's Guide to the Galaxy versions

This timeline shows the dates (and order of release) of all of the various media relating to Douglas Adams' The Hitchhiker's Guide to the Galaxy series. Where multiple releases/broadcasts occurred, the first one is given.

Bubblegum Crisis is a 1987 to 1991 cyberpunk original video animation (OVA) series produced by Youmex and animated by AIC and Artmic. The series was planned to run for 13 episodes, but was cut short to just 8. 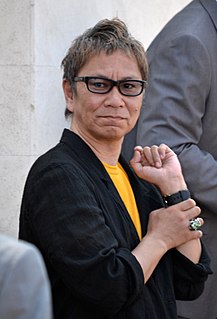 Takashi Miike is a Japanese filmmaker. He has directed over one hundred theatrical, video and television productions since his debut in 1991. His films range from violent and bizarre to dramatic and family-friendly.

Bandai Co., Ltd. is a Japanese toy maker and a producer of a large number of plastic model kits as well as a former video game company. It was the world's third-largest producer of toys in 2008 after Mattel and Hasbro. Some ex-Bandai group companies produce anime and tokusatsu programs. Its headquarters is located in Taitō, Tokyo.

Data East Corporation, also abbreviated as DECO, was a Japanese video game and electronic engineering company. The company was in operation from 1976 to 2003, and released 150 video game titles. Its main headquarters were located in Suginami, Tokyo. The American subsidiary, Data East USA, was headquartered in San Jose, California. 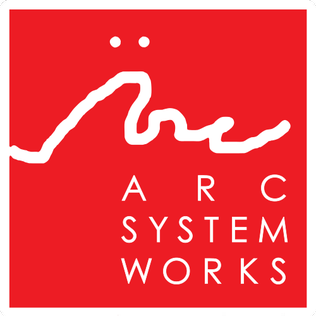 Arc System Works Co., Ltd. is a video game developer and publisher based in Yokohama, Japan. Founded by Minoru Kidooka in 1988, Arc System Works is known for its arcade 2D fighting game franchises, Guilty Gear and BlazBlue, as well as other licensed-based fighting games from Shueisha/Shonen Jump's Dragon Ball and Atlus's Persona 4 Arena.

Nerf is a toy brand created by Parker Brothers and currently owned by Hasbro. Most of the toys are a variety of foam-based weaponry, with other Nerf products including balls for sports like American football, basketball and baseball. The most notable of the toys are the dart guns that shoot ammunition made from Nerf foam. Since many such items were released during the 1970s, Nerf products often feature bright neon colors and soft textures similar to the flagship Nerf ball. The slogan, which has been frequently used since advertising in the 1990s, is "It's Nerf or Nothin'!". Annual revenues under the Nerf brand are approximately US$400 million.

1985 saw many sequels and prequels in video games and several new titles such as Gradius, Super Mario Bros. and Duck Hunt.

The UEFA Champions League video game license has been used by four different companies, with a surprising irregularity, given the competitions' fan-base and popularity. Debuted in 1996, the series has only had five games published so far, and after being in the hands of Krisalis Software, Silicon Dreams Studio and Konami, the license now lies in the hands of EA. 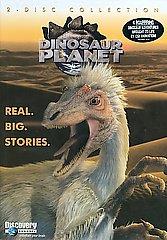 Dinosaur Planet is a four-part American nature documentary that aired on the Discovery Channel as a special-two night event on December 14 and 16, 2003. It is hosted by paleontologist Scott Sampson and narrated by actor Christian Slater. It was released on DVD as a two-disc pack on February 17, 2004, and was also released on VHS around the same time.

This is a survey of the postage stamps and postal history of Mozambique.

Axis & Allies: Guadalcanal, released in 2007, is the fifth spinoff board game of the Axis & Allies series of games, focusing on the Solomon Islands Campaign. Like the rest of the games in the series, it was created by Larry Harris and published by Avalon Hill. This game is of a personal significance to Harris, as explained in the game's manual, since his father had been stationed at Guadalcanal, the setting of this game. 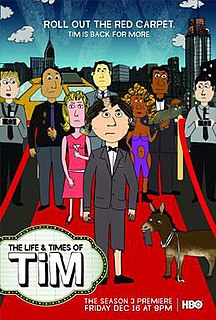 The Life & Times of Tim is an American adult animated sitcom, which premiered on September 28, 2008. The series was created by Steve Dildarian, and is about a hapless man in his mid-20s named Tim who lives in New York City with his girlfriend Amy. Throughout the series, Tim constantly finds himself in increasingly awkward situations in both his work and personal life.

"Feelin' on Yo Booty" is an R&B song by American singer-songwriter R. Kelly, from his fourth studio album, TP-2.com. Released in August 2001, it is the fourth single from the album.

ALTBalaji is a subscription based Video on demand platform which is a wholly owned subsidiary of Balaji Telefilms Ltd. Launched on 16 April 2017, ALTBalaji is the Group's foray into the digital entertainment to create original, premium, and tailor-made content especially for Indians across the globe.

ZEE5 is a video on demand website run by Zee Entertainment Enterprises Limited (ZEEL). It was launched in India on 14 February 2018 with content in 12 languages.

The FIA World Cup for Cross-Country Bajas is a rally raid series organised by the FIA, culminating with a champion driver.