Thomas Donald Traves (born 1948) is a Canadian academic professor and administrator. He was the 10th President of Dalhousie University, serving from 1995 to 2013. He was appointed for a one year term as Interim President of Brock University on October 1, 2016. [1]

Born in Winnipeg, Manitoba, Traves received a Bachelor of Arts degree in 1970 from the University of Manitoba. He also received a Master of Arts degree in 1971 and a PhD in 1976 from York University. In 1974, he started teaching at York University as a lecturer. He became an assistant professor in 1976 and was an associate professor from 1976 to 1991. From 1981 to 1983, he was Chairman in the division of social science. From 1983 to 1991, he was Dean of the Faculty of Arts. From 1991 to 1995, he was Vice President (Academic) and a professor of history at the University of New Brunswick. In 1995, he was appointed to a six-year term as President and Vice-Chancellor of Dalhousie University. He was appointed to a second six-year term in 2000 and was appointed for a three-year term starting in 2007. Since becoming president, enrollments at Dalhousie have grown by over 40 per cent and external research grant and contract income has increased by 300 per cent.

He also has an honorary doctorate from Umeå University in Sweden.

He is the author of The State and Enterprise: Canadian Manufacturers and the Federal Government, 1917-1931 and editor of Essays in Canadian Business History.

The University of King's College, established in 1789, is in Halifax, Nova Scotia, Canada. It is the oldest chartered university in Canada, and the first English-speaking university in the Commonwealth outside the United Kingdom. The university is regarded for its Foundation Year Program, a comprehensive and interdisciplinary examination of Western culture through great books, designed for first-year undergraduates. It is also known for its upper-year interdisciplinary programs – particularly its contemporary studies program, early modern studies program, and its history of science and technology program. In addition, the university has a journalism school that attracts students from across the world for its intensive Master of Journalism programs and its Master of Fine Arts in creative nonfiction, the first of its kind in Canada. Its undergraduate journalism programs are known for leading content in digital formats.

Keith Gilbert Robbins was a British historian and Vice-Chancellor of the University of Wales, Lampeter. Professor Robbins was educated at Bristol Grammar School, and Magdalen and St Antony’s Colleges, Oxford. 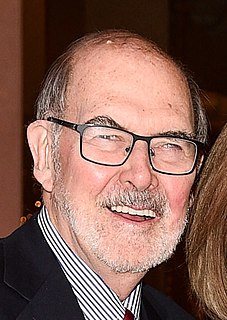 Peter A. Herrndorf, is a Canadian lawyer and media businessman. He retired as the president and chief executive officer of the National Arts Centre on June 2, 2018. 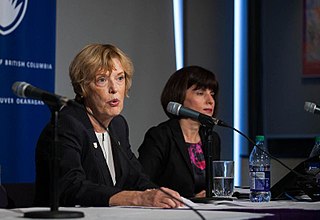 Martha C. Piper is a Canadian academic and administrator who was the president and vice-chancellor of the University of British Columbia (UBC) from 1997 until 2006. She was the 11th person and the first woman to serve as president of UBC. Having been born in Lorain, Ohio, she is also the first person born outside Canada to have held the position. She is a Canadian citizen and was made an officer of the Order of Canada in 2002. Her contract with UBC stipulated a salary of $350,000 plus incentive payments of up to $50,000 per year upon meeting the performance goals set by the Board of Governors.

R. Peter MacKinnon, is a Canadian lawyer and legal academic. MacKinnon served as the president of the University of Saskatchewan from 1999 to 2012. On 1 July 2014, he was named as the interim president of Athabasca University.

Bruce Kidd, is a Canadian academic, author, and athlete.

Arnold Naimark, is a Canadian physician, academic, and former President of the University of Manitoba.

Herbert Allan Borden Leal, was a Canadian civil servant and academic. He was Deputy Attorney General of Ontario, Dean of Osgoode Hall Law School, and Chancellor of McMaster University.

Doug Owram is Professor of History and was Deputy Vice-Chancellor of the University of British Columbia Okanagan from 2006 to 2012, a post he assumed on July 1, 2006. He was formerly Vice President (Academic) and Provost at the University of Alberta.

Howard Charles Clark, is a Canadian chemist and university administrator.

Alexander Gordon "Sandy" McKay, was a Canadian academic who specialized in Vergilian studies.

Max Blouw was the president and vice-chancellor of Wilfrid Laurier University. He was inducted into this position on September 1, 2007. After serving two 5 year terms, Blouw stepped down and was replaced by Deborah MacLatchy.

Henry Edmison Duckworth, was a Canadian physicist and university administrator.

Daniel Robert Woolf is a British-Canadian historian. He served as the 20th Principal and Vice-Chancellor of Queen's University in Kingston, Ontario, a position to which he was appointed in January 2009 and took up as of 1 September 2009. He was previously Professor, Department of History and Classics, at the University of Alberta in Edmonton, where he also served as Dean of the Faculty of Arts until April 2009. He was reappointed to a second term as Queen’s Principal early in 2013. On 28 November 2017 Woolf announced his intention to retire from the Principalship at the end of June 2019. He was succeeded by Patrick Deane, and appointed Principal Emeritus by Queen’s Board of Trustees. He was awarded an Honorary Doctor of Laws degree by Queen’s for services to scholarship and higher education.

David T. Barnard, is a Canadian computer scientist, academic, and, from 2008 to 2020, the 11th president and vice-Chancellor of the University of Manitoba. He was chair of Universities Canada.