Thomas A. Wasow is an American linguist, the Academic Secretary to the University at Stanford University. He is also Professor of Linguistics, emeritus, and the Clarence Irving Lewis Professor of Philosophy, emeritus . [1]

Wasow did his undergraduate studies in mathematics at Reed College, graduating in 1967. [2] [3] He earned his Ph.D. in linguistics from the Massachusetts Institute of Technology in 1972, and joined the Stanford faculty in 1973. [2] [3] At Stanford, he was a co-founder of the Center for the Study of Language and Information and directed it from 1986 to 1987 and 2006 to 2007. [3] He served a four-year term as Dean of Undergraduate Studies at Stanford beginning in 1987, another four-year term as Associate Dean of Graduate Policy beginning in 1996, was chair of the faculty senate for the 2003-4 academic year, [2] and chaired the linguistics department from 2007 to 2010 and 2011 to 2014. He has won Stanford's Rhodes Prize and Dinkelspiel Prize for his leadership of the Symbolic Systems program, an interdisciplinary undergraduate major he directed for thirteen years. [3] He was appointed to the Lewis professorship in 2008. [4] In 2015 he was named a Fellow of the Linguistic Society of America [5] and in 2019 he was named a Fellow of the American Association for the Advancement of Science.

He is also an avid bicyclist, [6] and has been active combating homelessness and developing low-income housing in the Palo Alto area. [2] [7]

Stanford University, officially Leland Stanford Junior University, is a private research university in Stanford, California. Stanford is ranked among the most prestigious universities in the world by numerous major education publications.

Ivan Andrew Sag was an American linguist and cognitive scientist. He did research in areas of syntax and semantics as well as work in computational linguistics. 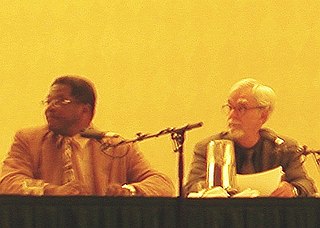 Kimmo Matti Koskenniemi is the inventor of finite-state two-level models for computational phonology and morphology and a professor of Computational Linguistics at the University of Helsinki, Finland. In the early 1980s Koskenniemi's work became accessible by early adopters such as Lauri Karttunen, Ronald M. Kaplan and Martin Kay, first at the University of Texas Austin, later at the Xerox Palo Alto Research Center.

Patrick Colonel Suppes was an American philosopher who made significant contributions to philosophy of science, the theory of measurement, the foundations of quantum mechanics, decision theory, psychology and educational technology. He was the Lucie Stern Professor of Philosophy Emeritus at Stanford University and until January 2010 was the Director of the Education Program for Gifted Youth also at Stanford.

Joan Wanda Bresnan FBA is Sadie Dernham Patek Professor in Humanities Emerita at Stanford University. She is best known as one of the architects of the theoretical framework of Lexical-Functional Grammar.

Ronald M. Kaplan has served as a Vice President at Amazon.com and Chief Scientist for Amazon Search (A9.com). He was previously Vice President and Distinguished Scientist at Nuance Communications and director of Nuance' Natural Language and Artificial Intelligence Laboratory. Prior to that he served as Chief Scientist and a Principal Researcher at the Powerset division of Microsoft Bing. He is also an Adjunct Professor in the Linguistics Department at Stanford University and a Principal of Stanford's Center for the Study of Language and Information (CSLI). He was previously a Research Fellow at the Palo Alto Research Center, where he was the manager of research in Natural Language Theory and Technology.

Penelope "Penny" Eckert is a professor of linguistics at Stanford University in Stanford, California, where she holds the position of "Albert Ray Lang Professor of Linguistics". She is a prominent scholar of variationist sociolinguistics and is the author of several scholarly works on language and gender. She served as the President of the Linguistic Society of America in 2018.

Lauri Juhani Karttunen is an Adjunct Professor in Linguistics at Stanford and an ACL Fellow.

Mary Dalrymple, FBA is a professor of syntax at Oxford University. At Oxford, she is a fellow of Linacre College. Prior to that she was a lecturer in linguistics at King's College London, a senior member of the research staff at the Palo Alto Research Center in the Natural Language Theory and Technology group and a computer scientist at SRI International. She received her PhD in linguistics from Stanford University in 1990. Her master's degree and bachelor's degree are from the University of Texas, Austin and Cornell College, respectively. She has also been associated with CSLI as a researcher.

Georgia M. Green is an American linguist and academic. She is an emeritus professor at the University of Illinois at Urbana-Champaign. Her research has focused on pragmatics, speaker intention, word order and meaning. She has been an advisory editor for several linguistics journals or publishers and she serves on the usage committee for the American Heritage Dictionary. 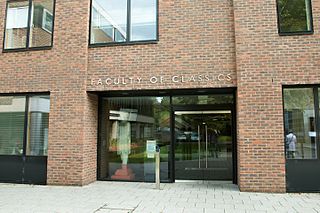 The Faculty of Classics is one of the constituent departments of the University of Cambridge. It teaches the Classical Tripos. The Faculty is divided into five caucuses ; literature, ancient philosophy, ancient history, Classical art and archaeology, linguistics, and interdisciplinary studies.

Emily M. Bender is an American linguist who works on multilingual grammar engineering. She has constructed the LinGO Grammar Matrix, an open-source starter kit for the development of broad-coverage precision HPSG grammars. In 2013 she published Linguistic Fundamentals for Natural Language Processing: 100 Essentials from Morphology and Syntax, which explains basic linguistic principles in a way that makes them accessible to NLP practitioners.