Tom Wiggall is a British composer who writes music for film and for the stage. He has taught composition in the University of Birmingham, Birmingham Conservatoire and Birkbeck, University of London, the Royal College of Music, North London Collegiate School, Surbiton High School and Highgate School. Tom was also the Director of Music at Brighton College. He is currently Director of Music at Harrow International School Hong Kong.

Wiggall's work includes Alban , a community opera commissioned by St Albans Cathedral Music Trust and premiered in May 2009. [1] He has composed an anthem for Southwell Minster [2] and the title music for Faith in the Frame, a television series by Melvyn Bragg for ITV1. He has composed for many theatre projects and made arrangements for BBC Two's Friday Night is Music Night. Other work includes: 'Hic est enim', an Advent carol commissioned for Harrow School's 2011 Nine Lessons and Carols; 'Gloria' and 'Amor nos Semper Ducat', works for the combined choirs of Surbiton High School; music for IBM's recent X-force viral advertising campaign.

In recent years Tom has also composed for independent film and theatre projects, having his music played in venues including the Riverside Studios, The Soho Curzon, The Criterion Theatre and the Royal Opera House. His work for television and radio includes music for Channel 4's 'The Art Show' documentary series and arrangements for BBC2's 'Friday Night is Music Night'. 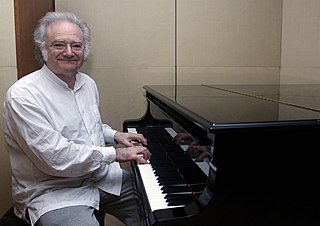 Carl Davis, is an American-born conductor and composer who has made his home in the United Kingdom since 1961. In 1970 he married the English actress Jean Boht.

Howard Lindsay Goodall is an English composer of musicals, choral music and music for television. He also presents music-based programmes for television and radio, for which he has won many awards. In May 2008, he was named as a presenter and Composer-in-Residence with the UK radio channel Classic FM. In May 2009, he was named "Composer of the Year" at the Classic BRIT Awards.

Graham John Bickley is an English actor and singer. He is best known for playing the role of Joey Boswell in Bread from 1989 until 1991, taking over from Peter Howitt, who played him from 1986 until 1989.

Gary William Friedman is an American musical theatre, symphonic, film and television composer. His career began in the 1960s in New York City as a saxophonist in an improvisational ensemble and as a composer for experimental theater. Friedman's 1970 musical, The Me Nobody Knows opened Off-Broadway and won the Obie Award for Best Music of a Musical before moving to Broadway and earning five Tony Award nominations. Friedman has also composed scores for numerous American films and television series such as PBS's children's television series, The Electric Company. His orchestral and operatic compositions have been commissioned by festivals and venues including the Kennedy Center for the Performing Arts.

Jonathan Dove is an English composer of opera, choral works, plays, films, and orchestral and chamber music. He has arranged a number of operas for English Touring Opera and the City of Birmingham Touring Opera, including in 1990 an 18-player two-evening adaptation of Wagner's Der Ring des Nibelungen for CBTO. He was Artistic Director of the Spitalfields Festival from 2001 to 2006.

John Hardy is an English-born composer who has been commissioned by the Arts Council/National Lottery, the BBC, Welsh National Opera and the BBC National Orchestra of Wales, among others. His work includes opera, choral and orchestral pieces, site-specific theatre events and film.

Gavin Sutherland is a conductor, composer/arranger and pianist. He is currently Music Director for English National Ballet.

Dr Andrew Toovey is a classical composer, and recipient of composition awards including the Tippett Prize, Terra Nova Prize, the Bernard Shore Viola Composition Award and an RVW Trust Award. Two portrait CDs of his music were released on the Largo label in 1998, and many individual pieces are represented on others CD labels including NMC. His music is partially published by Boosey and Hawkes, and most of his output is available to view on YouTube on his own channel. There is an comprehensive website (www.andrewtoovey.co.uk) where all of Toovey's music can be seen in PDF format with a complete worklist, timeline outlining events of each year and performance list. He has worked extensively on education projects for Glyndebourne Opera, English National Opera, Huddersfield Festival, the South Bank Centre and the London Festival Orchestra, and has been composer-in-residence at Opera Factory and the South Bank Summer School. He is now a full-time composer, but used to teach part-time at Bishop Ramsey School, Ruislip, Middlesex and Alperton Community School in Wembley. He currently teaches composition at the Royal Birmingham Conservatoire part of BCU.

Philip Lane is an English composer and musicologist. He is noted for his light music compositions and arrangements, as well as his painstaking work reconstructing lost film scores.

David Sawer, is a British composer of opera and choral, orchestral and chamber music.

Malcolm Edmonstone is a British jazz pianist and pop arranger. He studied at the Guildhall School of Music and Drama, where he became Head of Jazz. He has conducted and arranged for the BBC Concert Orchestra numerous times for BBC Radio 2, featuring vocalists Rick Astley, Katie Melua, Mark King, Ruby Turner, Tommy Blaize, Tony Momrelle and Heather Small. In 2019 he began writing for Gary Barlow. In 2016 he made his BBC Proms debut, arranging and conducting for Iain Ballamy and Liane Carroll. In 2020 he was Music Director at the National Theatre for Tony Kushner’s adaptation of The Visit (play)

Alban is a community opera in two acts with music by Tom Wiggall and libretto by John Mole.

John Mole is an English poet for adults and children, born in Taunton in 1941. Some of his poems present political issues to young people. He is also a jazz clarinetist.

Samuel Alexander "Sandy" Faris was a Northern Irish composer, conductor and writer, known for his television theme tunes, including the theme music for the 1970s TV series Upstairs, Downstairs. He composed and recorded many operas and musicals, and also composed film scores and orchestral works. As a conductor, he was especially known for his revivals of Jacques Offenbach and Gilbert and Sullivan operettas.

Bill Homewood is an English television and stage actor and singer. He worked on several BBC Children's television series in the 1970s and 1980s, and was subsequently known for his work in the Royal Shakespeare Company, in the West End, on tour, and his recordings of audiobooks. He is also a published poet.

Christopher Whelen was an English composer, conductor and playwright, best known for his radio and television operas. Because much of his work was written for specific theatre productions in the 1950s, or directly for broadcast in the 1960s, little of it survives today.