Tom M. L. Wigley is a climate scientist at the University of Adelaide. He is also affiliated with the University Corporation for Atmospheric Research (UCAR). [4] He was named a fellow of the American Association for the Advancement of Science (AAAS) for his major contributions to climate and carbon cycle modeling and to climate data analysis, and because he is "one of the world's foremost experts on climate change and one of the most highly cited scientists in the discipline." [5] His h-index (April 2019) is 107, one of the highest in the discipline. He contributed to many of the reports published by the Intergovernmental Panel on Climate Change (the work of the IPCC, including the contributions of many scientists, was recognised by the joint award of the 2007 Nobel Peace Prize).

His published papers include the first paper to demonstrate 20th century warming using both land and marine data, the first paper to include the effects of aerosol cooling on projections of future climate change, the first paper to provide realistic scenarios for the stabilization of atmospheric CO2, and the first paper to use pattern-based methods to identify a significant human influence on the climate. Wigley has also published a number of highly cited papers in aqueous geochemistry, including a now-standard method for carbon dating of groundwater. Wigley has argued in the popular media that the IPCC has been too optimistic about the prospect of averting harmful climate change by reducing greenhouse emissions [8] through the use of renewable technologies alone, and argued that any realistic portfolio must include significant contributions from nuclear energy. He has also pointed out that "the human-induced changes that are expected over the next 100 years are much, much greater than any changes that societies experienced in the past." [9] In 2013, with other leading experts, he was co-author of an open letter to policy makers, which stated that "continued opposition to nuclear power threatens humanity's ability to avoid dangerous climate change." [10]

Benjamin David Santer is a climate researcher at Lawrence Livermore National Laboratory and former researcher at the University of East Anglia's Climatic Research Unit. He also worked at the Max Planck Institute for Meteorology from 1987 to 1992. He specializes mainly in statistical analysis of climate data sets, and detection/attribution of climate change forcings.

Stephen Henry Schneider was Professor of Environmental Biology and Global Change at Stanford University, a Co-Director at the Center for Environment Science and Policy of the Freeman Spogli Institute for International Studies and a Senior Fellow in the Stanford Woods Institute for the Environment. Schneider served as a consultant to federal agencies and White House staff in the Richard Nixon, Jimmy Carter, Ronald Reagan, George H. W. Bush, Bill Clinton, George W. Bush and Barack Obama administrations.

Richard Siegmund Lindzen is an American atmospheric physicist known for his work in the dynamics of the middle atmosphere, atmospheric tides, and ozone photochemistry. He has published more than 200 scientific papers and books. From 1983 until his retirement in 2013, he was Alfred P. Sloan Professor of Meteorology at the Massachusetts Institute of Technology. He was a lead author of Chapter 7, "Physical Climate Processes and Feedbacks," of the Intergovernmental Panel on Climate Change's Third Assessment Report on climate change. He has criticized the scientific consensus about climate change and what he has called "climate alarmism."

Kevin Edward Trenberth is part of the Climate Analysis Section at the US NCAR National Center for Atmospheric Research. He was a lead author of the 2001 and 2007 IPCC Scientific Assessment of Climate Change and serves on the Scientific Steering Group for the Climate Variability and Predictability (CLIVAR) program. He chaired the WCRP Observation and Assimilation Panel from 2004 to 2010 and chaired the Global Energy and Water Exchanges (GEWEX) scientific steering group from 2010 to 2013. In addition, he served on the Joint Scientific Committee of the World Climate Research Programme, and has made significant contributions to research into El Niño-Southern Oscillation. 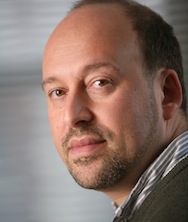 Gavin A. Schmidt is a climatologist, climate modeler and Director of the NASA Goddard Institute for Space Studies (GISS) in New York, and co-founder of the award-winning climate science blog RealClimate.

The Second Assessment Report (SAR) of the Intergovernmental Panel on Climate Change (IPCC), published in 1996, is an assessment of the then available scientific and socio-economic information on climate change. It was superseded by the Third Assessment Report (TAR) in 2001. 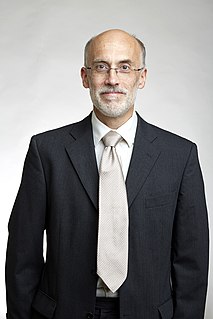 Jonathan Michael Gregory is a climate modeller working on mechanisms of global and large-scale change in climate and sea level on multidecadal and longer timescales at the Met Office and the University of Reading. 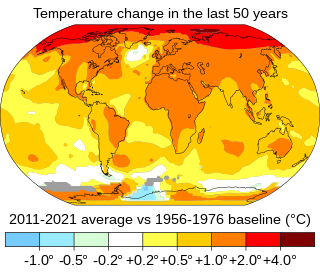 Global warming is the mainly human-caused rise of the average temperature of the Earth's climate system and has been demonstrated by direct temperature measurements and by measurements of various effects of the warming. It is a major aspect of climate change which, in addition to rising global surface temperatures, also includes its effects, such as changes in precipitation. While there have been prehistoric periods of global warming, observed changes since the mid-20th century have been unprecedented in rate and scale. 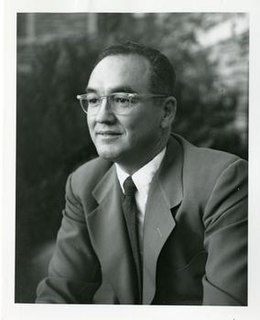 Walter Orr Roberts was an American astronomer and atmospheric physicist, as well as an educator, philanthropist, and builder. He founded the National Center for Atmospheric Research and took a personal research interest for many years in the study of influences of the Sun on weather and climate.

Kenneth Caldeira is an atmospheric scientist who works at the Carnegie Institution for Science's Department of Global Ecology. He researches ocean acidification, climate effects of trees, intentional climate modification, and interactions in the global carbon cycle/climate system. He also acted as an inventor for Intellectual Ventures, a Seattle-based invention and patent company headed up by Nathan Myhrvold.

Mark Zachary Jacobson is a professor of civil and environmental engineering at Stanford University and director of its Atmosphere/Energy Program. Jacobson has developed computer models to study the effects of fossil fuel and biomass burning on air pollution, weather, and climate. 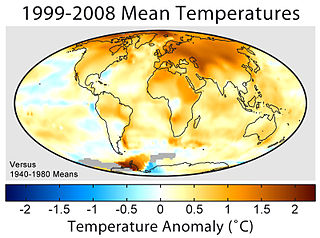 Regional effects of global warming are long-term significant changes in the expected patterns of average weather of a specific region due to global warming. The world average temperature is rising due to the greenhouse effect caused by increasing levels of greenhouse gases, especially carbon dioxide. When the global temperature changes, the changes in climate are not expected to be uniform across the Earth. In particular, land areas change more quickly than oceans, and northern high latitudes change more quickly than the tropics, and the margins of biome regions change faster than do their cores.

Warren M. Washington is an American atmospheric scientist, a former chair of the National Science Board, and currently senior scientist at the National Center for Atmospheric Research (NCAR) in Boulder, Colorado. 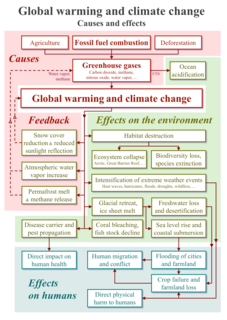 Climate change feedback is important in the understanding of global warming because feedback processes may amplify or diminish the effect of each climate forcing, and so play an important part in determining the climate sensitivity and future climate state. Feedback in general is the process in which changing one quantity changes a second quantity, and the change in the second quantity in turn changes the first. Positive feedback amplifies the change in the first quantity while negative feedback reduces it.

Carl Mears is a Senior Scientist, at Remote Sensing Systems, since 1998. He has worked on validation of SSM/I derived winds, and rain-flagging algorithm for the QuikScat scatterometer. He is best known for his work with Frank Wentz in developing a satellite temperature record from MSU and AMSU. Intercomparison of this record with the earlier UAH satellite temperature record, developed by John Christy and Roy Spencer, revealed deficiencies in the earlier work; specifically, the warming trend in the RSS version is larger than the UAH one.

Brian C. O'Neill is an American earth system scientist who studies the relationship between future societal development, emissions, and climate change impacts. O'Neill is known for interdisciplinary work on climate and human systems, in particular population and climate change. He was also involved in the development of the shared socioeconomic pathways (SSPs) to be used in scenario analysis. He served as a lead author for several Intergovernmental Panel on Climate Change reports.

Elisabeth Holland is an American climate scientist who focuses on how the carbon and nitrogen cycles interact with earth systems. She has become a key player in the international climate debate. She is currently a professor of climate change at the University of the South Pacific. She is also the director of the Pacific Center for Environmental and Sustainable Development.