Tomas Baranauskas (born September 12, 1973 in Kaunas) is a Lithuanian historian specializing in the history of medieval Lithuania. He is the author of the book The Formation of the Lithuanian State.

Baranauskas spent his youth in Žeimelis and Anykščiai. In 1998, he graduated from the Faculty of History at the Vilnius University. Since September 1996 he works in the Lithuanian Institute of History.

At the end of May 2000, he published The Formation of the Lithuanian State ("Lietuvos valstybės ištakos"). In the book Baranauskas argued that the Grand Duchy of Lithuania formed earlier than generally accepted; i.e. that the state was founded before King Mindaugas. The book received mixed reviews from the academics.

Since June 22, 2000, Baranauskas maintains the largest site on the medieval history of Lithuania on the Internet – "Medieval Lithuania". Since March 2003 he also administers the official website of the Lithuanian Institute of History. 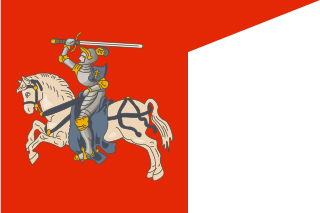 The Grand Duchy of Lithuania was a European state that lasted from the 13th century to 1795, when the territory was partitioned among the Russian Empire, the Kingdom of Prussia, and the Habsburg Empire of Austria. The state was founded by Lithuanians, who were at the time a polytheistic nation born from several united Baltic tribes from Aukštaitija.

The Pact of Vilnius and Radom was a set of three acts passed in Vilnius, Grand Duchy of Lithuania, and confirmed by the Crown Council in Radom, Kingdom of Poland in 1401. The union amended the earlier act of the Union of Krewo (1385) and confirmed the Ostrów Agreement (1392). Vytautas, Grand Duke of Lithuania, became fully in charge of the Lithuanian affairs, while Władysław II Jagiełło, King of Poland, reserved the rights of an overlord. After the death of Vytautas, Lithuania was to be ruled by Władysław II Jagiełło or his legal heir. The union is generally seen as strengthening of the Polish–Lithuanian union.

The Act of Mielnik or Union of Mielnik was an attempt to unite the Kingdom of Poland with the Grand Duchy of Lithuania in 1501. It was not ratified by the Lithuanian Seimas or by the Polish Sejm. The Act of Mielnik remained just a political project. Despite the failure to unify two countries into a single state, Poland and Lithuania were under a personal union until the Union of Lublin of 1569.

Voruta may have been the capital city of the Grand Duchy of Lithuania and the Kingdom of Lithuania during the reign of king Mindaugas in the 13th century. Voruta is mentioned briefly only once in written sources and its exact location is unknown. Despite all the uncertainties, the concept of Voruta is well-known and popular in the Lithuanian imagination.

Vaišelga or Vaišvilkas was the Grand Duke of Lithuania (1264–1267). He was son of Mindaugas, the first and only Christian King of Lithuania. 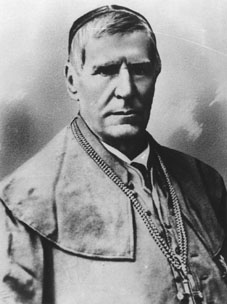 Lithuanian book smugglers or Lithuanian book carriers transported Lithuanian language books printed in the Latin alphabet into Lithuanian-speaking areas of the Russian Empire, defying a ban on such materials in force from 1864 to 1904. In Lithuanian it literally means the one who carries the books. Opposing imperial Russian authorities' efforts to replace the traditional Latin orthography with Cyrillic, and transporting printed matter from as far away as the United States to do so, the book smugglers became a symbol of Lithuanians' resistance to Russification.

The Battle of Skuodas or Schoden was a medieval battle fought in ca. 1259 near Skuodas in present-day Lithuania during the Lithuanian Crusade. The Samogitian army of 3,000 invaded Courland and on their way back defeated the Livonian Order, killing 33 knights and many more low-rank soldiers. In terms of knights killed, it was the eighth largest defeat of the Livonian Order in the 13th century. This victory led to a Semigallian insurrection against the Livonian crusaders, which lasted from 1259 to 1272. 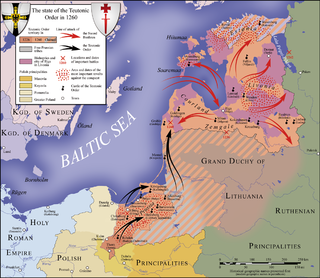 The first known record of the name of Lithuania is in a 9 March 1009 story of Saint Bruno recorded in the Quedlinburg Chronicle. The Chronicle recorded a Latinized form of the Old Church Slavonic word for Lithuania - Литва (Litva). Although it is clear the name originated from a Baltic language, scholars still debate the meaning of the word. 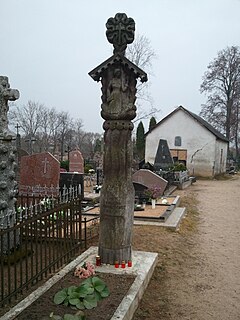 Karolina Proniewska or Karolina Praniauskaitė (1828–1859) was a romantic Polish-Lithuanian poet and translator, of Samogitian extraction. Born in Samogitia, a historical region of Lithuania, then part of the Russian Empire, she is sometimes referred to as a Samogitian Bard.

The Union of Kraków and Vilna also known as Union of Vilnius was one of the agreements of the Polish–Lithuanian union. It was signed in Kraków by Polish nobility on 6 May 1499 and Vilnius by Lithuanian nobility on 24 July 1499. 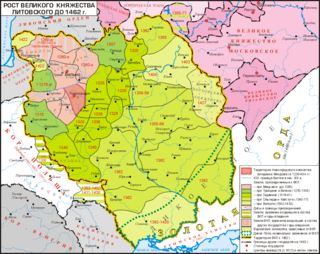 The Battle of Blue Waters was a battle fought at some time in autumn 1362 or 1363 on the banks of the Synyukha River, left tributary of the Southern Bug, between the armies of the Grand Duchy of Lithuania and the Golden Horde. The Lithuanians won a decisive victory and finalized their conquest of the Principality of Kiev.

Puntukas is the second-largest boulder in Lithuania. It is situated some 5 kilometres (3.1 mi) south of Anykščiai on the left bank of the Šventoji River. It was believed to be the largest stone in Lithuania until the discovery of Barstyčiai stone in the Skuodas district in 1957. 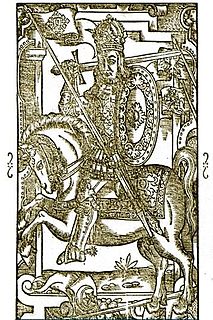 Mindaugas was the first known Grand Duke of Lithuania and the only Christian King of Lithuania. Little is known of his origins, early life, or rise to power; he is mentioned in a 1219 treaty as an elder duke, and in 1236 as the leader of all the Lithuanians. The contemporary and modern sources discussing his ascent mention strategic marriages along with banishment or murder of his rivals. He extended his domain into regions southeast of Lithuania proper during the 1230s and 1240s. In 1250 or 1251, during the course of internal power struggles, he was baptised as a Roman Catholic; this action enabled him to establish an alliance with the Livonian Order, a long-standing antagonist of the Lithuanians. During the summer of 1253 he was crowned King of Lithuania, ruling between 300,000 and 400,000 subjects. 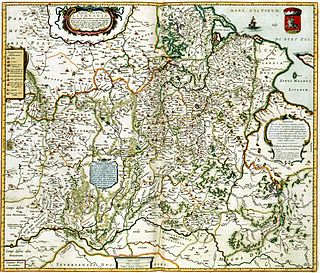 The history of Lithuania between 1219 and 1295 concerns the establishment and early history of the first Lithuanian state, the Grand Duchy of Lithuania. The beginning of the 13th century marks the end of the prehistory of Lithuania. From this point on the history of Lithuania is recorded in chronicles, treaties, and other written documents. In 1219, 21 Lithuanian dukes signed a peace treaty with Galicia–Volhynia. This event is widely accepted as the first proof that the Baltic tribes were uniting and consolidating. Despite continuous warfare with two Christian orders, the Livonian Order and the Teutonic Knights, the Grand Duchy of Lithuania was established and gained some control over the lands of Black Ruthenia, Polatsk, Minsk, and other territories east of modern-day Lithuania that had become weak and vulnerable after the collapse of Kievan Rus'.

Vykintas Vaitkevičius is a Lithuanian archaeologist.

The Lithuanian Auxiliary Police Battalions were paramilitary units (battalions) formed during the occupation of Lithuania by Nazi Germany between 1941 and 1944. Similar units, known as Schutzmannschaft-Bataillonen, were organized in other German-occupied territories of Eastern Europe. In Lithuania, the first battalions originated from units formed during the anti-Soviet Uprising of June 1941. Lithuanian activists hoped that these units would become the basis for the reestablished Lithuanian Army. Instead, these units were absorbed into the German military apparatus and aided German forces: guarded strategic objects, engaged in anti-partisan operations, participated in the Holocaust. The 12th and the 13th battalions, tracing their roots from the Tautinio darbo apsaugos batalionas (TDA), were particularly active in the executions of the Jews and were responsible for estimated 78,000 Jewish deaths in Lithuania and Belarus. While the battalions were often deployed outside Lithuania, they generally did not participate in combat. In total, 26 battalions were formed and approximately 13,000 men served in them. In July–September, 1944, the remaining units were combined into two Lithuanian Volunteer Infantry Regiments.

The Siege of Smolensk was an unsuccessful attempt to capture Smolensk by the forces of the Grand Duchy of Moscow in summer 1502. It was the last major military engagement during the Muscovite–Lithuanian War (1500–1503).