Tomas Ganz is an American physician-scientist who has made important contributions to innate immunology and the pathophysiology of iron regulation. [1] He was born in Prague, Czechoslovakia (now Czechia) in 1948, and immigrated to the United States in 1966. He studied physics at University of California, Los Angeles (UCLA) (B.S. 1970) and obtained a Ph.D. in Applied Physics from the California Institute of Technology in 1976 and an M.D. from the University of California, Los Angeles (UCLA) in 1978. In 1983, after receiving training in pulmonology and internal medicine, he became a faculty member at UCLA in the Department of Medicine. Later he received a joint appointment in the graduate program in Cellular and Molecular Pathology. He has studied the role of small peptide mediators in human physiology and disease. In 2005, he received the Marcel Simon Prize of the International Bioiron Society for the discovery of the iron-regulatory hormone hepcidin [2] and in 2014 was honored by the E. Donnall Thomas Award from the American Society of Hematology "... for his groundbreaking research in iron homeostasis, including the discovery of the iron-regulatory hormone hepcidin and investigation of its roles in iron metabolism". [3] He is also credited with the discovery erythroferrone, [4] the hormone produced by red cell precursors in the marrow to maintain the iron supply for the production of red cells. Currently he is a Distinguished Professor of Medicine and Pathology at the David Geffen School of Medicine at UCLA. [5]

Erythropoiesis is the process which produces red blood cells (erythrocytes), which is the development from erythropoietic stem cell to mature red blood cell. 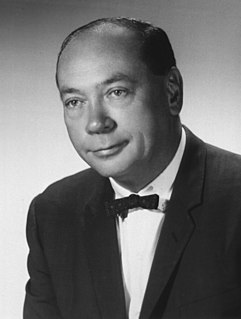 Earl Wilbur Sutherland Jr. was an American pharmacologist and biochemist born in Burlingame, Kansas. Sutherland won a Nobel Prize in Physiology or Medicine in 1971 "for his discoveries concerning the mechanisms of the action of hormones", especially epinephrine, via second messengers, namely cyclic adenosine monophosphate, or cyclic AMP.

Ronald Mark Evans is an American Biologist, Professor and Head of the Salk’s Gene Expression Laboratory, and the March of Dimes Chair in Molecular and Developmental Biology at the Salk Institute for Biological Studies in La Jolla, California and a Howard Hughes Medical Institute Investigator. Dr. Ronald M. Evans is known for his original discoveries of nuclear hormone receptors (NR), a special class of transcriptional factor, and the elucidation of their universal mechanism of action, a process that governs how lipophilic hormones and drugs regulate virtually every developmental and metabolic pathway in animals and humans. Nowadays, NRs are among the most widely investigated group of pharmaceutical targets in the world, already yielding benefits in drug discovery for cancer, muscular dystrophies, osteoporosis, type II diabetes, obesity, and cardiovascular diseases. His current research focuses on the function of nuclear hormone signaling and their function in metabolism and cancer.

Randy Wayne Schekman is an American cell biologist at the University of California, Berkeley, and former editor-in-chief of Proceedings of the National Academy of Sciences and Annual Review of Cell and Developmental Biology. In 2011, he was announced as the editor of eLife, a new high-profile open-access journal published by the Howard Hughes Medical Institute, the Max Planck Society and the Wellcome Trust launching in 2012. He was elected to the National Academy of Sciences in 1992. Schekman shared the 2013 Nobel Prize for Physiology or Medicine with James Rothman and Thomas C. Südhof for their ground-breaking work on cell membrane vesicle trafficking.

Anemia of chronic disease or anemia of chronic inflammation is a form of anemia seen in chronic infection, chronic immune activation, and malignancy. These conditions all produce elevation of interleukin-6, which stimulates hepcidin production and release from the liver, which in turn shuts down ferroportin, a protein that controls export of iron from the gut and from iron storing cells. As a consequence, circulating iron levels are reduced. Other mechanisms may also play a role, such as reduced erythropoiesis.

Human iron metabolism is the set of chemical reactions that maintain human homeostasis of iron at the systemic and cellular level. Iron is both necessary to the body and potentially toxic. Controlling iron levels in the body is a critically important part of many aspects of human health and disease. Hematologists have been especially interested in systemic iron metabolism because iron is essential for red blood cells, where most of the human body's iron is contained. Understanding iron metabolism is also important for understanding diseases of iron overload, such as hereditary hemochromatosis, and iron deficiency, such as iron-deficiency anemia.

Hepcidin is a protein that in humans is encoded by the HAMP gene. Hepcidin is a key regulator of the entry of iron into the circulation in mammals.

Ferroportin-1, also known as solute carrier family 40 member 1 (SLC40A1) or iron-regulated transporter 1 (IREG1), is a protein that in humans is encoded by the SLC40A1 gene, and is part of the Ferroportin (Fpn)Family. Ferroportin is a transmembrane protein that transports iron from the inside of a cell to the outside of the cell. Ferroportin is the only known iron exporter.

Michael Grunstein is a Distinguished Professor Emeritus of Biological Chemistry at the David Geffen School of Medicine at UCLA.

Michael Edward Phelps is a professor and an American biophysicist. He is known for being one of the fathers of positron emission tomography (PET).

Utpal Banerjee is a Distinguished Professor of the Department of Molecular, Cell and Developmental Biology at UCLA. He obtained his Bachelor of Science degree in Chemistry from St. Stephen's College, Delhi University, India and obtained his Master of Science degree in Physical Chemistry from the Indian Institute of Technology, Kanpur, India. In 1984, he obtained a PhD in Chemistry from the California Institute of Technology where he was also a Postdoctoral Fellow in the laboratory of Seymour Benzer from 1984-1988.

James S. Economou is an |American physician-scientist and university officer. He is currently the Vice Chancellor for Research at the University of California, Los Angeles (UCLA) where he is also a surgical oncologist and tumor immunologist. As Research Vice Chancellor at UCLA, he promotes academic entrepreneurship, transdisciplinary research, and support of the humanities, arts, and social sciences. The UCLA research enterprise generates almost one billion dollars in extramural funds annually.

Elizabeta Nemeth is an American physiologist who has made many contributions to the understanding of inflammatory disorders, thalassemias, and iron overload diseases.

Jonathan Braun is an American professor of pathology and pharmacology who has more than 140 peer reviewed articles.

Erythroferrone is a protein hormone encoded in humans by the ERFE gene. Erythroferrone is produced by erythroblasts, inhibits the production of hepcidin in the liver, and so increases the amount of iron available for hemoglobin synthesis. Skeletal muscle secreted ERFE has been shown to maintain systemic metabolic homeostasis.

Israel Lyon Chaikoff was a Canadian-American physiologist and biochemist, known for the Wolff–Chaikoff effect. He and his colleagues were pioneers in the use of radioactive iodine (iodine-131) to investigate thyroid function.

Johan Auwerx is a Belgian biologist, and a professor at the École Polytechnique Fédérale de Lausanne (EPFL). His research in the fields of cellular metabolism has contributed to a better understanding of the regulation of mitochondrial function by signaling pathways.

Patricia Anne Ganz is an American medical oncologist. She is a professor of health policy and management in the Fielding School of Public Health and a professor of medicine in the David Geffen School of Medicine at UCLA. In 2007, she was elected to the Institute of Medicine.